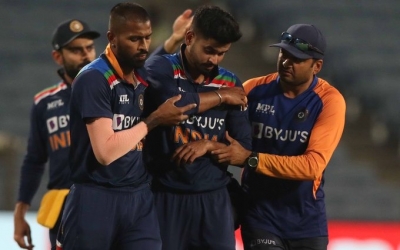 India overcame a Sam Curran threat to beat England by 7 runs at Pune to win the ODI series 2-1. This helped India complete a full rout, for they had earlier won the Tests 3-1 and the T20Is 3-2. Here are the marks out of 10 for India for the ODI series.

Even a perfect ten would not have been wasted on Bhuvneshwar. He was difficult to score off, even in the Powerplay overs when Jason Roy and Jonny Bairstow ran amok. Time and again he was summoned to stem the flow of runs or to strike. In a series where no other bowler conceded under 5.7 an over, he finished with 4.65. He is back.

Pant played twice. In the first, he registered his career-best, of 77. In the second, he improved even on that, by a run. He struck at 193 and 126, hit a six every nine balls, and was secure behind the stumps. Difficult to do better than that.

A fifty and a hundred helped Rahul silence his critics after his failure in the T20Is. He batted at a brisk pace, and looked firmly in control during both innings.

Dhawan provided India with two solid starts, and was unfortunate to not convert any of these to hundreds. Despite being out of contention in the other formats, there is little doubt that he is still a boss in 50-over cricket.

If Bhuvneshwar was canny and accurate, Thakur was the one who got the wickets at crucial points, and finished as the leading wicket-taker in the series from either side. Also played a crucial cameo in the third ODI.

Hardik’s batting got better as the series progressed. He was a delight to watch in the decider. He did not bowl in the first two matches; when he did, in the third, he impressed. Loses half a point for two dropped catches in the same match.

Krunal’s emotional 58 not out on debut was the most poignant moment of the series. He contributed again in the last match, but had an ordinary series with ball.

An average of 43 and a strike rate of 87 are the sort of numbers most batsmen strive for. Unfortunately, Kohli has set the bar so high that these seem disappointing. That hundred remains elusive.

The other Indian debutant of the series, Prasidh bowled with pace, taking 4/54 on debut. He went for runs in a high-scoring series, but generally impressed despite the occasional erratic phase.

Rohit reached 25 every time he batted but never went past 37. Not a great series for him, but it cannot be denied that he looked good every time. The next big innings is probably just around the corner.

Bowled 7 wides in his only match, probably an indication of lack of match practice. Dismissed Ben Stokes, and recovered well to bowl an excellent last over.

One disappointing outing, followed by an injury that will keep him out of action for weeks.

Taken apart by the English heavy artillery. A forgettable series.