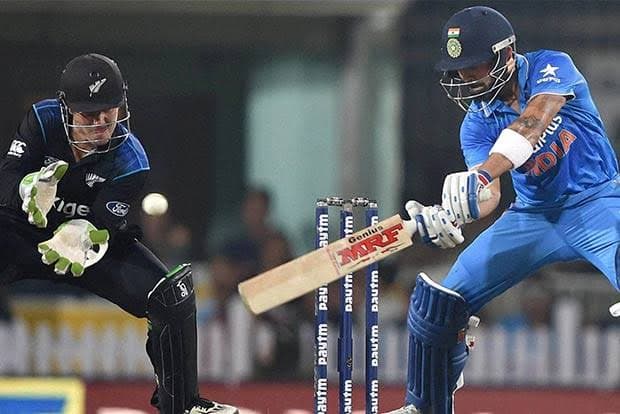 It isn’t often that India walk into a series these days in circumspect fashion. However, New Zealand has been a sort of an indifferent frontier for the Indian side in the past although they will point to the big series win last year in the country as a counterpunch to this above narrative.

New Zealand are India’s third opponents in 2020 with them having already played Sri Lanka and Australia in the year in short limited-overs series. The biggest takeaway from the recent series win against the Aussies was that Rohit Sharma and Virat Kohli are still in excellent form as they head to New Zealand.

The two limited-overs giants are the pillars of India’s batting line-up and it is unlikely that India will fare well if the two are strangled. What will encourage New Zealand is that they have two resources capable of doing exactly that.

Rohit Sharma’s nemesis has been swing and left-arm pace and he would have taken a huge sigh of relief when he came to know that Trent Boult was unavailable for this series. However, his woes against the Kiwis in their backyard – an average of 24 in T20Is and 36 in ODIs – has not just been owing to Boult.

Tim Southee (the first So) has had reasonably good success in not only keeping Rohit silent but also sending him back early on. He has dismissed Rohit five times in 149 deliveries he has bowled to the opener in ODIs and a further two times in T20Is in 30 deliveries.

Southee’s tally of eight dismissals across formats (a further dismissal in Tests) is the third-best for any bowler against Rohit after Angelo Mathews (10 dismissals) and Kagiso Rabada (nine dismissals). What is interesting is that seven of these eight dismissals have been caught out with seven of them coming early in Rohit’s innings (with his score at 20 or less).

The other challenge (or So) for India comes in the form of the tall leg-spinner Ish Sodhi. Sodhi and Mitchell Santner famously stifled India’s batsmen in the World T20 opener in 2016 in India. But even otherwise, Sodhi has had success against India, in particular against Virat Kohli.

Now, the Indian skipper is one of the finest players of spin bowling with his fluid wrists and exceptional shot-making abilities. However, in the recent series against Australia (and the series last year), Adam Zampa has shown us a chink in Kohli’s armour. The leg-spinner has thrived by bowling a shorter length at the Indian skipper at a quicker pace and mixing it up with googlies.

This is a template that Sodhi often follows in limited-overs cricket. The leg-spinner has the height to generate extra bounce and is generally quicker through the air. He has had success against Kohli too in the past, albeit owing to the Indian batsman’s high-risk approach.

In 72 balls in ODIs, Sodhi has conceded 89 runs to Kohli, conceding five fours and two sixes, but has also dismissed Kohli twice. In T20Is, he has had more success, dismissing him twice in 14 balls while conceding just 19 runs, good value for runs in the shortest format.

The challenge for New Zealand’s pair is execution against the two Indian top-order batsmen. Being the kind of batsmen they are, any deviation from the perfectly executed delivery could result in a quick role reversal of weaknesses.

In response to the present state of the COVID-19 pandemic in India, the BCCI and …