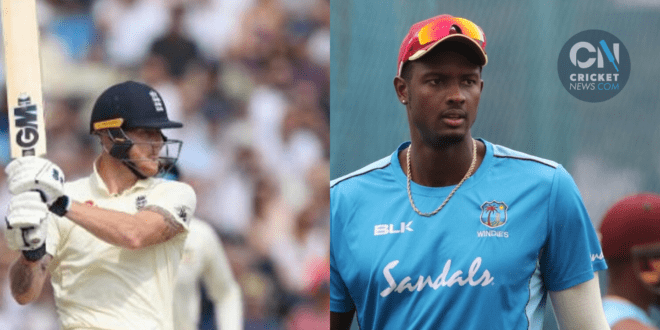 It might seem like there is not much to look forward to when England lock horns with West Indies at home in a three-match Test series starting with the first game at Southampton on July 8. After all, it’s a battle between a side that is one of the top four teams in the ICC rankings and another side which is one of the bottom dwellers in the same table.

However, if we look at the inside battles involved, there is actually a duel that could keep us on the edge of our seats throughout the series.

Any guesses about what it could be?

Never mind, let me tell you.

A battle of the beasts. A clash of the Titans. Call it whatever you like, but don’t make the mistake of calling it a David vs Goliath fight. For, there is no underdog or overwhelming favourite in this duel. It’s a battle between the No.1 and No.2 ranked all-rounders in Test cricket. It’s a battle of two equals!

Both of these players made their Test debuts pretty much around the same time. They didn’t have the best of starts to their careers but the selectors of the respective teams kept backing these players owing to the huge potential they had. After all these years down the line, their faith is finally bearing fruits as Stokes and Holder are two of the best all-rounders in the world at the moment.

Their performances have really shot through the roof in the last couple of years. Ben Stokes, in particular, has gone on to become one of the most recognizable faces in World cricket after his World Cup final and Ashes heroics last year. He is now considered as the best all-format all-rounder in world cricket.

However, Holder’s all-round performance has been a couple of notches higher than that of Stokes when we talk purely about Test cricket post 2018.

Table: Performance of all-rounders with a minimum of 500 runs and 25 wickets since January 2018

The table above shows how good Holder has been as compared to the other players. When you consider Stokes and Holder’s batting performance, there isn’t much difference as the West Indian’s average is only 4.5 units higher. But it is their bowling that makes the difference. Holder has proven himself to be a much better bowler during this period than Stokes. Moreover, his five instances of five-wicket haul are the most by any player during this period.

Table: Home and Away performances of Holder and Stokes since January 2018

In fact, if we look at Holder’s performances away from home from his debut till the pre-2018 period, his batting average read just 22 and bowling average was 40.15. That’s nowhere near to where a top all-rounder’s numbers should be. Moreover, he had quite a poor series the last time he visited England in 2017. Holder managed only 86 runs during the three-match series at a dismal average of 17.20 and picked up just eight wickets with the ball at a below-par average of 39.12 as well. So he has got a lot to prove even after his memorable last two years in the format.

Stokes, on the other hand, will be at his comfort zone as England are the home side. But there will be some pressure on him this time as he will be leading England in the first Test with their regular skipper, Joe Root, unavailable for the match. So Stokes’ added responsibility of captaincy makes this an even contest. He has no prior experience of leading the side even at the first-class level whereas Holder already has an experience of leading West Indies in 32 Test matches. This makes the duel between the duo quite even and only time will decide the fate of this contest. But after over three months without any international cricketing action, fate is least of the things we are worried about. All we want is to watch these fine players at the top of their game.

You can’t talk about Pakistan without talking about their fast bowling. Look at day …