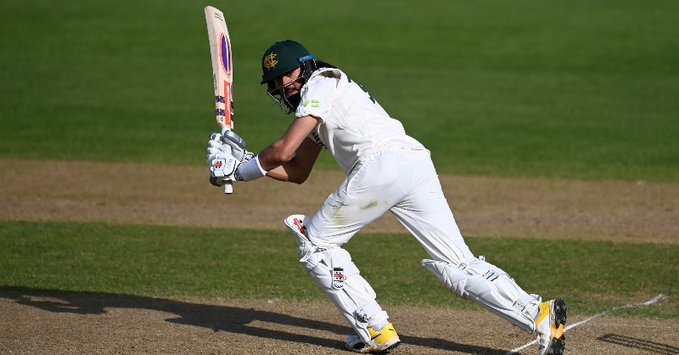 Haseeb Hameed waged a lone battle for the County Select XI, scoring more than half of the team’s 220/9 in response to India’s 311 on Day 2 of the only warm-up match, in Chester-Le-Street. It was Hameed’s third century of the season and eighth in his career.

Hameed made 112 in 246 balls, laced with 13 fours, on the day he got picked in the England squad for the opening two Tests. He stood firm at the crease, while the rest of the batting collapsed around him.

Resuming on 309/9, India only added two more runs before Craig Miles (4-45) bowled Jasprit Bumrah (5) in the 93rd over. Lyndon James and Liam Patterson-White picked up two wickets each, while Jack Carson had one to his name.

Umesh Yadav then gave India the first breakthrough by dismissing Jake Libby (12) in the ninth over. Both Robert Yates and Washington Sundar departed cheaply for one. Sundar, who featured for the County side after BCCI’s request to ECB, lasted only seven balls.

Hameed and Will Rhodes (11) then batted 15 overs to steady the ship. The partnership did not last long as Umesh returned in the 28th over and removed Rhodes to reduce County Select XI to 56/4.

Still, Hameed was unmoved at the crease. He took 134 balls to bring his fifty and 228 for his hundred. The 75-run fifth-wicket stand between him and Lyndon James (27) was the highest of the day. But Hameed fell soon after completing his century, to Shardul Thakur (1-31), before Patterson-White chipped in with a handy 49-ball 33 to take County Select XI to a respectable total.

Until the Hameed show, Indian seamers dominated the day. Ravindra Jadeja and Axar Patel did not have much of a workload. Umesh (3-32) and Mohammad Siraj (2-32) shared five wickets, while Jasprit Bumrah (1-29) had one to his name.