Pause, Rewind, Reminisce | The IPL 2010 Story: Bottling of Mumbai, Rising of Chennai, and many more

The eight city-based franchises returned to India for IPL 2010 after the second edition had shifted to South Africa. In 2010, the IPL became the first-ever cricket tournament to be broadcast live on Youtube. 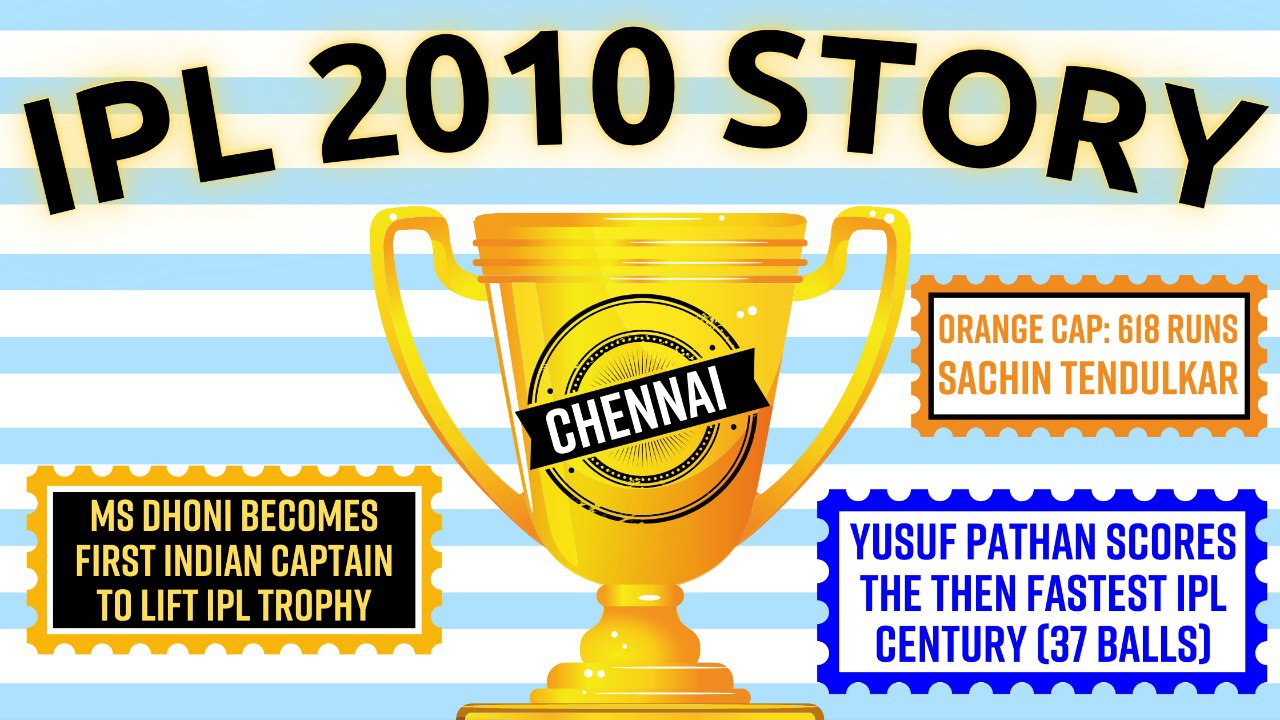 Within two years since its inception, newcomers like Ajinkya Rahane, Rohit Sharma, Virat Kohli and R Ashwin had been rubbing shoulders with legends like Sachin Tendulkar, Adam Gilchrist, Jacques Kallis, and Muttiah Muralitharan.

The tips they had received while sharing dressing rooms with the greats certainly helped India’s then-youngsters to rule world cricket at this point. This is what IPL keeps bringing to Indian cricket.

The eight city-based franchises returned to India for IPL 2010 after the second edition had shifted to South Africa. In 2010, the IPL became the first-ever cricket tournament to be broadcast live on Youtube. Moreover, the knockout stage matches were telecast live in 3D over 120 screens across the country.

Ahead of the third edition, Lalit Modi, Chairman and Commissioner of the IPL and the BCCI allowed the Indian Cricket League (ICL) cricketers to be part of the auction. Shane Bond, one of the ICL participants, became the joint costliest pick at around INR 3.4 crores, by Kolkata Knight Riders (KKR), alongside Kieron Pollard, who went to Mumbai Indians (MI).

Mohammed Kaif was the highest-paid Indian cricketer in that auction. Kings XI Punjab (now Punjab Kings) bought him for around INR 1.84 crores.

The seven-and-a-half minute strategic break after the ten-over mark, introduced in the second edition, was not well-accepted. Tendulkar, no less, said that it ‘breaks the momentum’. The IPL governing committee decided to reduce it to two breaks of two-and-a-half minutes per innings from IPL 2010.

The season introduced five new venues, Nagpur, Dharamsala, Ahmedabad, Cuttack and Navi Mumbai. For the first time in the tournament, there was also a third-place Playoff.

High hopes: some fulfilled, most didn’t

Led by Gilchrist, defending champions Deccan Chargers kept their form going. They finished second in the points table, with eight wins and six defeats. Tendulkar’s MI, on the other hand, topped the chart by quite a margin, with 10 victories.

Punjab notched up just four wins to finish with the wooden spoon in the season. Apart from Mahela Jayawardene (439 runs in 13 games), none of their batters (including Yuvraj Singh and Kumar Sangakkara) delivered attained potential.

Delhi Daredevils (now Delhi Capitals), KKR and Rajasthan Royals (RR) came fifth, sixth and seventh respectively. Unlike Punjab, each of these franchises put a fight to Chennai Super Kings (CSK) and Royal Challengers (RCB) until the last match of the league stage. In the end, they were separated by just four points before CSK and RCB joined MI and Hyderabad for the knockouts.

Road to the final

In the first semi-final, Pollard single-handedly demolished Bangalore to take Mumbai to the summit clash. He first smashed 33 off 13 balls to guide his side pile up 184/5, then had spectacular bowling figures of 4-0-17-3.

CSK reached the knockout stage for the third time in a row. Suresh Raina (520 runs in 16 games) once again reassured the world about his greatness. In the second semi-final, the Yellow Army bundled out Hyderabad for 104 after they posted 142/7. Doug Bollinger bagged the Player of the Match award after his 4-1-13-4 in that contest.

Time for the Glory

The stage was set for the final between two evenly-matched sides. However, riding on exceptional form throughout the campaign, Mumbai entered as favourites on paper to win the contest.

Chennai batted after winning the toss and put up a reasonable 168/5. Raina remained unbeaten till the end for his 35-ball 57, laced with three fours and three sixes. Apart from Dilhara Fernando (2-23), the other MI bowlers were being hit all over the stadium.

Coming at the chase, Mumbai lost Dhawan early. Tendulkar (48 off 45) rebuilt the innings with Abhishek Nayar (27) but both failed to accelerate. In the end, they lost by 22 runs but they could only blame themselves for that.

Despite nearly 14 runs an over required rate, they sent Harbhajan Singh, Ambati Rayudu, Saurabh Tiwary and JP Duminy ahead of the in-form Pollard after the departure of Tendulkar and Nayar. Pollard eventually came at No. 8 and smashed 27 in 10 balls but it all came too late. MS Dhoni’s Chennai lifted the prestigious trophy for the first time.

With 618 runs in 15 games at 133, Tendulkar was adjudged the Most Valuable Player (MVP) of the season. Pragyan Ojha of the Chargers finished as the tournament’s top wicket-taker. He claimed 21 wickets at an economy rate of 7.29.

The season had seen many firsts in the organisational perspective, but all of that paled in comparison to what followed immediately after the final. Modi was stripped of his posts in Indian cricket and suspended by the BCCI after being accused of a wide range of financial impropriety, from rigging bidding deals, offering bribes, betting and money laundering. The decision came just after the IPL 2010 final. Following that, Modi fled to London.