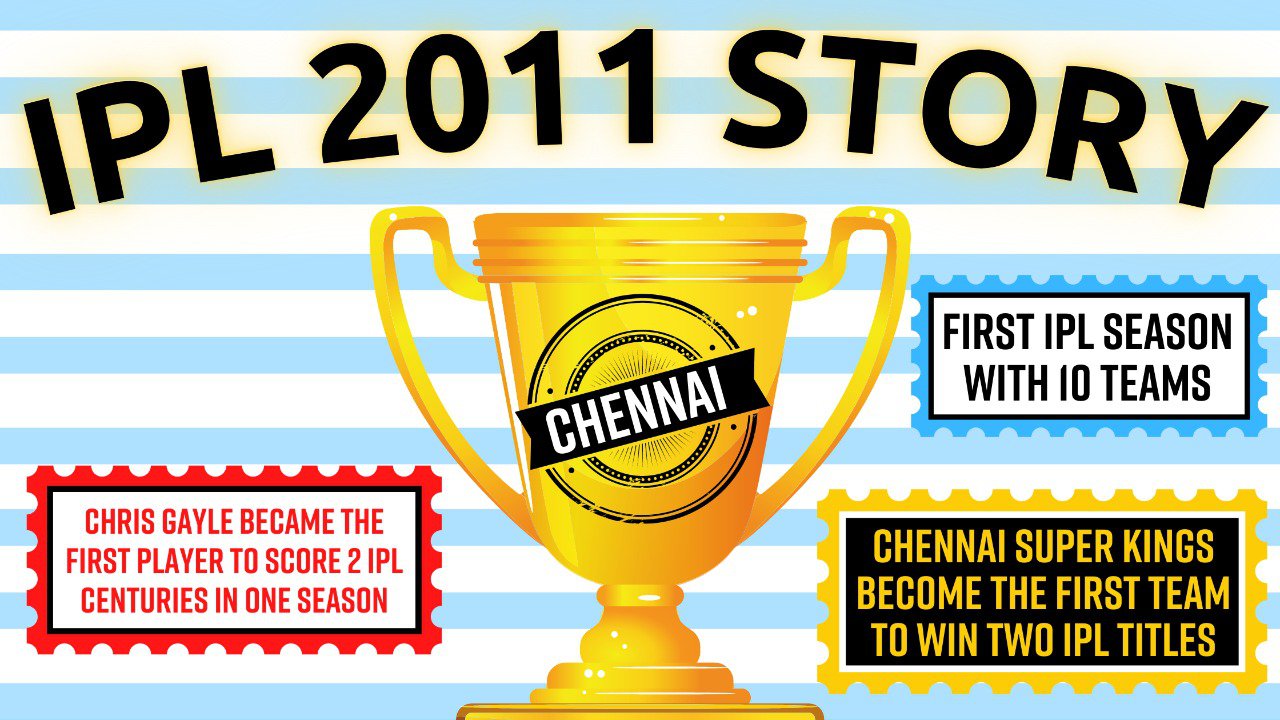 By the time the BCCI were all set to host the fourth edition of the Indian Premier League (IPL) in 2011, the tournament had already made its mark as the ultimate Twenty20 competition in world cricket.

After the expulsion of Lalit Modi for corruption charges following the third season’s final, Chirayu Amin was appointed as the new IPL chairman.

Led by MS Dhoni, defending champions Chennai Super Kings (CSK) came to the tournament as one of the favourites. However, the task in front of them just got tougher.

The season introduced two new franchises, Pune Warriors India (PWI) and Indi Commandos Kerala, who later changed to Kochi Tuskers Kerala (KTK). The ten teams were split into two groups of five. Teams in the same group went head to head twice and locked horns once with the others.

But the tournament still featured 74 matches, a steep rise from the previous year’s 60, raising the eyebrows of many.

For the first time, BCCI decided to introduce the Playoffs system at the business end of the tournament. Unlike the previous concept, involving semi-finals, this new format – based on the Page Playoff System – provided the teams finishing in the top two in the league phase the buffer of an extra match.

Ahead of the season, all ten franchise officials took part in the IPL auction once again to shuffle their roster with a maximum budget of INR 60 crores. Kolkata Knight Riders (KKR) found a new leader in Gautam Gambhir. The first player to go under the hammer at a base price of INR 1.5 crores, Gambhir was eventually sold at a record price of INR 11.04 crores. KKR later roped in Yusuf Pathan for INR 9.66 crores as well.

On the other hand, some of the biggest names of world cricket went unsold. These included, but were not restricted to, Sourav Ganguly, Brian Lara, Chris Gayle and Herschelle Gibbs.

And finally, cricketers were acquired by teams one would not associate them with. For example, Rahul Dravid went to Rajasthan Royals (RR), VVS Laxman to Kochi and Ganguly to Pune (around the halfway mark, after Ashish Nehra’s finger injury).

The curtain-raiser of the season was a nail-biting thriller, between CSK and KKR, at the MA Chidambaram Stadium in Chennai. CSK batted after winning the toss and put up a reasonable 153/4, with Srikkanth Anirudha top-scoring with a 55-ball 64.

Riding on a magnificent fifty of Jacques Kallis, KKR were in control throughout the chase until the 20th over. With eight runs to defend, Dhoni asked Tim Southee to bowl. Southee conceded just six from the final over, and KKR fell two runs short of their target.

The Re-arrival of the ‘Monster’

Royal Challengers Bangalore had not got the start they wanted in IPL 2011. They lost three of their first four games, and were struggling to strike the right balance – until they brought in Gayle for the injured Dirk Nannes. The replacement turned out to be one of the best in the history of the tournament.

Gayle acquired 608 runs in 12 matches at a phenomenal strike rate of 183. His arrival helped RCB to end the league stage at top of the points table, with 19 points (9 wins, 4 defeats, 1 no-result). He was yet to label himself the Universe Boss, but he returned with both the Orange Cap the Most Valuable Player (MVP) award. Virat Kohli finished second, with 557.

CSK finished just under RCB, while MI and KKR filled the remaining two spots for the Play-offs. All four teams were separated by just three points.

However, the debut campaign had not been a memorable one for any of the two new sides. Kochi and Pune finished eighth and ninth respectively, only over Delhi Daredevils (now Delhi Capitals).

The final played between the top two sides after the group stage, CSK and RCB, was a one-sided affair. Michael Hussey (63) and M Vijay (95) added 159 in 89 balls for the first wicket. Riding on that, CSK piled up 205/5, the second-highest team total in an IPL final after Sunrisers Hyderabad’s 208 in the ninth edition.

Coming at the defend, R Ashwin removed the dangerous Gayle for a three-ball duck. From there, RCB never came back into the contest and ended at 147/8.

Ashwin finished with 4-0-16-3 and his spin twin Shadab Jakati with 2-21, but Vijay bagged the Player of the Match award in the final. CSK became the first IPL side to successfully defend the title.

MI seamers Lasith Malinga (28) and Munaf Patel (22) picked up 50 wickets between them in IPL 2011. They topped the Purple Cap list, followed by Sreenath Aravind (21), Ashwin (20) and Amit Mishra (19). KKR’s Iqbal Abdulla was named the Emerging Player of the season. He claimed 16 wickets in 15 games at an outstanding economy rate of 6.10.