In the curtain-raiser, defending champions Mumbai Indians (MI) suffered a humiliating 41-run defeat against Kolkata, a side they traditionally dominate. In fact, Rohit Sharma’s men lost all five games in the UAE. 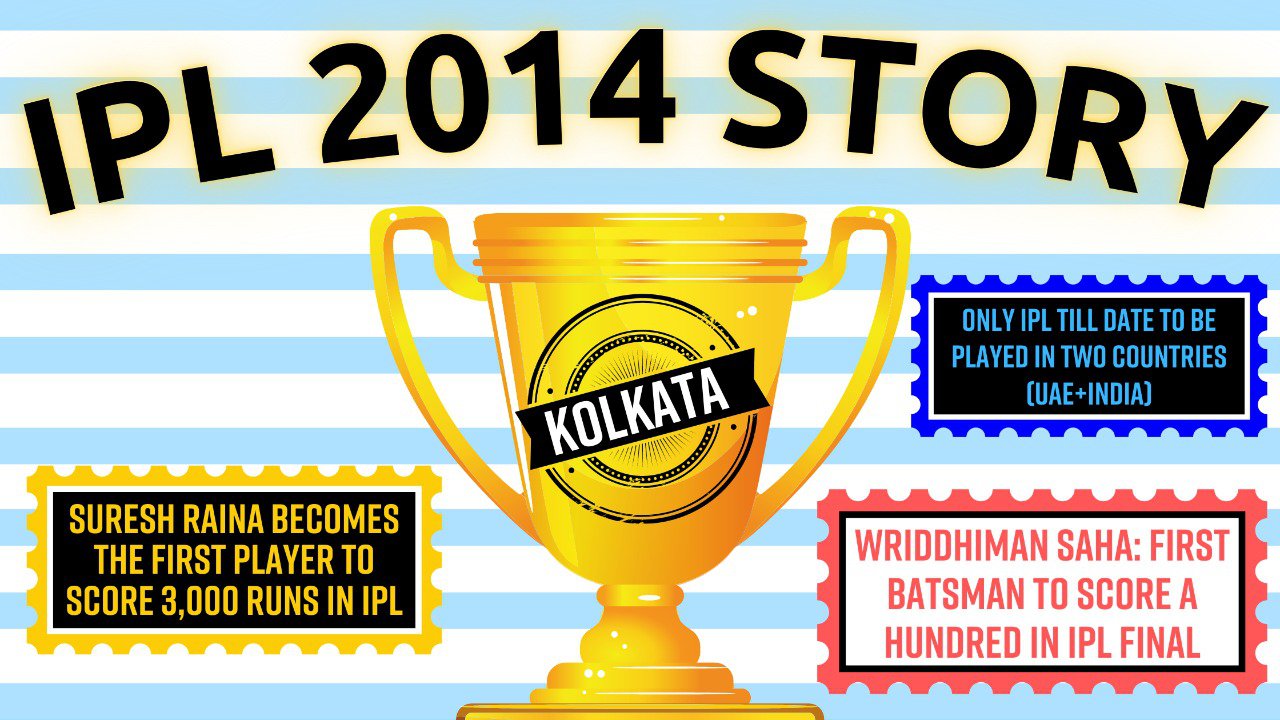 The first part of the seventh edition of the Indian Premier League (IPL) was shifted to the United States of Emirates (UAE) after it clashed with the 2014 Lok Sabha elections in the country. The UAE hosted the first 20 matches across three venues: Abu Dhabi, Dubai and Sharjah. Eight teams played five games each over this period. The rest of the tournament was played in India.

Royal Challengers Bangalore (RCB) made the biggest move of all in the auctions, by signing Yuvraj Singh at a record INR 14 crores. Dinesh Karthik was the second-coslitest pick. He went to Delhi Daredevils (now Delhi Capitals) for INR 12.50 crores.

Sunrisers Hyderabad (SRH) went all out for David Warner and finally got him for INR 5.50 crores. Keeping Warner’s incredible statistics in mind since then, it was arguably one of the most significant signings from an IPL auction, even today.

The season started on a shocking note. In the curtain-raiser, defending champions Mumbai Indians (MI) suffered a humiliating 41-run defeat against Kolkata, a side they traditionally dominate. In fact, Rohit Sharma’s men lost all five games in the UAE.

However, Mumbai came back strongly after returning to India and won seven out of their remaining nine matches. They finished fourth and qualified for the Playoffs. Their last league game was against Rajasthan Royals (RR). In that deciding contest to ensure their berth in the final stage, they chased down 190 in just 14.4 overs.

For the first time in an IPL campaign, Punjab began with a lot of energy. They were the only team to win all five games in the UAE, thanks to Glenn Maxwell’s stupendous form. In that stint, he amassed 300 runs at a strike rate of 201. He eventually finished as the third-highest scorer of the tournament with 552 at 188, which helped him to bag the MVP award. He got support from Virender Sehwag (455 at 144) and David Miller (446 at 149).

In stark contrast, Kolkata skipper Gautam Gambhir began IPL 2014 with a hat-trick of ducks, followed by a single-run knock. However, the revival of Uthappa came to the rescue. Uthappa was consistent throughout the season and had a streak of ten successive 40-plus scores. Eight of them came in Kolkata’s winning cause while chasing.

By only hitting 18 sixes in 16 games, Uthappa topped the Orange Cap list with 660 runs at 138. He remains the only person to win the Orange Cap and the IPL trophy in the same season. His closest competitors, Dwayne Smith (566 in 16) and Maxwell struck 70 sixes between them.

Despite six-hitting galore, the Indian spinners hogged the limelight once the IPL returned to India. At 42, Pravin Tambe did a hat-trick (in two balls), dismissing Manish Pandey, Yusuf Pathan and Ryan ten Doeschate of Kolkata. Chasing 171, Kolkata were in complete control, with 121/0 after 14 overs. They ended up losing by 10 runs.

The rise of Axar Patel in the grandest stage also took place in this edition. After being bought by Punjab at INR 75 lakhs, Axar returned 17 wickets at an economy rate of 6.14. He was adjudged Emerging Player of the campaign.

In Qualifier 1, Kolkata defeated Punjab by 28 runs to reach the final. Kolkata’s bowling unit, the most economical core in IPL 2014, rose to the occasion. After posting 163 in the first innings, they restricted dazzling Punjab batters to 135/8.

Mumbai’s efforts went in vain after they lost to Chennai in the Eliminator. Coming at bat first, Rohit Sharma’s men posted 173/8 but it was not enough. Suresh Raina’s unbeaten 33-ball 54 helped Chennai chase down the target with eight balls to spare.

Sehwag then smashed a 58-ball 122 to guide Punjab pile a mammoth 226 in Qualifier 2. Coming at the chase, Raina continued his momentum going and set the Wankhede stadium on fire. Riding on his 25-ball 87, laced with 12 fours and six sixes, Chennai reached the 100-run mark in the opening six overs. Unfortunately, they capitulated once Raina fell, and ended on 202/7.

The stage was set for the final between the two best teams of IPL 2014. Kolkata were on a streak of winning eight successive games before heading to this contest. Coming at bat first, Punjab skipper George Bailey (1) and their last-match centurion Sehwag (7) departed early. However, Manan Vohra (67) and Wriddhiman Saha (115) forged 129 runs for the third wicket to take them to 199. After six seasons of wait, Saha became the first to notch up a hundred in an IPL final.

In reply, Uthappa (5) failed to make an impact, but Manish Pandey (94 off 50) held the fort for Kolkata before the match came to a dramatic end.

Kolkata required 11 runs from the last seven balls. Piyush Chawla was on strike against Johnson, who had bowled five yorkers on the trot. He now went for the bouncer. Chawla had anticipated it: he hooked it over deep backward square for a six.