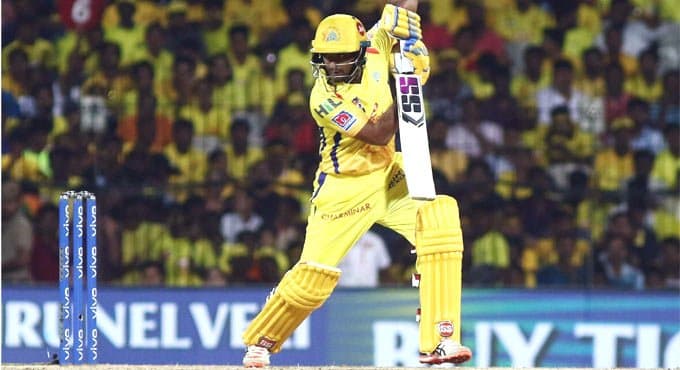 Scott Styris says he would go for Ambati Rayudu to replace Suresh Raina at No.3 for Chennai Super Kings (CSK) in the upcoming season of the Indian Premier League (IPL).

Raina won’t be available as the batsman returned home to India from the United Arab Emirates last month.

Styris said that despite the depth that CSK have in their squad, it will be a tough task to replace Raina, who is the highest run scorer in the competition for the three-time champions. “Personally, I’d put Rayudu in there to take that spot,” Styris said on Cricket Connected show on STAR Sports.

“Tough one, isn’t it, a player of that class, a player who has been so good for so long. He suddenly finds those runs, even in the field and [can bowl]; it’s going to be a big task [to replace him].

“I know that the CSK squad is deep, they’ve got a lot of options at the top, but I also believe that as much as the pressure is now on to find that No. 3, it’s just probably the most challenging time that I can look for anyway for CSK,” he said.

With CSK’s veteran spinner Harbhajan Singh also opting to sit out, Styris felt that it will be up to captain MS Dhoni and coach Stephen Fleming to keep the group together. While Rayudu is his option, he felt that the person who fills the vacant No.3 spot depends upon what the team wants from that position.

“A couple of options they could go with, the two overseas players at the top and bring in the youngster [Ruturaj] Gaekwad as well or they may decide to have a pitch-hitter. I know that Simon Doull, my fellow New Zealander, felt that Mitchell Santner could go to the top. Maybe even someone like [Ravindra] Jadeja, too, who we have seen in India colours, has been so good, so they need to find that No.3,” he said.

The 2020 edition of the IPL will be played in three bio-secure venues in the UAE. CSK will be playing the season opener against defending champions Mumbai Indians in a repeat of the 2019 final.