Earlier, Chennai piled 218/4 after Rohit Sharma asked them to bat. A magnificent 27-ball 72 not out from Ambati Rayudu, along with fifties from Moeen Ali (58 in 36 balls) and Faf du Plessis (50 in 28), guided CSK post a mammoth total. 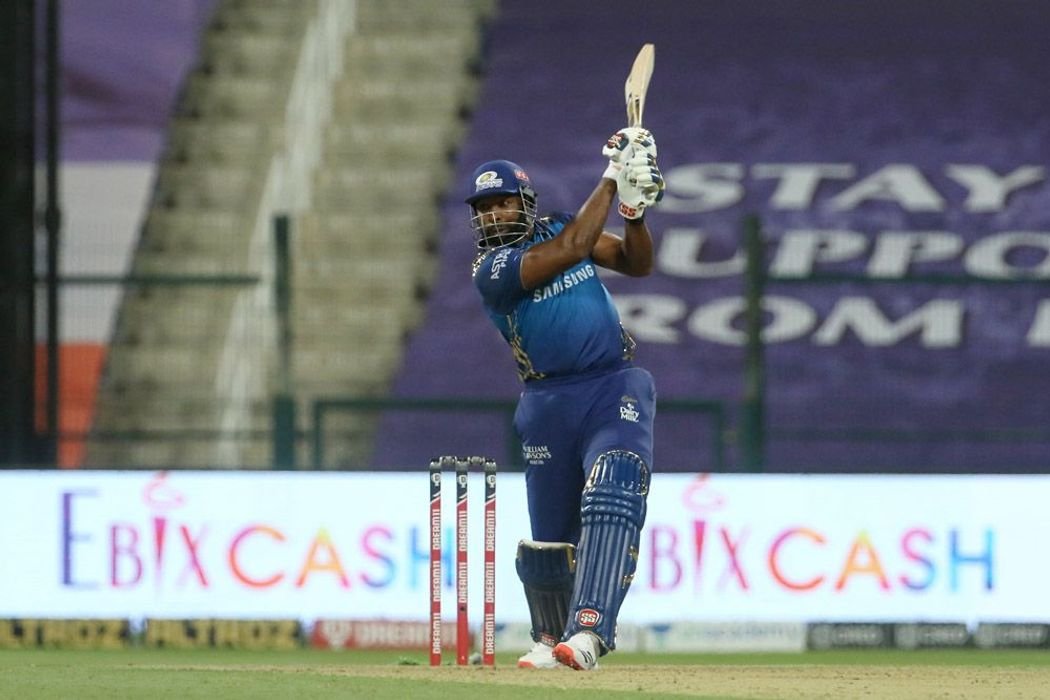 Kieron Pollard (87* in 34 and 2-0-12-2) single-handedly helped Mumbai Indians (MI) beat Chennai Super Kings (CSK) in Match 27 of the Indian Premier League (IPL) 2021 at the Arun Jaitley Stadium in Delhi. The victory strengthened Mumbai’s position at fourth in the points table, with four wins in seven matches. Chennai, on the other hand, are at the top, with five wins.

Mumbai needed 16 runs off the final six deliveries. Pollard was on strike, against Lungi Ngidi. Pollard denied a single off the first ball. Off the next two, he smashed two fours towards fine leg. He turned down a single again, then hit a massive six. He pushed the last ball to long-on and sprinted to win the contest for Mumbai.

Earlier, CSK piled 218/4 after Rohit Sharma asked them to bat. A magnificent 27-ball 72 not out from Ambati Rayudu, along with fifties from Moeen Ali (58 in 36 balls) and Faf du Plessis (50 in 28), guided CSK post a mammoth total.

Boult was at his best in the opening over; Ruturaj Gaikwad (4) closed the bat face early off Boult’s fourth ball while aiming to play towards leg. The ball took the leading edge and flew to Hardik Pandya at point.

Du Plessis and Moeen then added 108 runs off 61 balls in the second wicket to push Mumbai to the back foot at the midway stage. They acquired 51 runs in the last 17 balls of their stay against Rahul Chahar, Jimmy Neesham and Bumrah. Chennai were 111/1 after 10.4 overs.

In the 11th over, Bumrah removed Moeen after the latter cramped back before guiding the ball to Quinton de Kock’s gloves. Rohit then brought Pollard into the bowling attack. The gamble worked. Pollard got rid of du Plessis and Suresh Raina (2) in back-to-back deliveries to add drama to the contest.

Despite that, Rayudu with Ravindra Jadeja powered CSK to a blistering finish at the back end. They scored 82 runs in the last five overs.

Coming at the chase, Mumbai had got the start they wanted. Rohit and de Kock added 68 runs in the first seven overs without any harm to keep the asking rate in control.

In the eighth over, Shardul Thakur gave Chennai the first breakthrough, with the wicket of Rohit (35). The Mumbai skipper never seemed comfortable throughout his stay. Following that, Chennai spinners Jadeja and Moeen got the better of Suryakumar Yadav (3) and de Kock (38) in two successive overs to take Chennai back on the driver’s seat.

Pollard then set the stage on fire with a brutal counterattack. He made his presence felt by hitting three massive sixes off Jadeja’s third over and two more off Ngidi’s next. Thakur, too, felt the heat. He conceded 23 in the 15th over. Mumbai needed 50 runs in 24 balls to seal the match.

Sam Curran came to bowl the 17th over and began with three outstanding yorkers. He got rewarded with the wicket of Krunal Pandya (32). With that, the tenacious 89-run fourth-wicket stand got broken. Curran conceded just two runs off the over.

In the 19th over, Hardik smacked two sixes off Curran’s first two balls. However, the latter had the last laugh in the mini-battle. Shardul almost had Pollard in the 18th over before du Plessis, one of the best fielders of world cricket, dropped a simple catch at long-on. In the end, it cost Chennai the game.