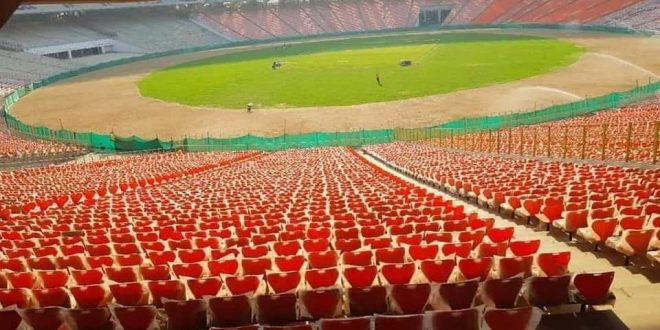 The Sardar Patel stadium in Ahmedabad, the world’s largest stadium with a capacity of 1.10 lakh, is likely to host the Indian cricketers in a training camp before the Indian Premier League 2020.

Around 26 players and 18 support staff members are likely to head to Gujarat and train in a bio-secure environment. Reportedly, Ahmedabad pipped Dharamsala as the venue due to its wide range of facilities and infrastructure.

The stadium has more than 70 corporate boxes, four dressing rooms, a club house and an Olympic-sized swimming pool.

Earlier, the chairman of the IPL Brijesh Patel had confirmed that the event will be held from September 19 to November 8 in the UAE.

“The teams need at least three to four weeks to prepare for the tournament.”

“We (the ECB) are going to send a press release on the issue tomorrow (Monday). But at this point in time, I cannot reveal more than that,” ECB’s Mubashir Usmani told Khaleej Times on Sunday.

The Indian board is likely to announce the dates and the venues of the training camp shortly.