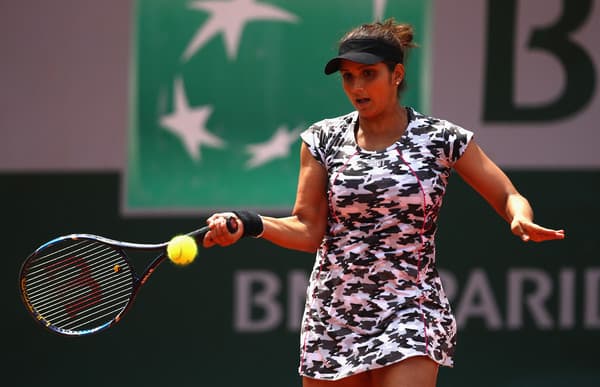 Returning to the WTA Tour after two years away, Sania Mirza won her first match back, reaching the quarter-finals of the Hobart International tournament in Australia on Tuesday. Together with her Ukrainian partner Nadia Kicherok, she beat the pair of Oksana Kalashinokova of Georgia, and Miyo Kato of Japan in a match that lasted an hour and 41 minutes, winning 2 – 6, 7-6 (3), 10 – 3.

In the next round, they will face the American pair of Christina McHale and Vania King, who upset the number four seeds, Spaniards Georgina García Pérez and Sara Sorribes Tormo.

Mirza is India’s most successful; tennis player of all time, becoming the first woman from her country to win a WTA title in Hyderabad. Two years later she reached a career-high ranking of 27 in the world, but a series of injuries forced her to turn her back on singles, and she began to concentrate on doubles instead.

She went on to achieve many things, including six Grand Slam titles – the women’s doubles in Melbourne, Wimbledon and Flushing Meadows, and the mixed titles at the Australian Open, Roland Garros, and the US Open. She also won the ATA Finals twice and was the number one ranked doubles player at one stage.

Sania last played a competitive match at the China Open in 2017, where she picked up a knee injury, She then decided to take a formal break from the game the following year, as she gave birth to a son, Izhaan, with her husband, the former Pakistan cricketer Salim Malik.

Not that her comeback got off to the best of starts. She and Kicherok both struggled in the first set and missed all seven break chances that they got, allowing their opponents to take an early lead.

The second set was better, although both pairs struggled to hold serve, Eventually, it went to a tie-break, which the Indian and her partner just managed to edge. However, the confidence began to flow back in the third set, and they swept past the opposing pair, with their return of serve particularly important.

It is still very early in her return to the tour though, and Sania will not be setting her expectations too high at this stage. It is not yet clear, for example, if the pair will contest the first Grand Slam of the season, the Australian Open which gets underway in Melbourne next week.

However, for the woman who has already earned US $6.9 million in prize money from the sport alone,  she has very little to prove, so just being back on the court is a victory in itself. And, if she wants to take inspiration from anybody, she does not need to look further than Serena Williams.

The 38-year-old American won her first singles title since returning from motherhood herself in Auckland on Sunday.