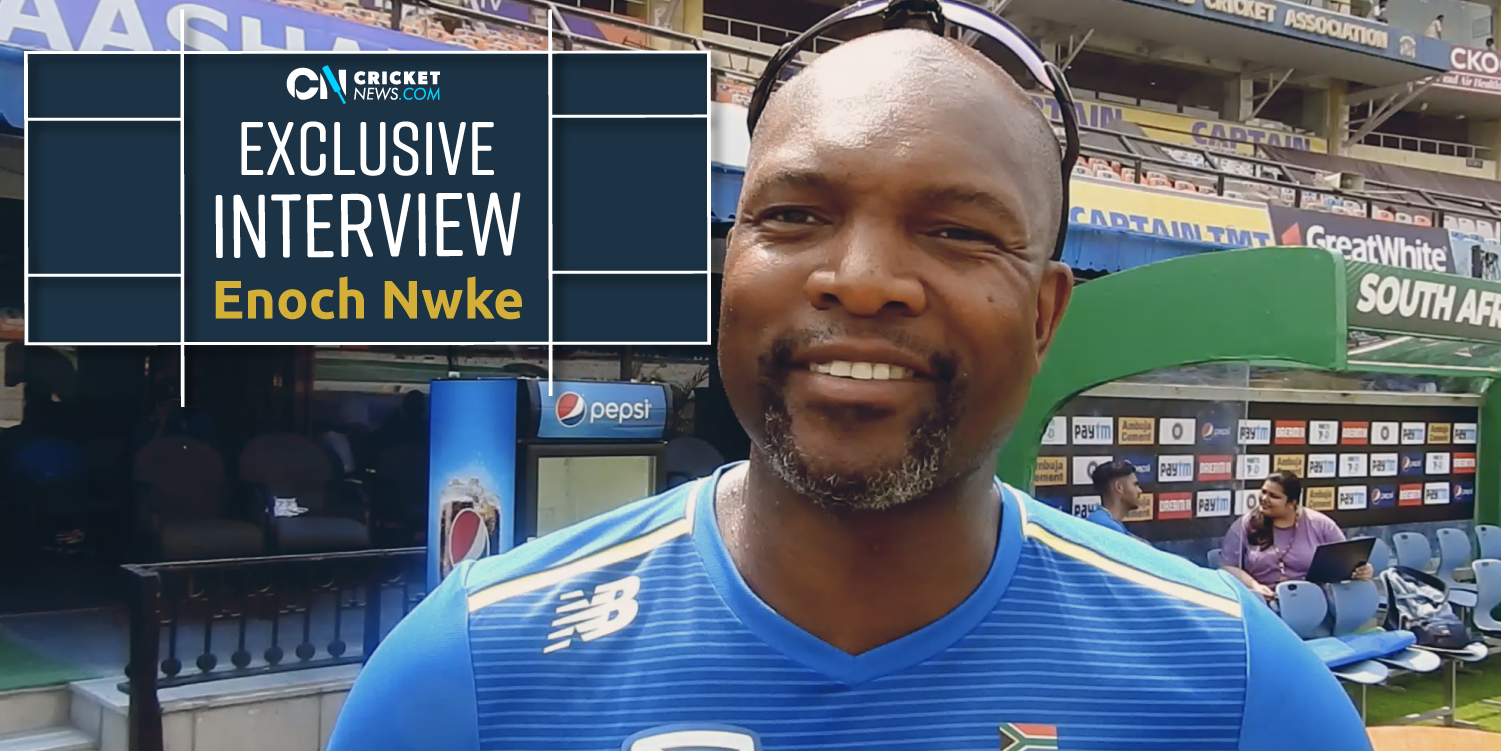 Our senior correspondent Sandipan Banerjee, recently met Nwke on the sidelines of the ongoing T20I series between India and the new-look Proteas. In an exclusive chat with CricketNews.com, Nkwe has spoken about the challenges in this tour of India and various other aspects of the contemporary South African cricket.

Here are the excerpts from the interview:

Cricket News (CN): This is your first assignment with the Proteas and a tour of India is probably the hardest assignment as they say in the cricketing world. How are you looking at this particular challenge as a coach?

Enoch Nwke (EN): Yeah I mean you know whole lot of people have been saying it’s a tough assignment. Yes we do acknowledge that it is a tougher assignment but we also look at it as an opportunity. For us especially in this transition phase; to put certain things in place because it’s not just about the now it’s about the next year, the next two years and the next four years. So, it’s going to be important that especially with the new crop of players. Some of them obviously not as experienced at this level but they find their feet as quickly as possible and obviously I mean the biggest investment is to ensure that you know we play good cricket where we remain competitive throughout and we would like to walk away with the win too.

So, we do understand that the opposition is in, you know, their backyard and we know what they can pull off. I mean they’ve been saying it that they want to walk away also with the win, start creating that winning culture so that’s what we want to do as well and we see it as a massive opportunity.

CN: Talking about the new players, some of them were with the South Africa A team in a recent tour of India and they have played both white ball and red ball cricket. You know that for some of them, these are alien conditions. So, do you think just one tour with the South Africa A team a few games against the A team are enough for acclimatization? I’m talking especially in context of the Test series.

EN: Look, I mean that it’s been a work in progress. Obviously I mean the challenge is how quickly you actually adapt to the conditions wherever you tour wherever you go around the world. And we’ve been fortunate this time around that the A team has been able to come out a couple of weeks beforehand and it just gives guys the players and obviously, those are gonna be involved in the Test series too. It will be an opportunity to just acclimatize and find the way of putting out a good performance. It is all about building confidence of individuals and hopefully by the time they come to the Test matches you know they’ve grown that confidence and we be able to remain as competitive as possible.

CN: Coach in previous tours we have seen that even on spinning wickets, someone like Dale Steyn running through the Indian team. He did in Nagpur and in Ahmedabad and South Africa winning those Test matches. So this time how challenging it will be for someone like Rabada to fill the shoes of Steyn?

EN: Yeah I mean look, you’re talking of an individual with a very strong character, an individual that is up for a fight that is that wants to be in those moments, when it’s almost like a break or make it type of a situation. I mean looking at what he has achieved over the years as a cricketer, Rabada is looking forward to the challenge. No matter what sort of condition he gets confronted with in whatever situation, he’s someone that has always lived up to the challenge and we are looking forward to that. I mean not only him, I think as a bowling unit they’re very excited and looking forward to adapting to the condition as quickly as possible and finding a way to make it work because ultimately you are not always gonna have a green top so whatsoever. It’s a matter of in that moment what really works for you and that will help the team to find a way to win the game so that’s going to be important and obviously the experience of Rabada. I know he’s, some may say he is, too young but I mean it just like I said you know in terms of what he’s achieved, he just proved that he can lead a bowling attack and he is very excited about the role and we are looking forward to that.

CN: From India’s point of view, there is already a notion amongst the fan that the rivalry between Rabada and Virat will be special, something like they recently witnessed between Jofra and Smith in the last Ashes series. What is your take on this?

EN: Well, look I mean they’re all quality cricketers. I mean we do respect them, and we respect them as human beings. I mean we’re just gonna take it a ball at a time and see what is out there you know ultimately their focus is on ourselves so that we get our game. Also, you know it’s not just about the leader of the Indian team it’s about the entire team you know that’s gonna also be our focus to ensure to find ways to come up with plans on how we can actually penetrate through that batting order and put ourselves in a winning position. So, like I said you know that so that we’re just gonna take it ball at a time and see how everything unfolds.

CN: Talking about penetrating the Indian batting order, India have decided to open with Rohit Sharma in the upcoming Test series and he has never done before in red ball cricket. So, for you is it an opportunity of putting the pressure back on Indians early?

EN: I mean whoever the 11 is you know; our mission is to come out here and win. We will put together all the plans possible and all the necessary tools for the players to ensure when they go on the field above the boundary they they’re well-equipped and they’re ready for whatever situation or whatever opportunity and then we just take it from there. So we don’t want to look too much into who’s coming back into red ball cricket and so on. I think it’s gonna be important that we remain proactive and in that particular moment how do we actually deal with that moment so that’s gonna be the biggest focus.

CN: Last time when South Africa toured here, we had some of the turning pitches. In Nagpu, Ashwin turned the ball from the first session and it was turning square. So, my question is, what is opinion on this possible spin test in India? Also, with quite a few pace-bowling all-rounders in your side, do you think that reverse swing is going to be a big factor in the Test series?

EN: I mean it’s [spin test] been the talk we have spoken about it. As a team we’ve accepted the challenge that it could be turning pitches. And talking about dealing with that, we’ve been working hard behind the scenes, the guys have been working hard. I believe the Test guys just need to ensure that they trust their game plans and how they deal with the turning pitches and if it doesn’t turn you know what sort of a game plan they can have in place. So I mean we will have to just adapt as quickly as possible on whichever you know however the pitch behaves. Then we just take it from there.

CN: I know that you currently have a contract only for this the India tour. However, if your contract is renewed, I would like to know, what will be your long-term roadmap to deal with the fading domestic structure back home, especially from the point of view of players leaving South Africa and taking up professional club contracts in other countries?

EN: I mean look, the system will carry on. Certain individuals, they decide to take that route in life and that happens, we respect that. But we have lot of cricketers. It’s not like that we are running out of cricketers. Obviously, it will take a bit longer you know to produce quality but in terms of what we have in a system, you know, we trust the calibre of players. A lot of quality players that are coming through the ranks and we obviously we try and expose them as quickly as possible.  In fact, these A series you were talking about earlier, are important platform where they can gain as much experience as possible and play against tougher oppositions. Bring them over to India and let them actually learn I mean it’s not just about cricketing experiences, I think it’s also life experience which contributes to them surely as you may be so that’s gonna be important.

A good number of college cricketers are coming through. I mean you’ve seen it already with the SA. Though the results haven’t gone quite our way but we strongly believe that we’re building a good base of cricketers. Hopefully they’ll represent the Proteas in the future.

CN: Well coach, from the upcoming challenges’ point of view, this is a tough phase for South Africa. First India then the England at home and then I guess Australia is also coming. In this transition period, it seems like a massive season for the Proteas. Perhaps an ideal screen-test for the new boys, isn’t it?

EN: Absolutely. I mean that’s what you want. I think that’s and that’s an ultimate. I mean personally as a coach if I do get on a full-time basis you know it’s a great opportunity to play against some of the best in the world. I mean especially in this transition phase just to see how the team responds and see what sort of a character that team is when we play against some of the best in the world. So, that’s gonna be important that you know we prepare currently and we’re ready for those challenges and hopefully we just keep building from one service to another  and hopefully we can walk away at the end of a season with good confidence especially with the new crop of players and we can go into. So yeah, I’m hopeful that we go into the World Cup [T20 World Cup] with strong bunch of players that we believe can win the World Cup for South Africa. However, for now the focus is purely on the Indian series and then we will reassess and see where we are. It’s gonna be a long training and we’re gonna be patient with that and allow these players to be the best can be.