In what was a topsy-turvy day of Test cricket, the balance of the game oscillated from one extreme to another as sides kept squandering away advantageous position. 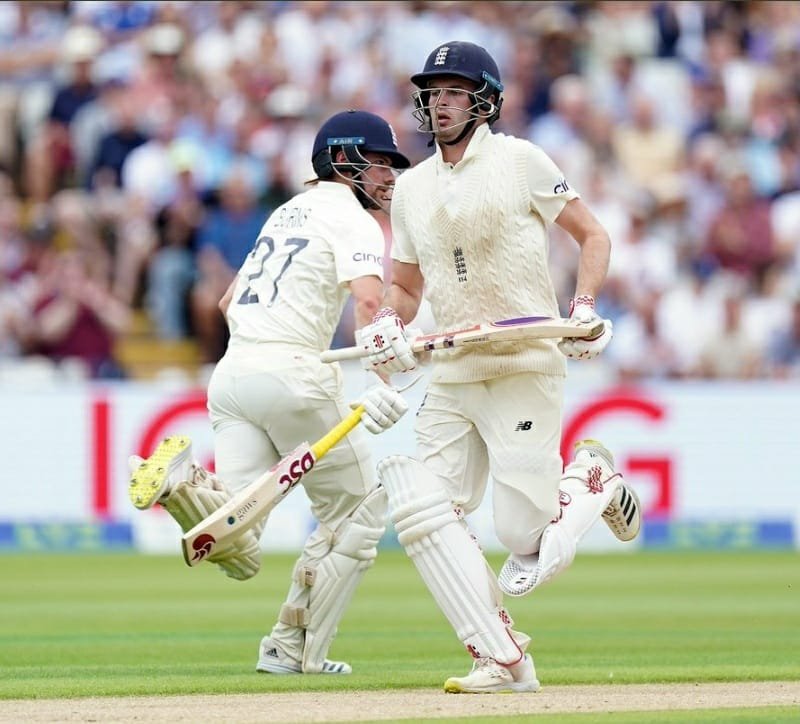 In what was a topsy-turvy day of Test cricket, the balance of the game oscillated from one extreme to another as sides kept squandering away advantageous position.

England’s openers laid a solid platform, but three wickets in the space of 18 minutes after the lunch landed them in a spot of bother. Trent Boult picked two wickets in successive deliveries to reduce the hosts to 175/6.

But New Zealand failed to wrap up the innings as quickly as they would have liked to. They were kept at bay by Daniel Lawrence (67*), who, with a little help from Olly Stone and Mark Wood (16*), led the rearguard to take England to 258/7 by stumps on Day 1. Matt Henry, Boult, and Ajaz Patel picked up two wickets each.

Eighteen thousand fans were greeted with an oddly joyless, dour, featureless cricket as Rory Burns and Dom Sibley batted like they had nothing to contribute to the gloom. While compact and heedful, they appeared to have forgotten their strokes. They played like protagonists of absurdist literature, devoid of charm and purpose. But that was exactly what they were expected of in the first hour of the contest.

However, the nothingness of the first hour gave away to a relatively entertaining second, where both batters cashed on and entertained the crowds with enchanting strokes. Sibley’s drives were not checked into a defensive tap, played flicks and cuts that were as fluent as it gets. Burns too got a couple of boundaries in meantime.

They went into lunch unscathed at 67. It was an achievement of some sort, for the world, in recent times, is not used to see England openers resisting their separation for such a long duration. Andrew Strauss and Alastair Cook were the last English opening duo to bat out the whole session, more than a decade ago.

From a nihilist perspective, every ball that you survive brings you a step closer to dismissal. Two hours of grind, and then comes the nemesis, a ball with your name written on it. Sibley’s came via Matt Henry and took a faint outside edge to fell in the safe hands of Tom Blundell.

Where the first session was a brilliant display of defiance from the openers, the second eased into more familiar territory, with brittle batting line-up getting exposed, again. Zak Crawley has been found vulnerable against balls angling away from him, and Neil Wagner didn’t waste much time testing him with the exact delivery, and got the exact result that he would have hoped for.

Crawley has picked up a detrimental habit of poking into things that should have been left alone, like feline suffering from psychogenic alopecia grooming its fur for no rhyme and reasons.

Burns, however, kept going on, amidst the rubbles and ruins. He reached fifty, and forged a significant partnership with Lawrence. Burns’ innings was the one good thing in an otherwise chastening afternoon for England. Not long ago he was dropped from the side. But such has been his turnaround in the last few months, he is definitely one of the first names on the paper for England for the rest of the summer at least.

Boult found himself on the cusp of a hat-trick when removing Burns and James Bracey with almost similar deliveries – he lured both men for the drive – before Stone did well to survive the next ball.

Stone rode on luck. Two off his outside edges fetched boundaries, but he stayed there for over an hour to arrest the collapse. On the other end was Lawrence, who did the bulk of the scoring. Although a bit scratchy in the beginning, Lawrence never hesitated to play his shots. His first few boundaries were lucky, but he later showed his versatility with swivel pulls and some flashy drives off Neil Wagner.

Stone was eventually dismissed while trying to sweep Ajaz Patel, while Lawrence got his third Test fifty soon after. Stone’s dismissal came just before the second new ball was taken.

Boult and Henry then bowled in tandem for the last half an hour, and were unlucky to not get any wickets despite posing frequent problems. Lawrence is batting on 67, with Mark Wood unbeaten on 16 from the other end.