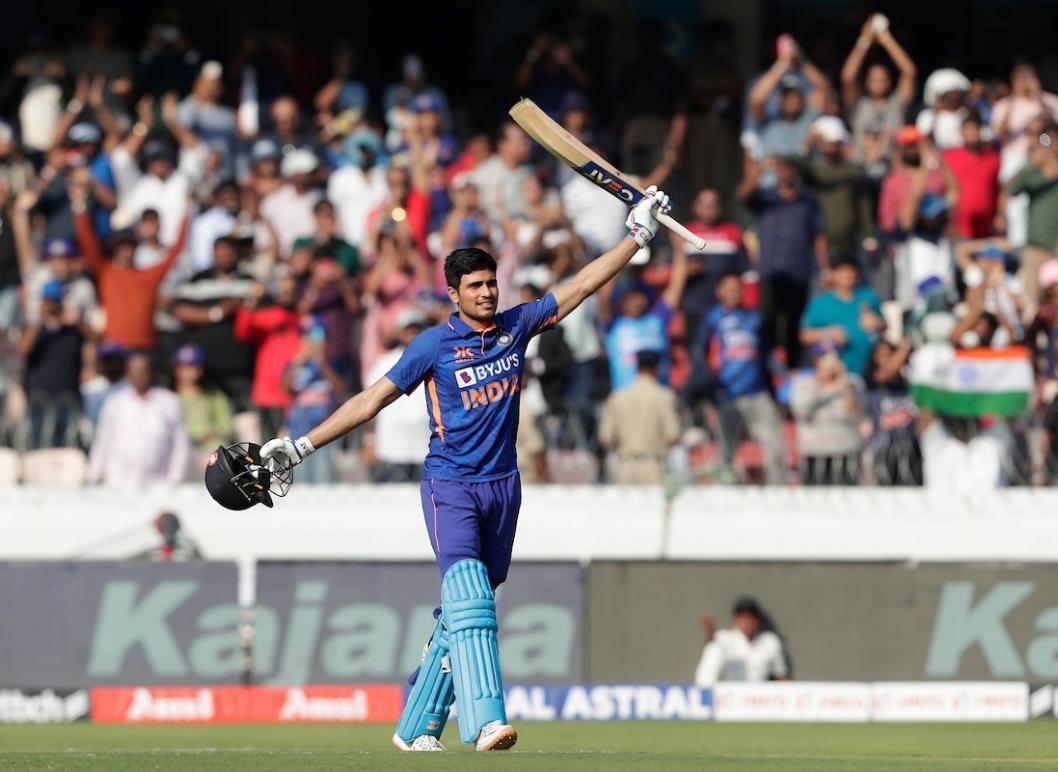 Shubman Gill shone under the skies of Rajiv Gandhi International Stadium in front of 31,187 spectators to become the youngest player to score a double century in one-day internationals, before Michael Bracewell gave India a scare with his sensational knock, almost helping New Zealand chase down 350.

But, near the end, he ran out of support and was the last man to fall for the Blackcaps with four balls remaining in the chase, giving India a 12-run victory and a 1-0 lead in the three-match series here on Wednesday.

On a two-paced pitch where no other Indian batter reached 35, Gill, regarded as the future leader of the Indian batting line-up, delivered an opening masterclass, scoring 208 off 149 balls with 19 boundaries and 9 sixes.

Gill was a dominant force in the hosts' innings, becoming the fifth Indian player to score a double century in ODIs. He was smashing boundaries against pacers and spinners in a pristine display of batsmanship, whether in the first power-play or in the death overs.

In response, New Zealand were 131/6, with Bracewell hitting 12 fours and ten sixes in his 78-ball knock, while adding 162 off only 102 balls for the seventh wicket.

India was put under tremendous pressure, and it needed wickets from local lad Mohammed Siraj, who took 4/46, as well as Hardik Pandya and Shardul Thakur taking a wicket each at the end to give the hosts a sigh of relief, with New Zealand all out for 337.

Gill struggled at first before leaning into a drive off Lockie Ferguson in the sixth over. He dispatched Blair Tickner with ease, pulling him twice over mid-wicket to bring India's total to fifty in 8.4 overs.

He could have been out on 45 off Bracewell had captain Tom Latham not missed catching and stumping opportunities in the 19th over. On the fifth ball of the over, he reached his fifty with a slog-sweep over deep mid-wicket for six.

But he was losing partners at the other end, as Santner got enough turn to hit the top of Virat Kohli's off stump, and Ishan Kishan, who was playing for the first time since slamming 210 against Bangladesh, edged a short of length delivery straight to Latham off Ferguson.

The young opener clipped and drove for boundaries against Tickner and Daryl Mitchell before capitalising on a short ball from Santner by pulling over mid-wicket for a one-bounce four. Suryakumar Yadav joined Gill in a 65-run partnership before the latter chipped straight to cover off Daryl Mitchell in the 29th over.

Gill reached his century in 87 balls after using depth of crease to pull Santner off the backfoot over mid-wicket for six. He continued to drive against spinners with his feet while whipping and pulling off pacers with contempt. When Shipley couldn't hold on to a sharp caught and bowled chance in the 38th over, he was given a reprieve.

On the next ball, he rubbed salt in the wound with a quality off-drive for a four. His outstanding performance against spinners continued when he pulled Santner off the backfoot over mid-wicket for six and then reached his century by dancing down the pitch to swing Bracewell over wide long-on with the turn for a massive maximum.

Giving him company was Hardik, who hit three boundaries in a 38-ball 28 before missing a Mitchell delivery while attempting to cut him off in the 40th over, as replays showed bail on off stump came off after the keeper collected it cleanly, ending a 74-run partnership, which was quickly followed by Washington and Shardul.

Gill ended a run of four boundary-less overs in the 48th over by smacking sixes over leaping long-on and square leg off Tickner. Gill reached his double century in the 49th over, smacking a hat-trick of sixes over fine leg, long-off, and straight down the ground, roaring and waving his bat in delight as the crowd chanted his name.

He would bow to acknowledge the standing ovation. Gill would hit another six over long-on in the final over before being caught for 208 by a deep mid-wicket fielder.

Siraj, Kuldeep, Shami, and Shardul destroyed the Blackcaps' defence of 349, leaving them at 131/6 in 28.4 overs. Santner gained momentum by dispatching anything overpitched and short to the boundary rope off Hardik and Washington, while Bracewell slashed, pulled, and swept well against spinners.

In the 37th over, Shardul was brought back, and Bracewell hammered him over extra cover for four before completing his fifty with a pull over mid-wicket for six. He continued to be harsh on Shardul and Kuldeep, easily establishing his boundaries, with Santner joining in on the fun. As New Zealand needed 103 off the last ten overs, Bracewell hit Washington for sixes over long-off and wide long-on.

Mohammed Shami returned to end the partnership, but Bracewell moved across to scoop over fine leg for six. In the 43rd over, he smoked a six over long-on off Shami to complete his century in 58 balls. To get his fifty, Santner ran three boundaries off Shami and Siraj.

In the 46th over, Siraj brought India back into the game when Santner miscued a pull to deep midwicket and then got one to nip back in to rattle Shipley's stumps. Bracewell, on the other hand, stood tall, swinging Hardik for two sixes in the 47th over before taking a four and six off Shami in the 48th.

Hardik kept hopes of an Indian win high by getting Ferguson to hole out to long-off in the 49th over, conceding just four runs. With 20 needed off the final over, Bracewell hammered a short ball from Shardul over wide long-on for six. After a wide, Shardul finished things for India by trapping Bracewell plumb lbw with a dipping yorker. As DRS confirmed the ball hitting the stumps, India took a sigh of relief.