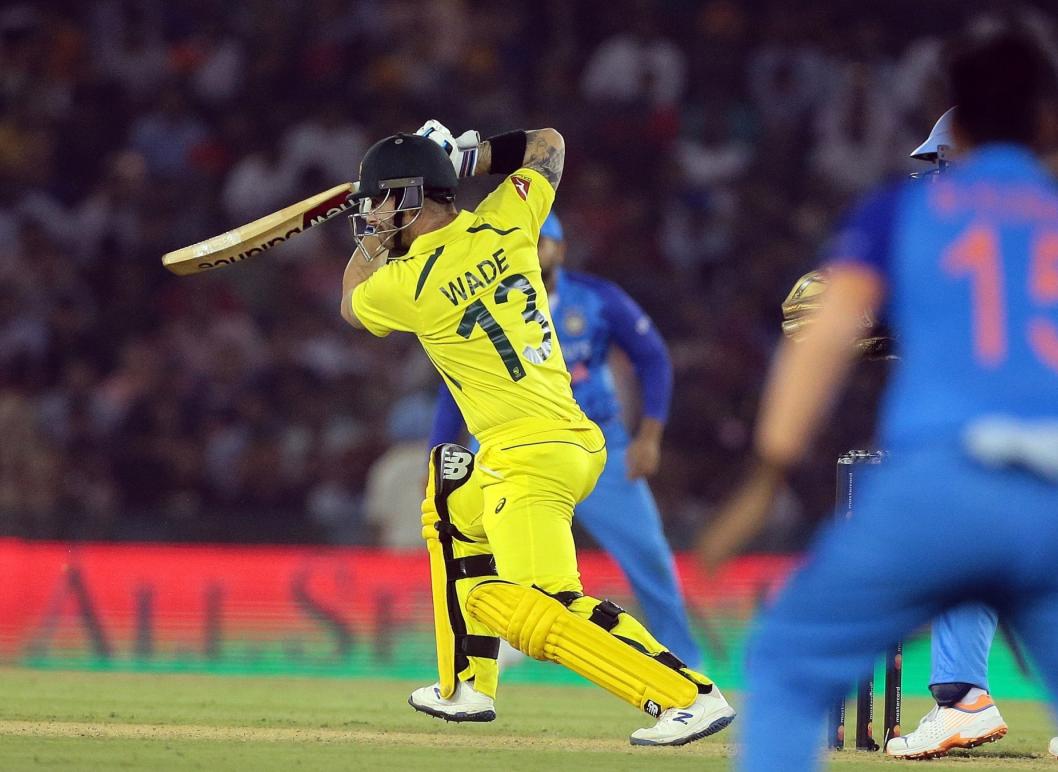 Taking India by surprise, all-rounder Cameron Green, who was playing as an opener in professional cricket at the time, and Matthew Wade led Australia to a crushing 4-wicket victory in the opening T20I and a 1-0 series lead on Tuesday.

Green recovered and delivered a commanding performance at the Punjab Cricket Association IS Bindra Stadium, blasting eight fours and four sixes in a 30-ball 61 after a calamitous final over in which Hardik Pandya smashed him for three consecutive sixes.

The 23-year-old didn't appear anxious at all despite starting the innings for the very first time in front of a full crowd. However, until Green stayed at the game, an experienced Indian bowling lineup appeared to be completely lost.

Australian openers Aaron Finch and Cameron Green immediately made their intentions known by setting a lofty goal of 209 runs. They enjoyed the swing of Bhuvneshwar Kumar and Umesh Yadav and scored 38 runs in the opening three overs.

However, Axar Patel entered the fray and bowled Finch out with a slider to give India a crucial breakthrough. Despite Finch's dismissal, Green was in no mood to slow down and took full advantage of the constraints, bringing Australia to 60/1 at the conclusion of the powerplay.

Steven Smith, who entered the batting order at position three, was content to take a backseat to Green as he continued to swing aggressively and reached fifty in just 26 balls. With their hundred, Australia was quickly sailing toward the target. In ten overs, they successfully completed more than half of the target.

The pleasant turnaround for India came during the drinks break when Axar, who had dropped Green on 40, made adjustments by taking out the hazardous batter. Kohli took a wonderful catch as Green lofted a big ball down to long-on and returned the opener following his 30-ball 61.

Steve Smith and Glenn Maxwell were both out in the same over by Umesh Yadav, who wasn't very efficient in his first two overs. Axar, who finished the day with 3-17 and was India's top bowler, subsequently bowled Josh Inglis around the legs.

Australia lost four wickets for 36 runs between the 11th and 15th over, creating an opening for India before Wade, who led the late push, successfully closed it.

Wade destroyed Harshal Patel (22 in one over) and Bhuvneshwar Kumar (31 in two overs) to finish the chase when 55 needed to be scored in the final four overs. He scored 45 runs off 21 balls while remaining unbroken, leading Australia to victory in 19.2 overs with four wickets in hand.

India was given the opportunity to bat first and made a slow start as the Australian pacers Josh Hazlewood and Pat Cummins began to move around the pitch. To counter that, India's opening batsmen Rohit Sharma and KL Rahul had to move down the track.

Rohit attempted a counterattack by playing some strokes as runs were not coming easily, and he struck Cummins for a six and four. He was fortunate once, but the India captain was dismissed while attempting a second flip shot when Nathan Ellis collected a superb running catch coming in from deep midwicket.

India had great expectations for the guy in form, Virat Kohli, but he wasn't able to accomplish anything since Australia had well-thought-out preparations for him. India was at 35-2 after 4.5 overs thanks to Adam Zampa, who came on early to set up a string of dot balls. After scoring 3 off 7 balls, Kohli attempted to sneak under Nathan Ellis but instead offered a straightforward catch to mid-on.

From that point on, Rahul and Suryakumar Yadav put up a strong 68-run stand to get India back into the match.

After taking his time, Rahul didn't miss anything in his hitting zone, and his pick-up shot in particular was excellent and netted him a few sixes. Suryakumar, on the other hand, was effectively supporting Rahul with his regular boundaries as the pair kept the run rate up and brought India to 86/2 after 10 overs.

Rahul, who has drawn flak for his sluggish strike rate, reached his century off just 32 balls and was on track to help India reach a significant total. However, he hit a fielder near the fine-leg fence on a pick-up shot.

Suryakumar increased his aggression after Rahul was dismissed and hit back-to-back sixes off Adam Zampa. He attempted to push Cameron Green to third man in the following over, but instead edged to the keeper. Axar Patel, a left-hander, was put in before Dinesh Karthik but only got a boundary in his five balls before being bowled out by Nathan Ellis on a slower ball.

Hardik Pandya and Karthik had to carry India after reaching 146-5 in 15.5 overs. Karthik was dissatisfied with his six runs scored, while Hardik shone like a star.

In just 26 balls, the all-rounder reached his half-century and then put on some back-breaking work. India reached 208/6 in 20 Overs thanks in large part to Hardik's three sixes off the final three balls of the innings, which were bowled by Cameron Green. Nathan Ellis, a medium pacer, was Australia's best bowler with a 3/30.