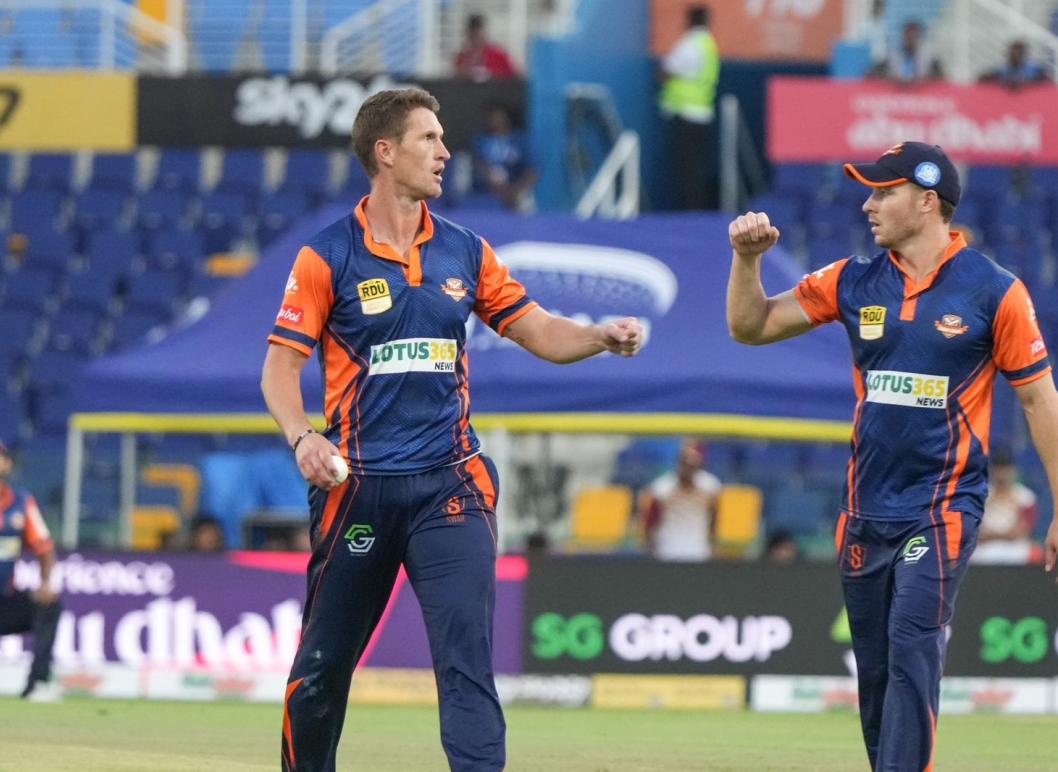 When Samp Army batted first, they only managed to score 100/5 in their 10 overs. Then, in their final five overs, they choked, limiting Bangla Tigers to 85/3 and securing a 15-run victory.

Bangla Tigers captain Shakib Al Hasan introduced himself for the first over and bowled to Samp Army openers skipper Moeen Ali and Johnson Charles after winning the toss and choosing to bowl first.

Moeen Ali and Charles scored 12 runs off the opening over when Moeen Ali blasted Shakib's fifth delivery for a six over long-on. The second over was bowled by Rohan Mustafa, who only conceded six runs, including a boundary by Charles to backward point.

A fantastic third over was played. With the first ball of the over, Benny Howell declared Moeen Ali out. Colin Munro received a high Ali strike from Howell at deep square leg, scoring 11. Howell cleanly bowled Johnson Charles for 7 with one more ball. In that over, Howell took two wickets and allowed just two runs to be scored.

Two of the best hard hitters, David Miller and Shimron Hetmyer, then entered the field. Six runs were scored in the fourth over that Matheesha Pathirana bowled with precision. Hetmyer delivered a six over extra cover in response to Howell's opening delivery. Samp Army's prized wicket, David Miller, was lost to the second ball when he was run out while attempting a second run and caught by Ben Cutting's throw for three.

As Pathirana forced Dwaine Pretorious to hit high to Cutting at long on for one run, wickets continued to fall. When Karim Janat, the next man, was dropped by Zazai at mid-off to the final ball of Pathirana's over, he had a fortunate escape. Samp Army's score at the end of the sixth over was 46 for 4.

Karim Janat and Hetmyer each smashed a boundary and a six off the bowling of Jake Ball in the eighth over. To set a manageable objective, the Samp Army still required some significant hits. The eighth over saw the reintroduction of Rohan Mustafa. Karim scored a boundary to mid-off, but he only allowed eight runs to be scored. The likelihood that the total would exceed 100 runs started to diminish.

Karim hit the final ball for a boundary, while Hetmyer hit the first pitch of Ball's ninth over for a six to long-on. Umair Ali of the UAE was asked to bowl the final over. He got Rohan Mustafa to catch Hetmyer at long off for 38. He hit two boundaries and three sixes off 21 balls.

The first ball George Garton faced was sent for a boundary. Then, after striking the penultimate ball of that over to Ball at deep mid-wicket, who dropped the catch and allowed a boundary, he struck the ball one more time. Samp Army scored exactly 100 for 5 in their first ten overs.

Hazratullah Zazai, the Bangla Tigers' opener, struck Sheldon Cottrell for three boundaries to start the chase. The first ball of the inning was pulled to mid-wicket, the third through extra cover, and the fourth to the backward point boundary. George Garton's second ball of the second over was also hit by Zazai for a six to square leg, but due to Garton's tight bowling, Zazai was unable to score any more runs.

Evin Lewis became aggressive in the third over, hitting Anrich Nortje for a boundary and a six off consecutive pitches. Lewis was dismissed for 14 by wicketkeeper Charles after being caught behind by Dwaine Pretorius in the fourth over, ending the 39-run opening partnership. In the fifth over, Zazai continued to punish Cottrell by hitting another six over midwicket. Bangla Tigers were exactly 50 for 1 after halftime.

The Samp Army bowlers then started playing some excellent bowling. Karim Janat's sixth over was brilliant, allowing just seven runs to be scored. Norte only allowed three runs to be scored in his meek seventh over. The necessary run rate increased to 13.66 as a result.

In addition to taking the prized wicket of Zazai, caught by Garton at sweeper cover for 35, Pretorius also bowled a tight eighth over. Joe Clarke was caught behind by Charles for nine on the final ball to end that over. The match was tipped in Samp Army's favour by Pretorius' eighth over, in which he conceded only eight runs and claimed two wickets.

Karim Janat's first delivery of the last over was hit for a boundary by Cutting, but thereafter he gave only singles off the second, third and fifth delivery, giving away a total of just seven runs. Samp Army thus pulled off a debut win restricting Bangla Tigers to 85 for 3 in 10 overs.