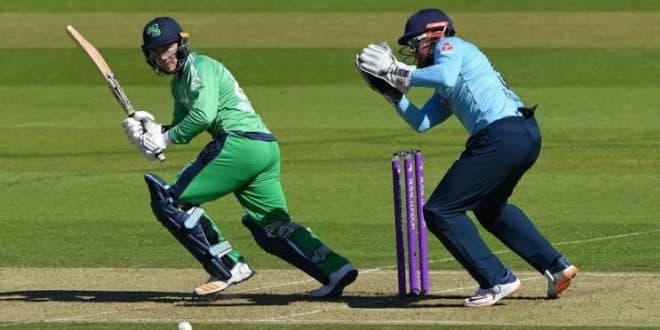 Ireland skipper Andrew Balbirnie was lavish in his praise for debutant Curtis Campher, who shone with a half-century on his debut in Ireland’s loss to England at Southampton on Thursday.

Campher made an unbeaten 118-ball 59 after his team were struggling post David Willey’s impressive spell.

“It was very impressive,” Balbirnie said. “For a guy to come in, he’s not even played international cricket, to play that sort of knock. Albeit it was sort of an old-school knock but it was exactly what we needed. He came in and adapted to conditions which, as top five batsmen, we were unable to do. It’s the best debut for Ireland I’ve seen in the last couple of years and it’s a huge positive.”

“We were disappointed with the way we started our innings certainly,” he said. “Gareth [Delany] started quite well by myself and Stirling didn’t quite assess the wicket as well as we should have. It was disappointing from our end. Being 20 for 5 against World Cup champions; to come back from there was a huge ask. We did well to get to 170 in the end but certainly, with that start, we were not going to be competing.

“Willey bowled pretty well but the frustrating thing was that we knew what to expect, where he was going to be effective, but we weren’t able to negate that. There were plans in place but it was disappointing. Whether it was the first game back – bat on ball – it was a frustrating start. The wicket was slowing off but it certainly wasn’t a wicket where we should be 20-odd for 5. If we are going to compete against a team like England, 170 was never going to be enough.

“We knew if we bowl well we could get a sniff. This England like to play their shots and they can be devastating on their day, but we knew if we bowl our line and lengths, it’s possible to stay in the game. To be able to get them 70-odd for 4 (78 for 4), certainly, we were in the game for a brief period, it give us a bit of optimism for the Saturday game.”

The two sides play again in the second ODI on Saturday.