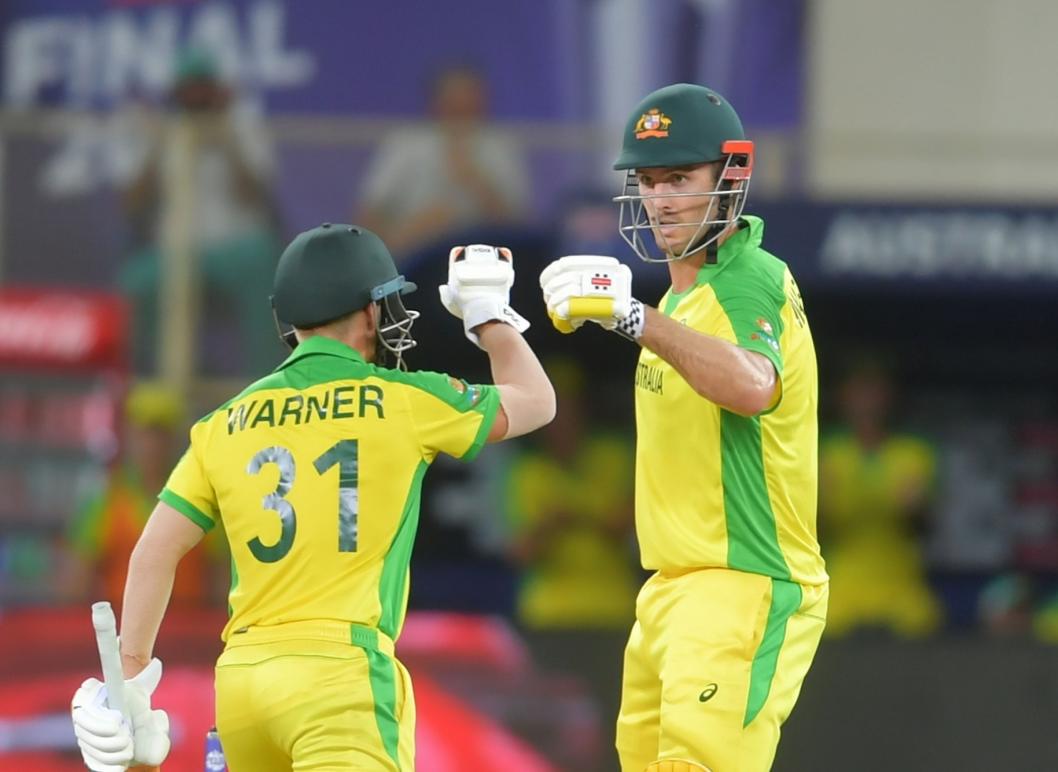 Australia Men won the ICC T20 World Cup for the first time in their history. At Dubai, in the final of the 2021 edition on Sunday night, they chased 173 against New Zealand with eight wickets and seven balls to spare. David Warner (53 in 38 balls) began the onslaught, adding 92 for the second wicket with Mitchell Marsh (77* in 50) in just 59 balls. And once Warner fell, Marsh and Glenn Maxwell (28* in 18) added an unbroken 66, in just 39 balls.

The margin of victory, if anything, flattered New Zealand. Trent Boult (4-0-18-2) got Aaron Finch in the third over, but that was as long as their joy extended. They were never in the match once Warner and Marsh got together. Marsh, coming at one-drop, lofted the first ball he faced, from Adam Milne, for six over square leg, and followed it with consecutive fours.

Unlike New Zealand, who had slogged from one end – that too belatedly – Australia went into top gear from both ends inside the Powerplay.

They then went after Mitchell Santner and Ish Sodhi, who had bowled so well in the middle overs throughout the tournament. Neither spinner got their full quota, and between them, they conceded 63 from six overs.

A reluctant Kane Williamson was forced to summon Jimmy Neesham, his sixth bowler, in the 11th over: Marsh hit Neesham’s first ball over fine leg, and Warner the fourth over mid wicket, both for sixes.

Running out of options, Williamson recalled Boult, who immediately bowled Warner. Australia needed 66 in 46 balls, but as after Finch’s dismissal, Marsh and Maxwell continued to slog, timed almost everything, and continued to find the boundary with ridiculous ease.

Boult had a chance when Marsh hit the last ball of his spell back at him. He grassed the chance, but it would have been too late anyway. Australia needed just 14 off the last three overs. Maxwell finished things off with a trademark reverse sweep to the third-man fence.

Given how both semi-finals had panned out, Finch had no hesitation when he opted to bowl after winning the toss in front of a stadium was barely half full. There was little lateral movement, and Martin Guptill got New Zealand going by slamming the second ball, by Mitchell Starc, to the point boundary.

At the other end, Josh Hazlewood started off just short of a good length, cramping Guptill for room. Australia stuck to their tried-and-tested plan of using Maxwell in the third over, and Daryl Mitchell lofted Maxwell’s first ball over the bowler’s head for six. New Zealand reached 23/0 after three overs.

Then Hazlewood struck with a slower ball that moved away off the pitch and took Mitchell’s edge on its way to Matthew Wade. As Pat Cummins came on and Hazlewood continued, New Zealand slowed down. Sensing an opportunity, Finch sneaked in a second over from Maxwell.

New Zealand, 28/0 after 3.4 overs, crawled to 40/0 after eight. As Marsh came on – for the third over by Australia’s ‘fifth bowler’ – Kane Williamson opened up, with two well-timed, well-placed fours, through extra cover and mid wicket. But Adam Zampa pulled things back, and New Zealand reached 57/1 after 10 overs.

Williamson finally exploded against Starc in the 11th over. He should have been caught off the fourth ball – a full toss that he hit straight to Hazlewood at deep fine leg. But the ball went through Hazlewood’s hands, bounced, and crossed the ropes. Thus reprieved, Williamson banished the next two balls to the boundary, straight and past mid wicket.

As Williamson got going, Guptill’s (28 in 35 balls) inability to find the boundary became evident. He finally holed out to deep mid wicket to give Zampa his 13th wicket of the tournament.

The new batter’s arrival perhaps influenced Finch to recall Maxwell. Williamson responded with two sixes, the second of which got him to his fifty – off 32 balls, a breezy finish after scoring only 7 off the first 13 balls he faced.

Glenn Phillips joined in the fun, lofting Zampa for a straight six and chipping him over cover for four. At the other end, Williamson cut loose at the sight of Starc (4-0-60-0), slashing at the first two balls, and both flew off the edge for four. Williamson hoicked the next ball into the stands over backward square leg. Two more fours took the total from the over to 22.

Cummins (4-0-27-0) restored some sanity with an over full of fast balls of varying length, but it was the next over, from Hazlewood (4-0-16-3), that turned the match on its head. He had Phillips (18 in 17 balls) caught at deep mid wicket off a knuckle ball, and Williamson at long off with a leg cutter.

Williamson fell for 85 off 48 balls; he hit 10 fours and three sixes, and needed a run to go past Marlon Samuels’s 85 not out from five years ago – the highest score in a T20 World Cup final.

Neesham and Tim Seifert, who replaced the injured Devon Conway, threw their bat around as New Zealand finished on 172/4.