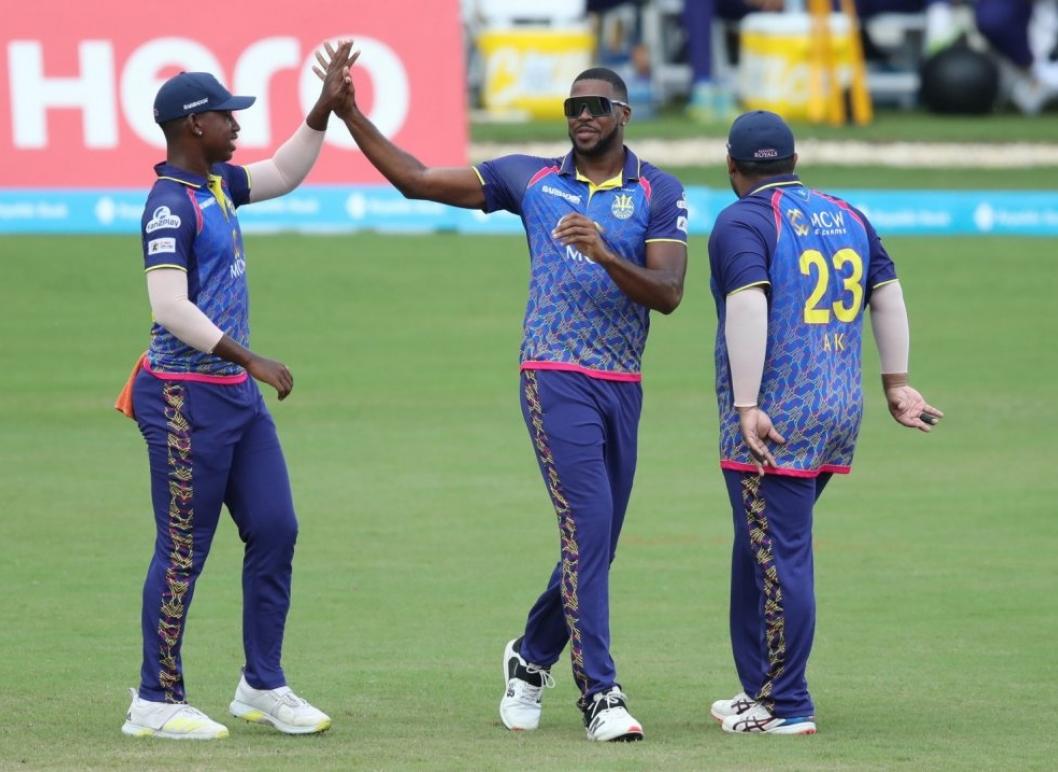 With a 26-run victory over the Guyana Amazon Warriors in the 2022 Hero Caribbean Premier League (CPL), the Barbados Royals secured their place in the playoffs. There were only 16 overs left in the game.

St. Lucia Kings defeated Trinbago Knight Riders by one run in the other game to increase their hopes of making the final four for the play-offs.

Barbados currently leads the group with 14 points after eight games; St. Lucia and Jamaica Tallawahs are tied for second with 8 points each, though St. Lucia has a higher Net Run Rate (NRR); Trinbago Knight Riders are in fourth place with 7 points; and St. Kitts and Nevis Patriots are in fifth place with 6 points. Amazon Warriors of Guyana are in last place with three points.

The Amazon Warriors won the toss and chose to field first, which turned out to be the right move. The Amazon Warriors made it difficult for the Royals to navigate the terrain by regularly taking wickets, and it was only a late-order comeback from Jason Holder and Mujeeb Ur Rahman that made sure the Royals finished with a respectable score of 107/6.

That total, though, proved to be more than enough as the Royals strolled to victory because to their outstanding and tight bowling attack, led by Mujeeb and Rahkeem Cornwall.

The Guyana Amazon Warriors' spinners exerted themselves in the match, taking all six wickets that fell in the Barbados Royals innings on a low and slow track. After the rain delay reduced the Royals to 62/5, Imran Tahir immediately removed David Miller, but Jason Holder and Mujeeb Ur Rahman put together a 39-run partnership off 16 balls to give the Royals a total to defend.

The Amazon Warriors initially appeared to be in a better position, but after four spellbinding overs, Mujeeb ur Rahman and Rahkeem Cornwall held the Warriors to 12 runs for the cost of one wicket. Because the Amazon Warriors were unable to get going, the Royals ultimately won the game handily.

In the meantime, Saint Lucia Kings beat the Trinbago Knight Riders by a thrilling one-run margin to make it three straight victories in the CPL.

The Knight Riders won the toss and chose to bat first, but that move appeared to go awry when Johnson Charles' fifty-first-inning half-century helped the Kings get off to a quick start.

The Knight Riders were given a very challenging 148 to win, despite the fact that they had the Kings pinned back in the middle overs thanks to a devastating 33 off 14 balls from David Wiese.

The highest scorer in the competition, Charles, opened the PowerPlay for the Kings with another barnstorming fifty. He added 59 runs to his partnership with Niroshan Dickwella before Ravi Rampaul continued his impressive form by dismissing the latter.

Rampaul taking away the set Charles caused a squeeze on the Kings scoreboard as 82/3 became 117/5 very fast. To help the Kings record a difficult 147, David Wiese was able to play a superb counter-attacking innings at the very end.

When the Knight Riders lost three early wickets inside the PowerPlay, including Nicholas Pooran for a duck, their task became more challenging. They never really bounced back from that and left themselves with too much room to make up in the closing stages, which led to the close loss.

Leonardo Julien, Colin Munro, and Nicholas Pooran were lost by the Knight Riders to Roston Chase during the powerplay.

In spite of a last-ditch effort by Andre Russell in the game's last overs, it was too little, too late for the middle and lower orders, who were left with too much to accomplish.