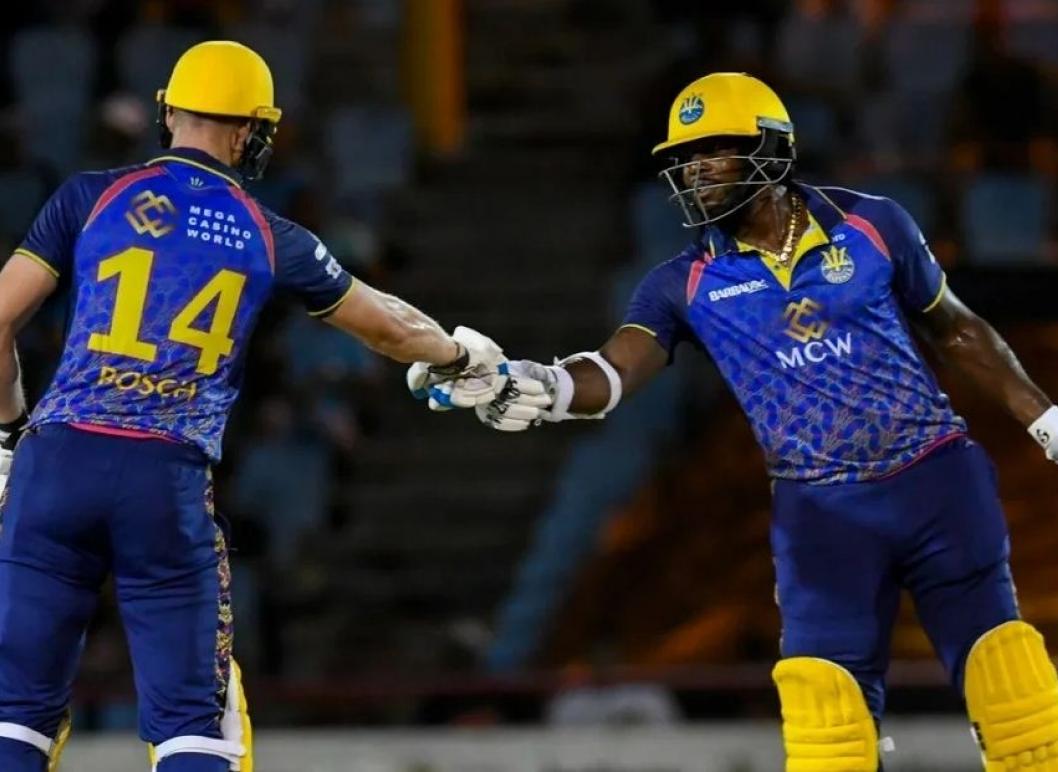 After winning the toss, the Royals decided to field, and it paid off when they had the St. Lucia Kings struggling at 90 for 5. With a 79-run sixth wicket stand between Tim David and David Wiese in 43 balls, they avoided a complete collapse. They managed to achieve a decent total of 169 for six thanks to that.

While pursuing it, the Barbados Royals never appeared to be having any difficulties. Corbin Bosch, who entered the crease after opener Quinton de Kock was dismissed early, led the chase with an outstanding 81 in 50 deliveries with 10 fours and one six. Kyle Mayers and Corbin Bosch scored 84 runs off of just 48 balls to give their team a commanding lead.

Following Bosch's departure, David Miller and Holder continued the pursuit. With nine balls and six wickets remaining, they completed the mark thanks in large part to Miller (29 not out in 18 deliveries), who contributed well.

The St. Kitts and Nevis Patriots defeated the Guyana Amazon Warriors by four wickets to earn their first victory of the year.

The Guyana Amazon Warriors won the toss and opted to bat. In the first 10 overs, they scored 66 runs, but captain Shimron Hetmyer smashed a superb 46 off just 21 balls to help his team to 162/6 at the end of the innings. Chandrapaul Hemraj had before scored 43 points in 38 balls.

After the second wicket stand of 47 runs between Andre Fletcher (41) and Dewald Bravis, the St. Kitts and Nevis Patriots were never able to settle (13). Over the course of their chase, they frequently lost wickets.

The Patriots appeared to be in trouble when Dwayne Bravo and Darren Bravo both left in the 16th quarter.

However, Dwaine Pretorius' impressive power-hitting display late in the innings—27 not out in 12 balls with three sixes—tipped the balance. In the last overs, Duan Jansen (23 not out) and Pretorius worked together with a 55-run combination to lead the team to an incredible victory.

With two balls left, it gave the Patriots their first victory of the CPL season.