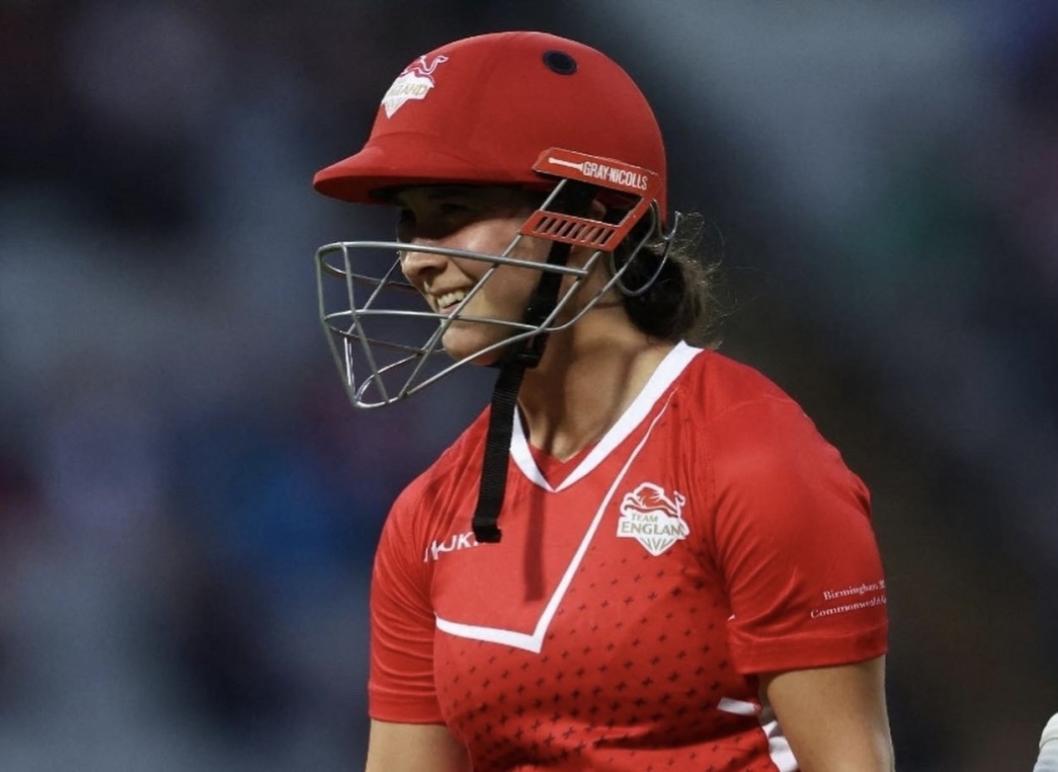 England defeated South Africa by 26 runs to seal their semifinal status from Group B for the 2022 Commonwealth Games at Edgbaston, propelled by a first-ever T20I half-century from teenager Alice Capsey.

England scored 167/5 in their 20 overs thanks to Alice's 50 off 37 deliveries, which included eight boundaries and one six. Lower-order contributions came from veteran bowler Katherine Brunt (38 not out) and wicketkeeper Amy Jones (36 not out).

A 64-run partnership between Anneke Bosch (32) and Tazmin Brits (38) and a 33-ball 41 not out from Laura Wolvaardt were both part of South Africa's chase. However, the bowling assault of England only managed to hold South Africa to 141/4 in their 20 overs, therefore it was insufficient.

Shabnim Ismail, a fierce bowler, gave South Africa's decision to field first an early advantage when she clean bowled Sophia Dunkley (1) with her first ball of the day.

Despite losing an early batter, England maintained their aggressive stance at the crease through Danni Wyatt and Alice, who combined for 33 runs for the second wicket before Shqbnim returned to the fray and claimed Danni's life by having her caught behind for 27 with the first delivery of her second spell.

While stand-in captain Nat Sciver (12) and Shabnim's two wickets did well to contain the English batsmen, 17-year-old Alice displayed her developing potential as she advanced to England's first-ever T20I fifty before both hitters were struck out by Anneke (1/27) and Nonkululeko Mlaba (1/22).

The home team was at 94/5 after 13 overs and in danger of being bowled out for a low total when South Africa quickly ran out Maia Bouchier (1) after getting two crucial hitters back in the dugout.

From there, England was expertly batted over the finish line by Jones and Brunt.

While Jones finished unbeaten on 36 off 23 balls as England did well to post 167/5, bowling all-rounder Brunt played the role of the protagonist with an unbeaten 38 off 23 balls. Together, the pair added 73 runs.

In response, South Africa got off to a strong start with their innings. Anneke and Tazmin saw their team safely through the powerplay, finishing the first six overs on 39/0.

After the opening pair had taken their positions at the crease, Anneke assumed the duty of raising the stakes to aid in the duo's fifty-year stand before Sophie Ecclestone (1-21) made the crucial breakthrough to remove her.

While Tazmin and Laura made every attempt to maintain the requisite run pace, England was able to dismiss the former for a nearly run-a-ball 38 that featured five fours.

Chloe Tryon (11), an explosive all-rounder, joined Laura after that. In an effort to score fast in response to the pressure of the scoreboard and England's disciplined bowling, Tryon and Mignon du Preez (1) were both caught in the deep.

South Africa's skipper Sune Luus (nine not out) and Laura were able to see out the last overs; Sune Luus finished unbeaten on 41 off 33 balls (three fours) as England sealed the victory and advanced to the semifinal with one game remaining.

On Thursday, South Africa will face Sri Lanka in their next game at the Commonwealth Games.