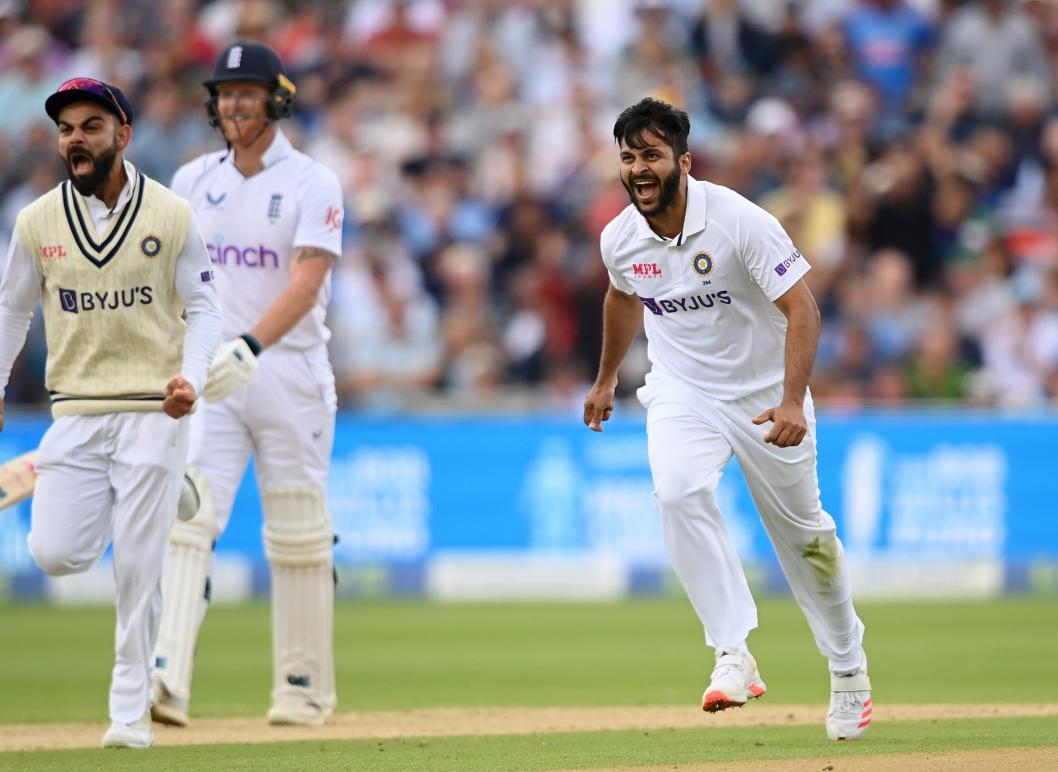 India increased their advantage over England in the fifth Test match that was postponed at Edgbaston, gaining a commanding 132 run lead before increasing it to 169 at tea.

India lost Shubman Gill cheaply after Mohammed Siraj took four wickets and Jasprit Bumrah took three to bowl out England for 284 in 61.3 overs, with Jonny Bairstow scoring a brash 106. However, a 33-run partnership between Cheteshwar Pujara (17 not out) and Hanuma Vihari (10 not out) propelled India to 37/1 in 13 overs.

Early on, James Anderson squared Gill up with a ball that was angled in from a fair length and moved away late, the extra bounce sending the shoulder edge to second slip. The balls were being sent back towards Pujara pretty quickly by Stuart Broad and later Matthew Poots, while Anderson engaged in some nipping and even touched Vihari's thigh pad.

Vihari shown a lot of control, while Pujara was leaving a lot of balls in the outside off-stump corridor. When England occasionally bowled a bad delivery, Pujara scored twice over the off-side, and Vihari hit an Anderson short ball through backward point for four runs to keep India in control of the game.

Earlier, on his way to his third Test century in as many games, Bairstow (26) and Ben Stokes (25) shared partnerships of 66 and 92, respectively. But it wasn't enough to prevent giving India a helpful lead. After lunch, he picked up where he left off, clipping Shardul Thakur for a boundary in the space between deep midwicket and deep midon.

To keep England's run-flow going from the other end, Billings hit Bumrah for boundaries through fine-leg and third-man. Bairstow hit Thakur square through the off-side with a crunching back foot punch to complete his century. Ravindra Jadeja slipped on the boundary, allowing the ball to cross the rope for a boundary. Bairstow and Billings were able to rotate the strike to keep the scoreboard moving while Thakur struggled to maintain his line and length; the former survived a lbw appeal from Bumrah via DRS.

In four overs of constant pressure, Bumrah and Jadeja combined to give up only six runs. Mohammed Shami, who gave India the breakthrough with the first ball of his session to terminate Bairstow's effort, benefited from that tension.

Bairstow couldn't help but drive hard away from his body on a full and outside the off-stump delivery from Shami, giving Kohli a healthy edge at first slip. Kohli then shot a flying kiss in the direction of the Barmy Army supporters.

India then repeatedly hit Broad with short pitches, and in an effort to escape, Broad skied one off Siraj high into the air, making a routine catch for wicketkeeper Rishabh Pant. When Billings played-on while attempting to pass the ball through the third man, leaving for 36, Siraj claimed his third victim.

When Potts nicked to second slip for a low catch, he next put an end to England's innings. It took replays a while to determine whether the ball actually hit the ground or whether Shreyas Iyer's finger was on the ground prior to the catch.