FEATURE: Cricket in the lap of Mount Everest 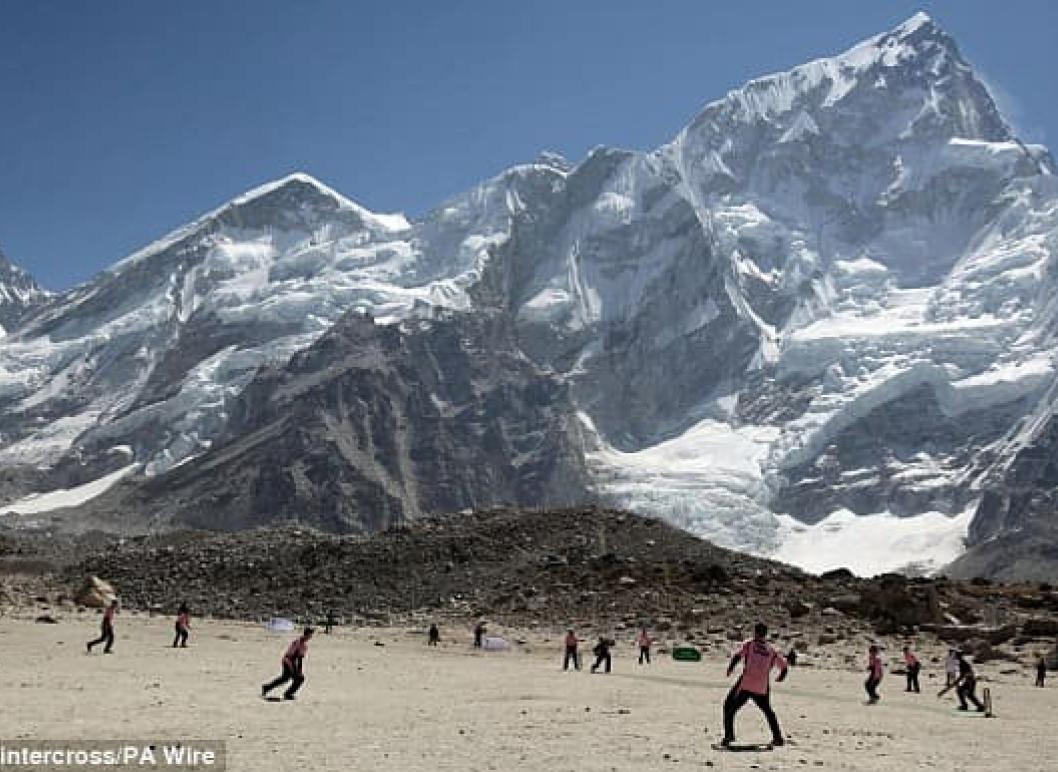 With the world currently battling the deadly coronavirus and sporting activities around the globe have taken a temporary break, CricketNews.com has decided to utilise this spare time to take a look beyond the traditional boundaries of the cricketing fraternity. In today’s piece we will get to know about a full-fledged 11-a-side cricket match, that took place on the lap of the Mount Everest…

In 2009, a British expedition group had set an unique record by playing a full-fledged 11-a-side cricket match at the Everest Base Camp. An idea, which was first discussed among some adventure enthusiasts over a pint of beer in a bar somewhere in the United Kingdom, eventually ended up being implemented at an altitude of 5,165 metres (16,945 ft) above sea level.

A contingent of 50; which included 22 players, reserves, medics and groundsmen, many of whom had never met until a year earlier; took part in an exhausting nine days of trekking to reach the playing arena at the Gorak Shep plateau, which is situated just above the Everest Base camp. Richard Kirtley, an experienced mountaineer was leading the entire group.

Local Sherpas helped to prepare the field of play by moving stones, pebbles, and rocks — sometimes by pickaxes, sometimes by hand, as described in book, ‘Cricket on Everest’ written by Alan Curr.

Meanwhile, it took quite an effort to get things ready for the 20-over per side match. The group also face difficulties in securing the necessary permissions from the local authorities as at that point there was hardly anyone who found merit in the idea of playing a T20 match over there. Though, in 2007, another expedition group, including the former Essex all-rounder Graham Napier and ex-Nottinghamshire batsman Mark Wagh played a six-a-side game at that spot. But that was an eight-over per side fixture.

The location of the ‘field of play’ was more than twice the altitude professional footballers are allowed to play at and at that height the body absorbs only two-thirds of the oxygen it does at sea level, which means the resting heartbeat is about a third faster.

However, the group was adamant and they got the backing of London-based charities like Lord’s Taverners as well as The Himalayan Trust. The adventure also captured the imagination of people around the globe, making front page news in several countries; being followed by millions through daily TV news updates and raising more than GBP 100k for charity.

And eventually, the match between Team Hillary and  Team Tenzing was worth all the hard work as in a highly competitive game, the Hillary side beat the Tenzings by 36 runs.

Later, in an interview with the Mirror, Team Tenzing captain Haydn Main described his experience.

“Both Tenzing and Hillary are full of inspirational people and it’s been our sense of team across the whole expedition that has made this record a reality.”

While talking with the same publication, Team Hillary captain Glen Lowis thanked all the people involved with the project for the ‘memorable experience’.

“It has been truly one of the most memorable experiences of my life, I cannot thank all of the people involved enough.”

The teams celebrated their achievement of taking the game to such a height, literally, with a giant bottle of champagne followed by cups of tea.