One could argue that cricket, is pretty much, a batter’s game. Crowds throng the stadiums to watch big sixes and high run-chases, and bowlers are hardly given their credit in the T20I format. Holding their nerve on flat pitches with everything going against them is no easy task, yet a number of bowlers have been able to leave their mark in the format.

Only three bowlers in the history of women’s T20I cricket have been able to pick up more than 100 wickets, which is a testimony to their skills and consistency. Three bowlers currently have 90-100 T20I wickets, while six have wickets between 80-90. 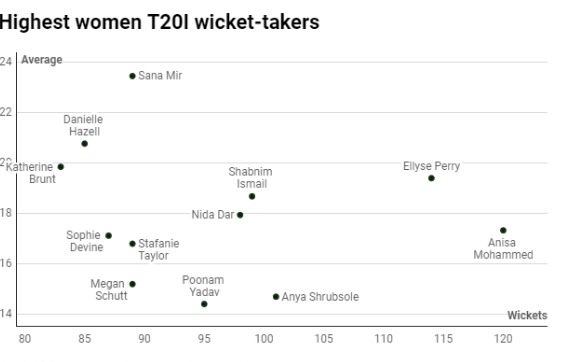 The West Indian tops the list with the most number of wickets picked in T20 Internationals – 120 in 112 games for her country. The off-break bowler has picked up 12 three-wicket+ hauls in 107 innings along with three five-wicket hauls, which is the highest number of five-wicket hauls in the women’s game. Conceding runs at just 5.56 an over at an average of just over 17, Mohammed has emerged as her side’s go-to bowler in the middle overs.

The all-rounder from Australia is, not surprisingly, second on the list of most wickets taken in T20Is with 114 in 120 matches. Though she is yet to pick a five-wicket haul, she has nine three-wicket plus hauls with best figures of four for 12. In 116 innings that Perry has bowled, she has conceded runs at an economy rate of 5.86 at a strike rate of 19.83 and an average of 19.38. The medium-pacer bags 1.21 wickets in every four overs that she bowls in a T20I innings, which is evidence of her effectiveness.

The English pacer has just over 100 wickets – 101 – after only 75 matches. With 14 three-wicket plus hauls and one five-wicket haul, Shrubsole leads the charge for her side and is a major reason for their continued success over the years. With a stunning average of 14.68 and an economy rate of 5.90, she is undoubtedly the biggest match-winner from England. Moreover, Shrubsole grabs 1.35 wickets in every T20I innings that she bowls – the highest among the top 25 wicket-takers in the format.