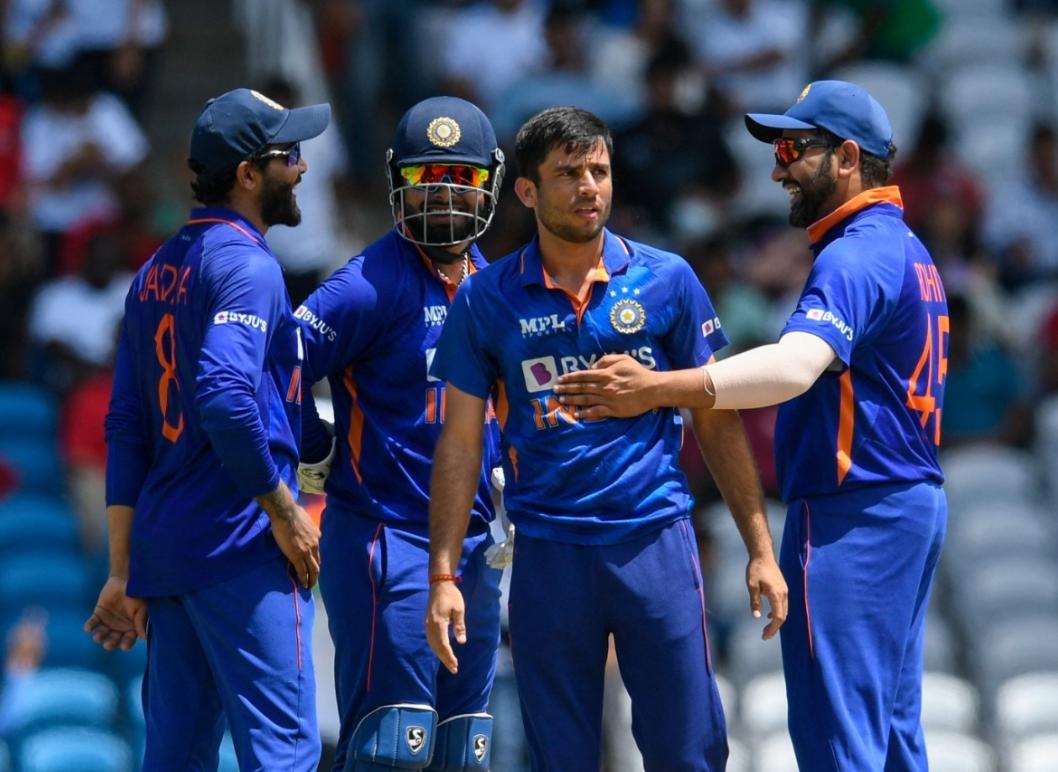 At the Brian Lara Stadium here on Friday, India's skipper Rohit Sharma and veteran Dinesh Karthik each had impressive innings that helped India defeat West Indies by a score of 68 runs to win the first T20I and grab a 1-0 series lead.

India was asked to bat first and after a magnificent half-century by Rohit (64 off 44) and a last flourish by Karthik (41 not out off 19), they reached 190/6 in 20 overs. Suryakumar Yadav (24 off 16) was India's second key batting contributor in addition to Rohit and Karthik.

Kyle Mayers made it plain from the get-go that he was chasing a difficult score by going all out against the Indian pacers. He couldn't hold out for very long, though, as Arshdeep Singh set him up with a brief delivery. The decision to send Jason Holder backfired when Ravindra Jadeja cleaned him up.

The second player to go was Shamarh Brooks, who was bowled by Bhuvneshwar Kumar. As the hosts found themselves at 66/4, Ravichandran Ashwin also bounced back from taking a few boundaries in the form of the significant scalp of Nicholas Pooran.

From there, West Indies faced a difficult assignment, and the Indian spinners made sure that a miraculous chase was not in the cards. Another wicket was taken by Ashwin, and after joining the attack, Ravi Bishnoi bowled brilliantly as well.

West Indies eventually lost by a large margin after being reduced to 122-8 in 20 overs. The three most effective Indian bowlers were Ravichandran Ashwin (2/22), Arshdeep Singh (2/24) and Ravi Bishnoi (2/26).

Earlier, India experimented with a different opening duo when Suryakumar Yadav joined Rohit to open the innings. Before Suryakumar (24 off 16) was caught by Akeal Hosein in the fifth over, the pair built up a quickfire opening partnership of 44 runs off 28 balls. India finished the powerplay at 45/2 as Shreyas Iyer, the following batter, was dismissed for a duck in the sixth over.

Despite losing a few quick wickets, the India skipper was consistently hitting boundaries, including a pull for a six against Joseph, and he assisted India in making solid progress. Pant joined in the fun as well, hitting a few boundaries off Keemo Paul, but he eventually left India at 88/3 after edging the final ball of the tenth over to short third man for 14 off 12.

Despite losing Pant, Rohit maintained his composure and struck two consecutive fours against Joseph to reach fifty in 35 balls. Hardik, however, was dismissed in the same over after ramping a short delivery to third man, where McCoy made a brilliant grab.

India was anticipating a large total with Rohit well established at the crease, but Hetmyer's diving grab on a slower ball over terminated his time there. India was 138/6 after 16 overs when Jadeja's boundary finished the over, but he was out in the following over.

Karthik, India's designated finisher, was then left to complete the task. He demonstrated his worth, and he and R Ashwin (13 not out off 10) helped India reach 190-6 in 20 overs by scoring 21 and 15 runs, respectively, in the 19th and 20th over.