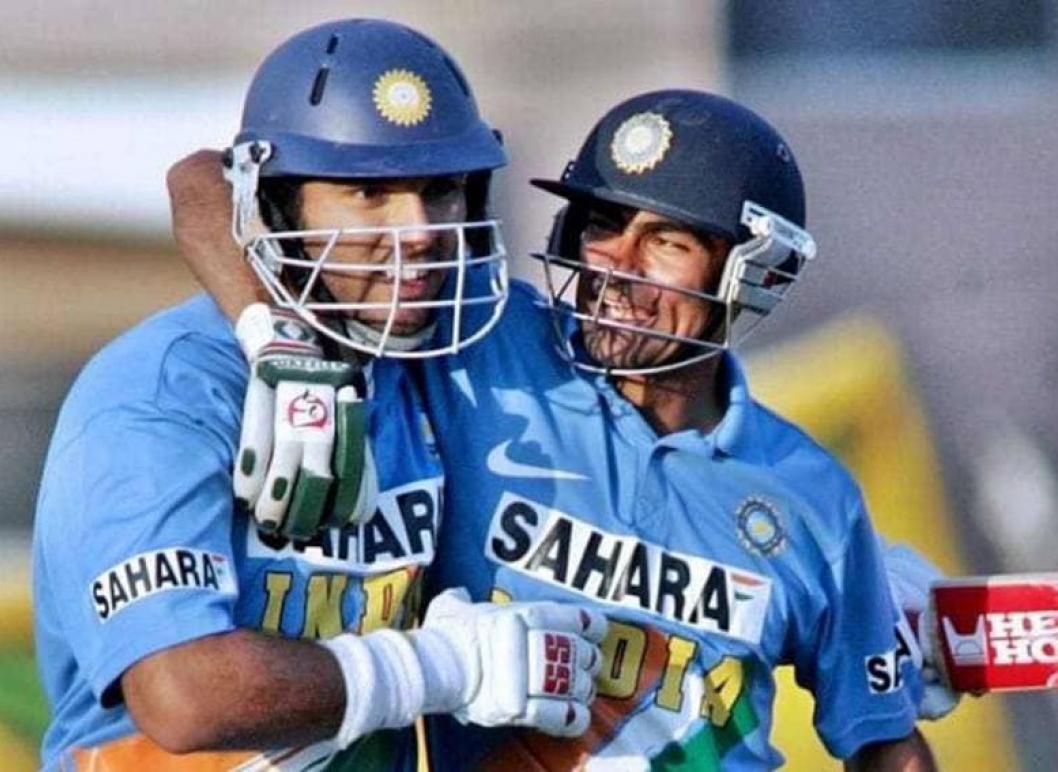 Starting 1988, the youth World Cup has seen 13 completed editions, with India being the most successful team with four titles. Since 2000, India have entered every tournament as a force and emerged as the showstopper.

Shivam Mavi, Kamlesh Nagarkoti, Ishan Porel, Avesh Khan, Kartik Tyagi and Ravi Bishnoi provide a glimmer of hope that the trend will reverse. Still, none of them has played international cricket.

On Saturday, India began their 14th edition of the Under-19 World Cup in the Caribbean Isles with a win against South Africa. As the young guns eye the fifth silverware, let’s look at the Best Indian Senior XI from the past tournaments.

The players have been chosen based on the overall impact they made in senior international cricket.

Sehwag played the 1998 edition in South Africa, where India failed to progress beyond the group stage. The batting chart was dominated by Chris Gayle, who went on to have perhaps an even bigger impact as Sehwag in senior cricket.

For India, a 17-year-old Mohammad Kaif was their best batter. Sehwag struggled, scoring just 76 runs from six innings at 12.7. He was much more effective with ball, getting seven wickets at 11.7, going at 3.4 an over. In fact, as an off-spinner, he overshadowed Harbhajan Singh.

Three and half years later, Sehwag made his Test debut in South Africa, exorcising the woes of 1998 with a century. A makeshift Test opener who went on to redefine the role, he ended his career as one of the greatest openers, who played a significant role in helping India climb to the No. 1 spot in the ICC Test Rankings.

Sehwag is the first Indian to score a Test triple century and holds the highest score by an Indian in Tests. Sehwag, Gayle, Brian Lara, and Don Bradman are the only cricketers who have breached the 300-mark twice in Tests. Sehwag also has a 293.

Partnering Sehwag at the top is his Delhi teammate, Dhawan. In the 2004 edition, Dhawan amassed 505 runs in the tournament at 84.2, striking at 93.5. This is still the record for most runs in a single edition of an Under-19 World Cup.

Dhawan made his national debut in 2010, and emerged as one of India’s most successful white-ball batters. He starred in India’s 2013 Champions Trophy win. In fact, Dhawan has an incredible record in ICC tournaments, where he averages (65.2) – more than Sachin Tendulkar, Sourav Ganguly, Rohit Sharma, Virat Kohli, Rahul Dravid and Sehwag.

Dhawan also had his moments in Test cricket. He started his red-ball journey for India with an exceptional 187 against Australia in 2013, but could not achieve consistency in overseas conditions.

Rohit had a good 2006 Under-19 World Cup campaign, where India ended as the runners-up. While overshadowed by Cheteshwar Pujara, who top-scored in the tournament, Rohit slammed three fifties in six innings, scoring 205 runs at 41.

He was touted as the next big thing for Indian cricket and made his international debut the following year, starring in India’s 2007 T20 World Cup win. In fact, he was the first Indian to score a hundred in T20s.

Despite the apparent talent, it took Rohit time to achieve consistency and become a permanent fixture at the top level. When he did, he emerged as one of the finest in the world. As player, Rohit has won the 2007 T20 World Cup, 2013 Champions Trophy, six IPLs (five as captain) and one Champions League T20 (as captain).

The only cricketer with three (or even two) ODI double tons, Rohit is currently India’s current limited-overs captain and the best opening batter in the world across formats.

Kohli would be the first to make it to the team. In fact, it was the 2008 edition that made him a household name. His inspirational leadership and batting helped India clinch their second Under-19 World Cup trophy.

In a tournament where low scores were a norm and no batter breached the 300-mark, Kohli was the third-highest run-getter with 235 runs at 47, striking at 95. Later that year, he made his India debut. In the years to follow, he emerged as the best all-format batter in the sport.

Kohli was awarded the ICC Men’s Player of the Decade (2011-2020), and is also one of the most successful Indian captains, who has led India to unparalleled glories in Test cricket.

Kohli has won two T20 World Cup Player of the Tournament awards and has won the 2011 World Cup and 2013 Champions Trophy for India. Considered one of the game’s greats, Kohli is India’s third-highest run-getter in international cricket after Tendulkar and Dravid. The country’s most successful Test captain will lead this illustrious XI.

Under Kohli, India reached unparalleled heights in Test cricket, making India the consistent No. 1 side in the format for five consecutive years. Unfortunately, the Under-19 World Cup win in 2008 remains his only ICC tournament win as a captain.

Rahul was India’s wicketkeeper-batter in the 2010 edition. Back then, he was a defensive batter who did not do too well in the tournament, scoring 143 runs from six matches at 28.6. Even as teenagers, he opened with his close friend Mayank Agarwal, who did not succeed either. India failed to progress beyond quarter-final.

Almost five years later, Rahul made his Test debut for India and scored a hundred in his second Test match. Initially seen as a better suited for Test cricket, Rahul has evolved into a valuable all-format batter, a vital cog for the Indian side across formats.

Throughout the 1990s, India remained a competent unit in ODIs. Then arrived Yuvraj, the bridge that helped India cover the distance between being competent and winning trophies. He perhaps developed that habit at the Under-19 level when he powered India to their first World Cup win at this level in 2000.

Yuvraj belted 203 runs in the tournament at 34, with a strike rate of 103.6. Remember, it was still the 20th century, a tournament played with the red ball, which makes that strike rate phenomenal. No other batter with over 105 runs crossed the barrier of 100. He also picked up 12 wickets at 11.5 and an economy rate of 3.4. Add to that his electric fielding that became a hallmark of the Indian side in the years to come.

In years to come, he won the Champions Trophy (joint winners) in 2002 and played critical roles in India’s World Cup wins in 2007 (T20I) and 2011 (ODI). The Player of the Tournament in 2011, Yuvraj remains the only batter to have smacked six sixes in an over off a fast bowler in international cricket. Though he found limited success with the red ball, he played a role in India’s march to the No.1 rank in Test cricket.

Kaif, Yuvraj's captain from the 2000 edition, narrowly misses out a middle-order berth. So does Suresh Raina, one of India's finest white-ball batters.

Pant had a very good Under-19 World Cup in 2016, where he opened for India. He recorded the fastest fifty of the tournament history in that edition, and also scored a century. He scored 267 runs at 44.5, striking at over 104. India’s excellent run in the tournament ended in the final against West Indies.

Some spellbinding shows in domestic cricket saw Pant get fast-tracked into the national setup. Filling in the boots of M.S. Dhoni, Pant has been burdened with expectations and criticism for too little. However, his Test career has witnessed a meteoric rise.

In a short career, he has managed Test hundreds in England, Australia and South Africa. No overseas wicketkeeper-batter has managed to achieve this feat in all three nations.

In a 28-Test-old career, Pant has already played some of the finest Test innings in Indian history. His 89 not out in Brisbane helped India in breaching Australia’s Gabba fort after 33 years.

Jadeja played the 2006 and 2008 editions. While India lost the final in 2006, he played a handy role in 2008 when India ended their campaign as the champions.

One of the finest all-rounders in the game, Jadeja did little with bat in the youth World Cups but picked 14 wickets from the two editions at 13.6, going at 3.1 an over.

In years to follow, he established himself as an asset across formats, playing a massive role in India’s Champions Trophy win in 2013 and multiple Test Maces since 2017.

In 2020, CricViz analysis rated Jadeja as India’s most valuable Test cricketer of the 21st century and the second-most valuable player of the century behind Muttiah Muralitharan.

A match-winner in every discipline, Jadeja is arguably India’s finest all-round fielder.

Unadkat played only four matches in the 2010 edition, but remained consistent, he claiming seven wickets at 15.4, going at under four an over. Later that year, he made his Test debut for India in South Africa as a 19-year-old. He failed to get a wicket and never played another Test.

Over the next few years, he made sporadic appearances in limited-overs cricket and made a good impact. His exploits in domestic cricket saw him earn the handsomest of cheques in the IPL auctions.

An astute leader for Saurashtra, he remains one of India’s finest red-ball bowlers in domestic cricket, who has not been lucky with national opportunities. With India possessing an excellent pace attack and pandemic halting consecutive Ranji Trophy seasons, Unadkat’s national comeback looks bleak at the moment.

In the 1998 edition, a 17-year-old Harbhajan was India’s second-highest wicket-taker in the tournament, behind Amit Bhandari. He picked eight wickets at 21.1, going at 3.44 an over. Less than two months after the tournament, he made his Test debut.

In 2000/01, in the absence of Anil Kumble, Harbhajan left an everlasting impression in Indian cricket when he bagged 32 wickets from three Tests, helping India beat Steve Waugh’s Australia. In the same series, Harbhajan, then 20, became the first Indian to claim a Test hat-trick.

Over the years, Harbhajan remained one of India’s mainstays. Like Sehwag and Yuvraj, he played his part in helping India win the World Cups in 2007 (T20) and 2011 (ODI); and helping India climb to the No. 1 spot in Test cricket for the first time, in 2009.

R.P. Singh impressed in the 2004 edition with eight wickets under 25. In a career spanning six years, he played only 14 Tests, 58 ODIs and 10 T20Is. Despite that, he delivered several impactful performances as, on this day, he could be the best swing bowler in the display.

Singh got a five-for at Lord’s, his first Test in England. A few months later, he was one of India’s stars in their T20 World Cup win and then played a critical role in the memorable Test victory at Perth.