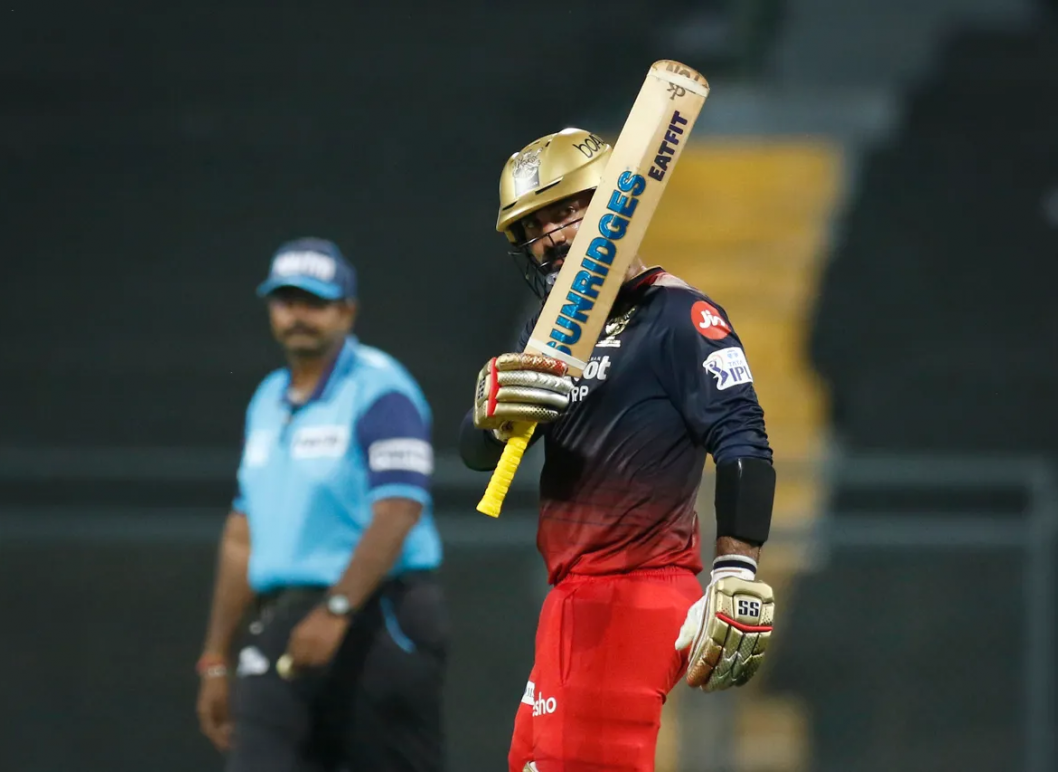 Dinesh Karthik continued with his outstanding form in IPL 2022, this time again Delhi Capitals at the Wankhede Stadium, Mumbai, in Match 27. He was at the forefront in setting a big target for Delhi with a scintillating 34-ball unbeaten 66. Karthik's tournament numbers stand at 197 runs at a strike rate of 210, and he has been dismissed only once in six innings.

Earlier, Rishabh Pant won the toss and decided to chase like all the other instances in this IPL. Delhi brought in Mitchell Marsh for Sarfaraz Khan, while Bangalore welcomed back Harshal Patel for Akash Deep. Harshal returned from a break he availed due to the unfortunate demise of his sister.

Bangalore lost early wickets. Anuj Rawat fell for a duck, Faf du Plessis for eight, and Virat Kohli was run out for 12, leaving them reeling at 40/3. By then, however, Glenn Maxwell had already raced to 19 off 12 balls. He was on 24 from 19 balls when Kuldeep Yadav, hero of the last match, was introduced. Maxwell hit two fours and two sixes to take 23 off Kuldeep’s first over.

He reached his fifty off just 30 balls, but Bangalore lost Suyash Prabhudessai in between. Kuldeep then got his revenge as he came on from the other end to have Maxwell caught at long on for 55. At that stage Bangalore were 92/5 in 11.2 overs. From there, 160 seemed reasonable.

At this point, Karthik lit up Wankhede with some breathtaking shots, including two sixes and four fours in an over from Mustafizur Rahman. He found support from Shahbaz Ahmed. The pair added an unbroken 97 in 52 balls. Karthik finished on 66 from 34 balls and Shahbaz on 32 from 21.

Prithvi Shaw and David Warner then raced to their third consecutive fifty-run opening partnership, Warner being the more aggressive of the two. The first four overs featured a six each, and three of these sixes were hit by Warner, who scored 32 runs of the first 50 runs. Mohammed Siraj dismissed Shaw for 16, but Warner continued to play his shots and reached his fifty off just 29 balls.

At the other end, Marsh struggled in his first match of the season, failing to time the ball or rotate strike on a pitch that slowed down. Wanindu Hasaranga finally claimed Warner when the latter tried to play a switch hit, for a 38-ball 66. Hasaranga also got Marsh, for a 24-ball 14.

Delhi needed 78 off the last six overs, but they still had Rishabh Pant, who was by now playing shots all around the ground. However, Josh Hazlewood picked up the wickets of Rovman Powell and Lalit Yadav in the 13th over to put the pressure on Pant.

Pant tried his best but finally fell to Siraj, thanks to a brilliant catch by Kohli. Once Pant fell, there was not much hope left for Delhi. Despite cameos from Shardul Thakur, Axar Patel, and Kuldeep, they lost by 16 runs.