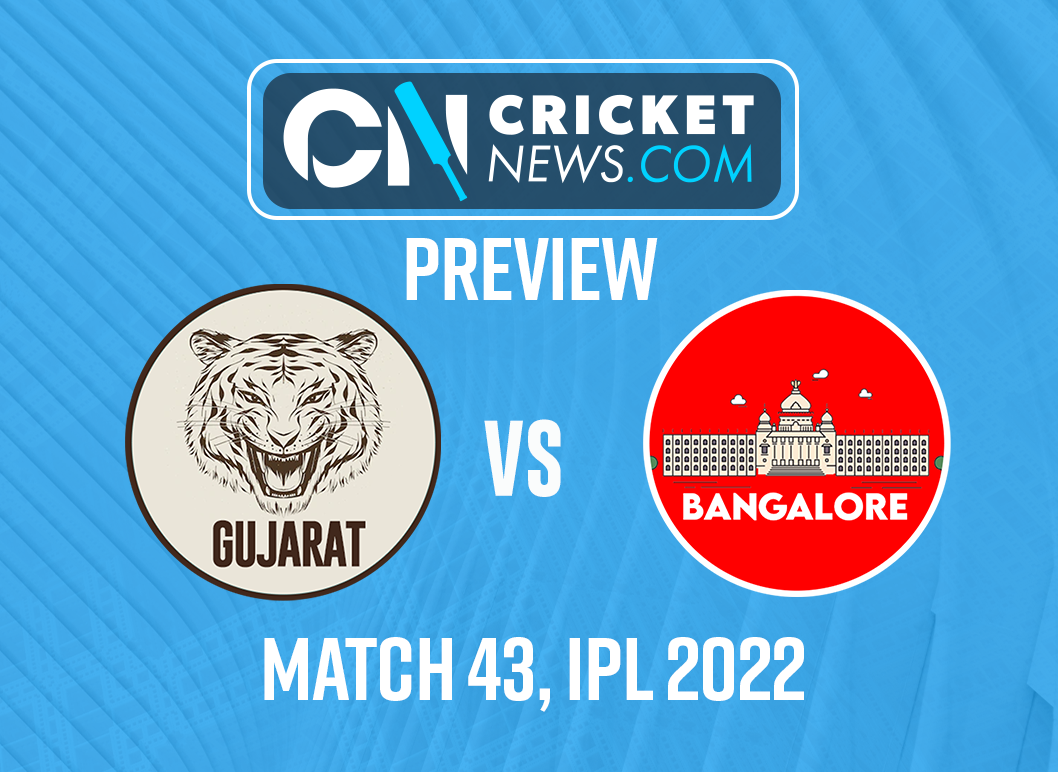 In Match 43 of Indian Premier League (IPL) 2022, table toppers Gujarat Titans (GT) will lock horns with the inconsistent Royal Challengers Bangalore (RCB), who are currently at fifth place. The match, the afternoon fixture of Saturday's double-header, will be played the Brabourne Stadium in Mumbai.

The Brabourne wicket has looked "tired" of late. In fact, in their last match here, RCB were bowled out for 68 against Sunrisers Hyderabad. The last two afternoon matches at the venue have been won by teams batting first. Keeping that in mind, both captains are likely to opt to bat.

Top-order batting has been RCB's biggest nemesis this season. Virat Kohli has looked completely out of sorts. Captain Faf du Plessis has only two significant knocks under his belt this season – 88 against Punjab Kings and 96 against Lucknow Super Giants. And Glenn Maxwell to has a string of low scores – 8*, 26, 55, 23, 12 and 0. At the same time, Suyash Prabhudessai, Shahbaz Ahmed and Dinesh Karthik have batted with authority to bail out RCB on multiple occasions.

Their bowling has been patchy as well, with the likes of Wanindu Hasaranga and Mohammed Siraj not getting enough wickets. However, Josh Hazlewood and Harshal Patel have bowled well.

Gujarat Titans, on the other hand, have had a sensational run in the inaugural season. Their bowling unit – a formidable pace battery, supported by Rashid Khan – is arguably the best in the season. Despite lacking a big name, their batting has shaped up well. Hardik Pandya has impressed as batter, captain, and – when fit – bowler.

- Shami has the most wickets in the Powerplay overs this season. Considering the vulnerability of the Bangalore top order, back him to make early inroads today.

- With no dew in this afternoon fixture, Hasaranga can be more effective.

- Back power hitters from both teams to enjoy batting at the tiny Brabourne ground.

Live streaming of Match 43 of IPL 2022 between Gujarat Titans (GT) and Royal Challengers Bangalore (MI) will start at 3.30 PM IST on April 30. You can watch the match on the Star Sports Network and Hotstar.