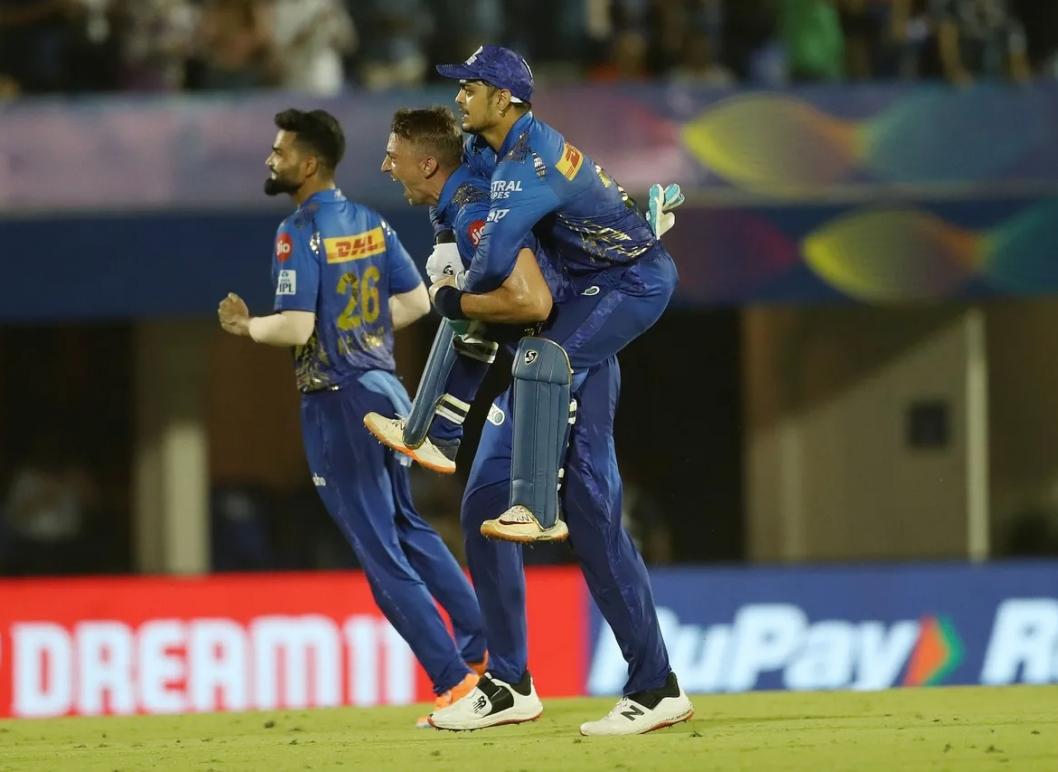 Mumbai Indians won their second match of IPL 2022. They beat table toppers Gujarat Titans by just five runs. After eight consecutive defeats, Mumbai have now won back-to-back matches. Despite that, however, they remain at the bottom of the table, while Gujarat are at the top despite two consecutive defeats.

Rohit Sharma hit two fours and a six in the second over, bowled by Alzarri Joseph, and raced to 32 off just 16 balls. With Ishan Kishan also joining in, Mumbai reached 63 in the Powerplay overs, their best of the season. Rohit finally fell to Rashid Khan while attempting a reverse sweep.

This brought down the run rate to some extent, and the Gujarat bowlers started to put the pressure back on the Mumbai batters. Mumbai lost Suryakumar Yadav and Kishan in consecutive overs, the latter top-scoring with 45. Kieron Pollard failed again, and Mumbai may start thinking about bringing Dewald Brevis in the XI in place of Pollard.

Tim David got hold of the match in that situation. He got support from Tilak Varma, and took charge once Verma was run out. He hit two fours and four sixes to remain unbeaten on 44. Mumbai posted 177/6, which at that stage looked below par. With 2-24, Rashid was the most successful Gujarat bowler.

Gujarat Titans had a brilliant start to their chase thanks to their openers. Wriddhiman Saha took control from the start and kept playing shots. He hit two sixes off Jasprit Bumrah, who was wayward. Thanks to Saha, Gujarat had a very good Powerplay as well. Shubman Gill began watchfully, but once Rashid was introduced, he started to play his shots and raced to his fifty along with Saha.

With the openers adding over 100, it looked like an easy chase for Gujarat. However, Ashwin (2-29) was rewarded for some consistent bowling, removing both openers in the 13th over. It was still a Gujarat match with Hardik Pandya in the middle, but Sai Sudharsan was out hit wicket for 14.

Gujarat required 40 in four overs, but the Mumbai bowlers found the right length and made run-scoring difficult. Gujarat also lost Pandya in the 18th over. Pandya attempted a quick run, but Kishan’s underarm throw found him short of his ground.

With nine to defend in the last over, Daniel Sams conceded just three runs in the first four balls, which included Rahul Tewatia getting run out. Sams kept his cool and bowled two brilliant slow balls outside off. Miller missed both, and Mumbai won by five runs.