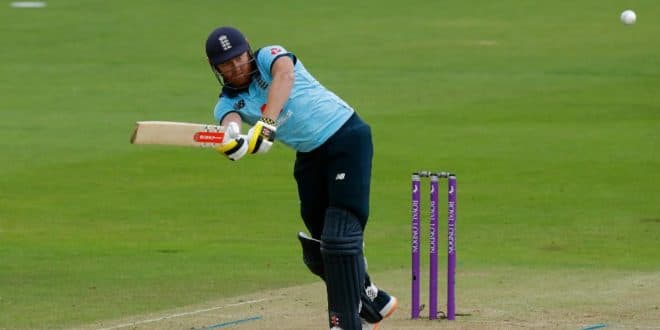 Jonny Bairstow won the Man of the Match award after a scything attack on Ireland that helped England get off to a fiery start and later survive a tricky period as they beat beat Ireland by four wickets.

The 30-year old Bairstow hit a 21-ball half-century, the joint-fastest by an England player in the format. He raced to 82 in 41 balls before Curtis Campher dismissed him but the early onslaught had put England on course for a win.

Bairstow also reached the landmark of 3000 runs in ODI cricket, completing it in 72 games, the fifth fastest in terms of innings.

“I’m really proud of that. It’s been a testing journey at times but to have reached that landmark – and hopefully there’s many more – means a lot now,” Bairstow told Sky Sports.

“We’re striving to keep pushing those boundaries forward to 2023. That’s my next bit – I want to be there in 2023 and really pushing and see if we can retain it.

“I’m enjoying batting at the top of the order and the partnership with Jason (Roy) has gone well. Naturally there’s things I want to work on, that comes with time but at the moment I’m happy with the way I’m striking the ball.

“I’ve had a bit of a lay-off and to get runs in the warm-up game, then back it up in the ODIs is really pleasing.”