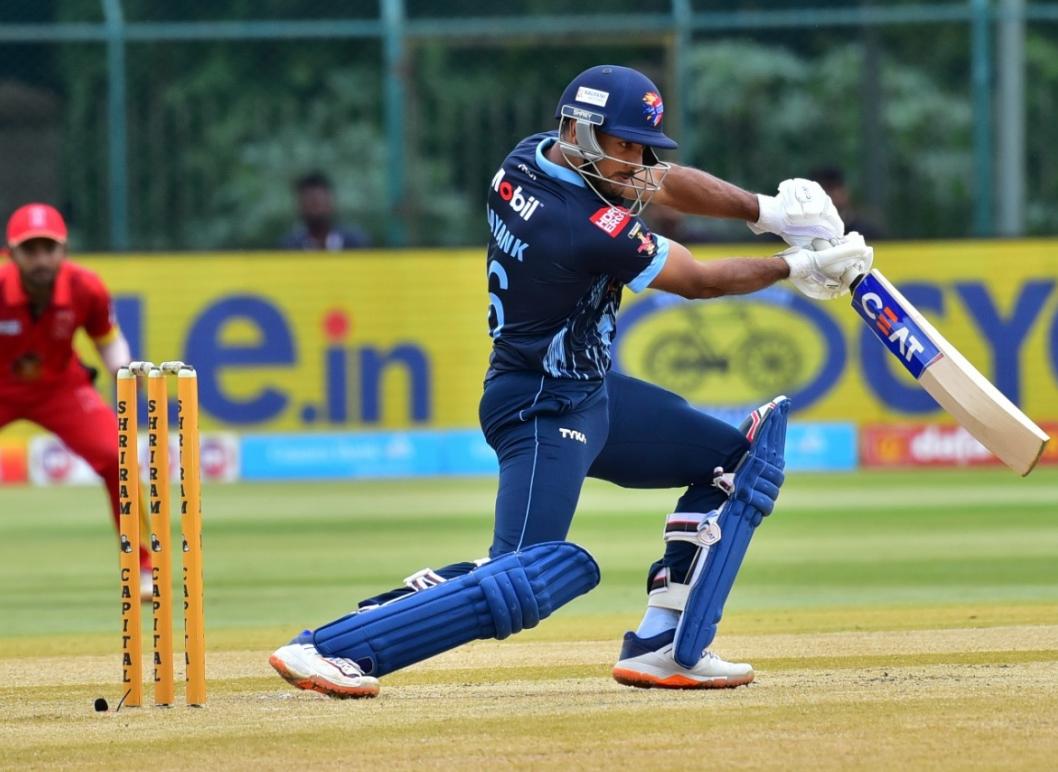 As they batted the opponents out of the game, Mayank and LR Chethan were at their most dangerous, and Rishi Bopanna cranked on the style with the ball, taking 4 wickets.

When given the opportunity to bat first, the Bengaluru Blasters had a strong showing. Captain Mayank Agarwal and LR Chethan both had fantastic powerplay innings, pushing the total to a respectable 70/0 after the first six overs.

Chethan threw all at the Mangalore bowling as the more seasoned Mayank balanced caution and aggression at the opposite end. Bengaluru lost Mayank shortly after the powerplay for 44 off 20 deliveries. The Blasters were unaffected by this, as Chethan reached his fifty quickly and finished on 66 from 39 deliveries after hitting five sixes and four boundaries. The score was 126/2 in the 12th over when Chethan was removed.

The Blasters added another 60 runs in the remaining overs while losing another 7 wickets, but they were unable to capitalise on their early advantage. As the Blasters reached 186/9 in 20 overs, Suraj Ahuja (10), Shivkumar Rakshith (14), Kranthi Kumar (12), and Rishi Bopanna (16*) made the biggest contributions. M Venkatesh, Amit Verma, and Aneeshwar Gautam each claimed two wickets for Mangalore.

Samarth R, the team's captain and opener, was out for one in the second over of the chase for a challenging total, but Macneil Noronha and Nikin Jose steadied the ship with a partnership of 70 runs for the second wicket.

Nikin was making good contact and was on his way to his second consecutive fifty when he was removed for 35 off 33 deliveries, just as his team was picking up speed. Noronha continued to make progress at the opposite end even as Abhinav Manohar left for 11.

Noronha, who exhibited both caution and aggression, reached his half-century in the 14th over. However, he was unable to continue and was eventually dismissed for a well-made 50 off 36 deliveries, which put Mangalore in trouble.

Aneeshwar Gautam was sent off for a duck a few deliveries later as Mangalore's demise began to become apparent. Amit Verma quickly followed suit, departing for 8, and in the 17th over, HS Sharath added a few more lusty smashes before leaving for 17. Rain stopped play with 58 needed from 14 balls, and the umpires used the VJD technique to determine in favour of the Blasters.