Pacers, Pujara shine as India dominate day one at Indore against Bangladesh 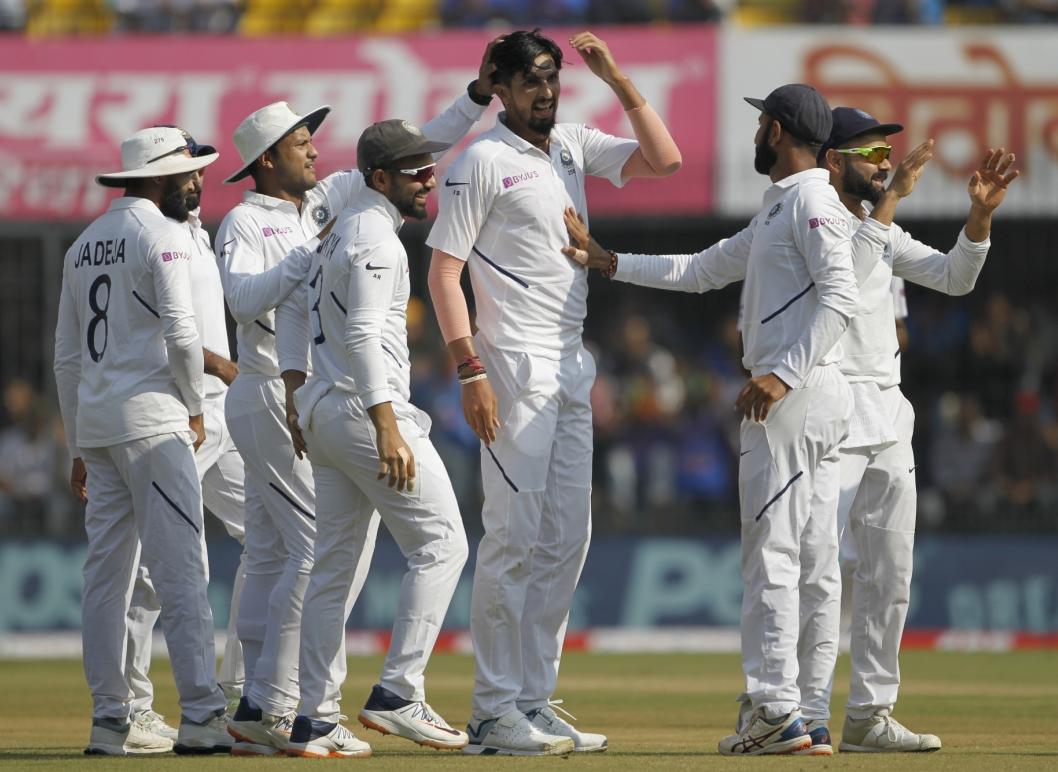 After being asked to bowl on a seaming wicket at Indore on day one, India bowled Bangladesh out for 150 soon after the tea break. Bangladesh went on to dismiss Rohit Sharma early before Mayank Agarwal and a rather proactive Cheteshwar Pujara took them to 86/1 by stumps on day one.

The highlight of the day swung from the Indian pacers to Cheteshwar Pujara as India dominated proceedings at the Holkar Cricket Stadium in Indore. The Bangladesh openers had started off by staying clear of wafting at full, swinging deliveries from the Indian new ball bowlers, but when Imrul Kayes couldn’t resist Umesh Yadav’s teaser, Shadman Islam followed suit by nicking through to the keeper off Ishant Sharma.

Mominul Haque took responsibility up as captain by going back to his no. 3 position. Mohammad Mithun joined forces with him but the partnership that appeared steady failed to blossom when Mohammed Shami softened Mithun up with short balls before slipping in one from wide of the crease to trap him in front.

The arrival of Mushfiqur Rahim gave Bangladesh some security but the experienced batsman was a tad fidgety. He edged Umesh Yadav to the slip cordon but Virat Kohli put down a sitter to give Rahim a life. This followed Ajinkya Rahane’s own generousness when he let Mominul off at slip with Ashwin being the bowler.

It wasn’t to be the first instance of a catch being put down off Ashwin. Rahane would go on to drop two more catches off Ashwin while Wriddhiman Saha also failed to hold onto a chance Rahim offered him off Ashwin.

The off-spinner took matters into his own hands and delivered a brilliant undercutter to clean Mominul up before Mahmudullah played a reckless sweep to clean himself up.

Just before the tea break, Mohammed Shami burst to life and sent back Mushfiqur Rahim with a corker that moved back in with the angle and shattered the stumps. He carried on his fire by trapping Mehidy Hasan in front next ball. The umpires intervened to call tea and save Bangladesh from what seemed like a proper mauling.

But even that couldn’t save them with India rushing through their lower order shortly after tea. Just ten runs were added to the total at the break as Bangladesh were left to rue their decision to bat first on a seaming deck. The Indian seamers took seven of the ten wickets to fall as Ravindra Jadeja, the second spinner, was required to bowl just three overs after coming on in the 48th over of the innings.

India started their innings with aplomb as Mayank drove Ebadot Hossain through cover for a crisp boundary, a shot he would go on to play several times against the seamer later in the day. Rohit Sharma and Mayank quickly went back into their shell as Bangladesh’s new-ball bowlers, Ebadot and Abu Jayed hit good lines.

The ball wasn’t moving around as extravagantly as it did for India, but Bangladesh kept the openers quiet with their discipline. Something was bound to give way and Jayed became the beneficiary when Rohit drove with little feet movement and nicked a good length ball to the keeper.

Bangladesh removed the in-form Rohit early but their task multiplied with Cheteshwar Pujara hitting the ground running. The no.3 batsman took a liking to Taijul Islam’s left-arm spin and tonked him for three fours in an over – twice stepping out to drill him and once rocking back to deftly dab through third-man.

While Pujara was taking apart Taijul, Mayank was driving Ebadot for fun through the covers. Mominul seemed to run out of ideas as the left-arm spinner and the new ball bowler bowled in tandem for 11 overs fruitlessly.

A bowling change nearly brought rewards for the Tigers as Mayank nicked Abu Jayed to the slips but Imrul Kayes put down a dolly to give the Karnataka batsman a life. The partnership was halted on 72 as umpires called stumps but signs are ominous for Bangladesh as they stare at a flat pitch, two set batsmen and a wholesome middle-order that follows on day two.