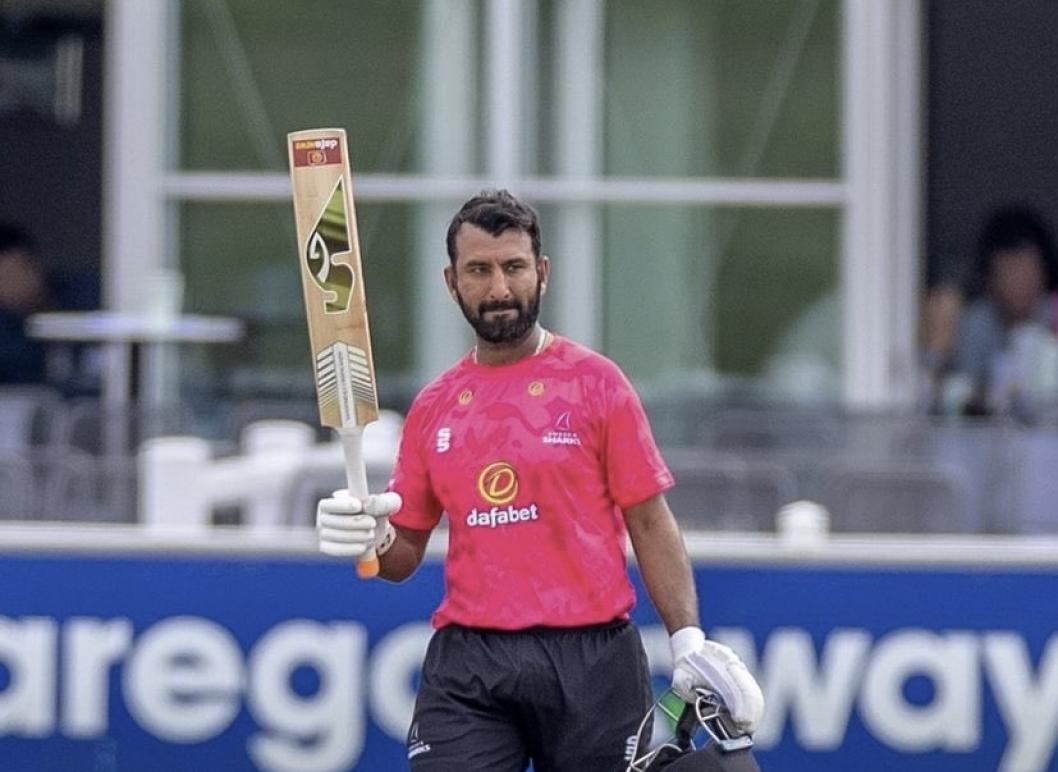 In Test cricket, Cheteshwar Pujara is well-known for his traditional batting prowess and tenacious defence. The right-handed batter, however, has recently demonstrated his talent with his current performance for English county team Sussex in the ongoing Royal London One-Day Cup.

Pujara has scored 367 runs in five games at an average of 91.75 and a strike rate of 120.72, moving him into second place in the league in terms of runs scored. Additionally, two of his century came in back-to-back games.

In Friday's match against Warwickshire, Pujara hit 107 from 79 balls. Additionally, he scored 22 runs off the 45th over, but he was unable to lead his team to victory. As Sussex's captain on Sunday, Pujara scored an incredible 174 runs off 131 balls against Surrey.

With his incredible innings, which included 20 fours and five sixes, Pujara has now surpassed Namibian all-rounder David Wiese's 171 against Hampshire in 2019 to hold the record for the highest score by a Sussex hitter in List A cricket competition in the United Kingdom.

In addition, Pujara surpassed the unbeaten 158 he scored in Rajkot in 2012 while playing for India B to record his highest total in List A cricket.

The most noteworthy aspect of his performance against Sussex was how he saved the team from difficulty at an early stage when they were 9/2.

But Pujara rose to the occasion. Pujara reached his fifty-run mark in 69 balls after scoring 23 runs off his first 45 deliveries. Pujara continued after hitting the three-figure mark in 103 balls with an exciting knock of 174, helping Sussex reach 378/6 in their 50 overs.

Along with Tom Clark, who scored 104 runs, he also contributed to a third-wicket partnership of 205 runs.

Following Clark's demise, Pujara continued to advance until he unleashed destruction on Surrey's bowlers, hitting 74 runs off his final 28 balls before succumbing in the 48th over.

To the amazement of many cricket fans in India and throughout the world, Pujara has so far excelled at lofted shots and even introduced lap shots.

Pujara only had five opportunities to play for India in ODI cricket, but he took use of them to score 51 runs with a strike rate of 39.23 and an average of 10.20. However, Pujara never received a meaningful look-in because of how ODI cricket was developing in the 2013–14 season, with players like Virat Kohli and Rohit Sharma making their way along with Shikhar Dhawan, Ajinkya Rahane, and Suresh Raina in the mix.

His accomplishments for Sussex appear fantastic in this perspective, but it may be too late for him to return to the ODI scene.