Reverse Scoop: Ashwin is cool. No, the coolest. 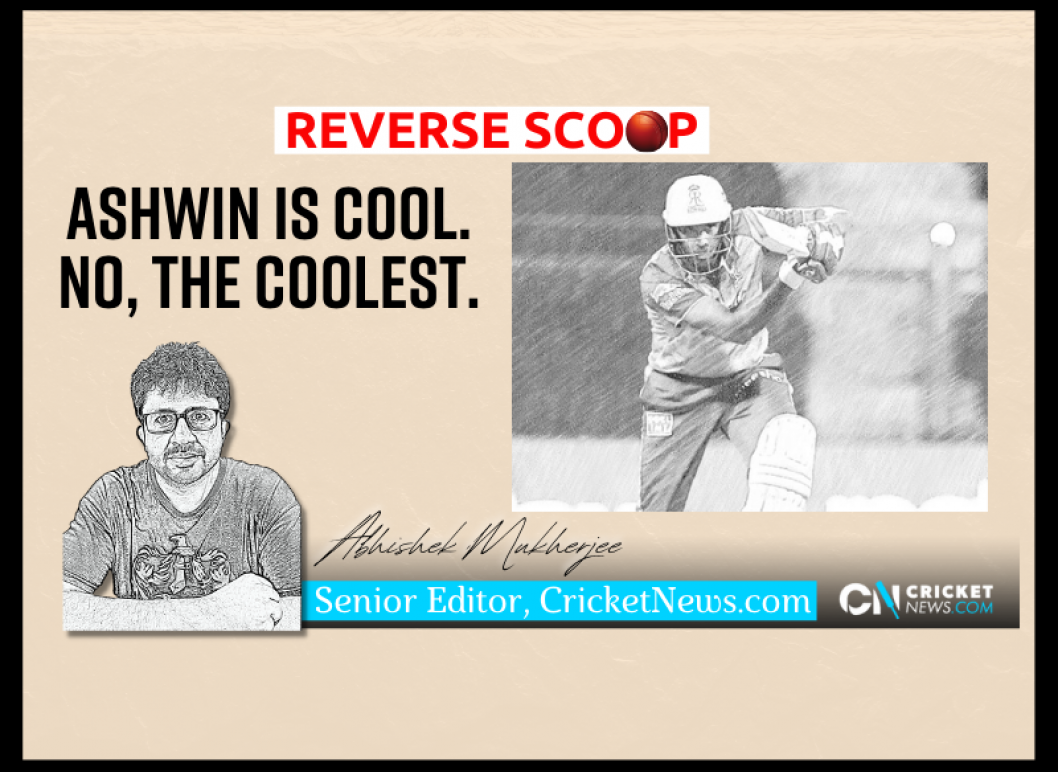 R. Ashwin has almost three thousand runs and 450 wickets in Test cricket. He has five Test hundreds and 30 five-wicket hauls.

But all that makes him merely an all-time great cricketer.

Ashwin is much, much more. He is also one of the coolest cricketers to have walked on this planet.

By that I do not mean trendy apparel or snazzy shades or expensive watches. He may be doing all that too – and why not? – but that can only make you cool. Not the coolest.

Ashwin keeps inventing and innovating with his bowling. Not only does he invent new balls, but he also uses carefully constructed run-ups, even in international cricket.

Ashwin runs out Jos Buttler at the non-striker’s end in an IPL match. There is obvious backlash, largely because some in the cricket fraternity still – in the 21st century – believe in the existence of the extremely subjective concept of ‘Spirit of Cricket’.

Ashwin does not care. He will probably do it again. Or perhaps not. But if he does not, it will not be because he was shaken by the backlash. It will be because he may not choose to, despite the laws providing him with the option.

Cricketers – and travelling journalists – used to write diaries on tours. Sometimes they became books. They serve as invaluable documents for cricket historians, especially for once-in-a-lifetime tours like the 2020/21 Border-Gavaskar Trophy.

But old books are difficult to find. Libraries, second-hand book stores, the third page of your Google search…

Ashwin interviews India’s coaching staff. He subtitles the videos. He releases them on his YouTube channel when the series was still fresh in our memory.

Free of cost, for everyone.

When you run a single and a fielder’s throw is deflected off your bat, you are not supposed to run. Nobody knows why, because nobody asks why. It is within the laws, but nobody wants to take advantage.

Ashwin does. When they criticise him, he simply refers to the laws. He is right, of course. And then he assures that he will do it again. Why not, if he is doing the right thing?

From time to time, male superstars raise their voice on women’s cricket, or the lack thereof, of the clearly visible discrimination no one wants to do anything about.

He talks to the Rajasthan Royals owner about buying a team in the Women’s Indian Premier League the fans are promised to time to time.

An IPL match reaches the 19th over. Ashwin has five Test hundreds. He can be elegant on his day, caressing the ball to the fence. He is not a slogger.

But there is a six-hitter waiting in the stands, Riyan Parag. Ashwin knows he has to get out of the way for Parag to come in.

He can try slogging, but that may end up in him getting a single. He may try getting out hit wicket, but that would waste a ball.

He just walks off. Retired out, we are told. A ploy within the laws. There is backlash, though a bit muffled this time.

It had been discussed in the Royals camp, we are later told. It does not matter. Strategies keep being discussed in team meetings. On the field, we seldom see outrageous deviations from the traditional.

We see unorthodox shots and balls and field placements but not deliberate dismissals.

It took fifteen seasons for that to happen in the IPL.