Reverse Scoop: The Hundred is staying, deal with it

The first night of The Hundred was slightly confusing – and just not because they had reduced the duration of the innings from 120 balls to 100 or changed the number of balls per ‘set’ or allowed a bowler to bowl consecutive overs.

Cricket had seen most of that. Test cricket has seen four-, five-, six-, and until as late as the second half of the 1970s, eight-ball overs. The Halifax Cup, the premier cricket contest of the USA in the 1910s, used ten-ball overs.

Consecutive overs? Umpiring errors allowed Warwick Armstrong and Alex Moir to do that in Test cricket in the 21st century. However, until 1889, a bowler could legally bowl consecutive overs up to twice in an innings.

Part of the confusion was around the scoring, for it showed runs left, balls left, wickets – and little else. Since this was a 100-ball game, the number of balls left also provided the percentage of innings left.

For the first time, cricket upgraded itself to the metric system.

The simplicity of The Hundred was a blow to our inherent nature of taking pride in the complexities of the laws of cricket.

But simplicity is just one field in which The Hundred managed to trump the 20- and 50-over formats. It is a format more inclusive than any other.

The WBBL has the same team names as the BBL but is not played at the same time. Until 2018, the T20 World Cup often featured women’s and men’s matches on the same days at the same venues, but not necessarily involving the same teams.

The Hundred has married the two. The teams bear the same names, and the same pair of teams play women’s and men’s matches at the same venue, almost always on the same night. Matches get over inside two and a half hours. Two matches last significantly less than a day of Test cricket, let alone a full ODI.

It brought women’s cricket to the forefront like never before. The WBBL and the Kia Super League are there, as is the farcical, four-match Women’s T20 Challenge. But never in the history of cricket have women’s cricket teams been packaged the same way as men’s teams. 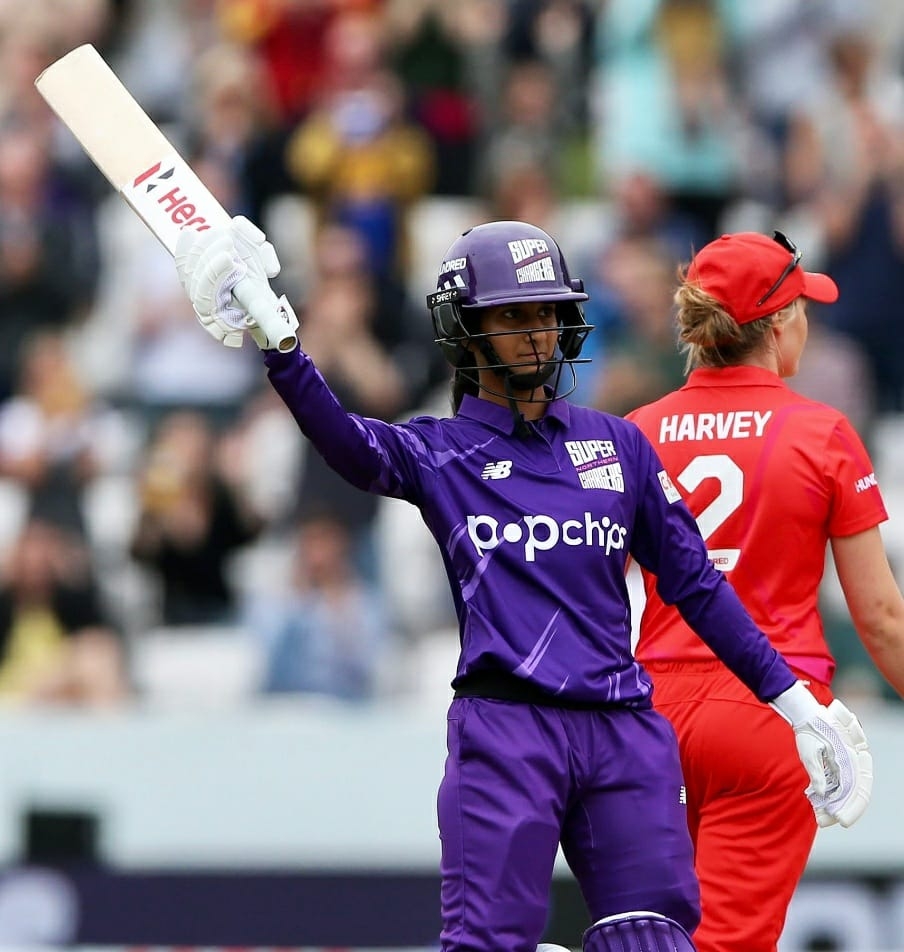 Jemimah Rodrigues was one of the many who earned big praise, courtesy of The Hundred. (IMAGE: IANS)

Despite the many attempts at gender equality, female cricketers still play and earn less than their male counterparts. While that has not changed significantly, The Hundred has been a giant step in terms of visibility.

There was scepticism, of course, but the fans responded. All women’s, and some men’s, matches were telecast for free in England, ensuring more visibility than anyone had expected.

For a long time, the English cricket fraternity used to believe that colonials were incapable of matching the prowess of English cricketers. English domestic cricket was supreme in prestige.

It took less than a day in 1878 to rock the idea at the core. When a team of touring Australians beat a very strong MCC side by nine wickets at Lord’s. Fred Spofforth took 10-20 in the match and Harry Boyle 9-17, and the MCC were bowled out for 33 and 19, losing 20 wickets in 184 balls.

Four years later, the Sporting Times published a mock obituary of the English side. Anglo-Australian cricket was established.

Test cricket has never looked back since.

Until the 1960s, the English cricketers were classified – officially – into amateurs (Gentlemen) and professionals (Players). The Players earned from playing cricket. The Gentlemen, the elites, did not – though they held important posts in the cricket establishment and made considerably more money out of cricket. Gentlemen and Players used separate dressing-rooms and gates during matches, and were offered different facilities.

Gentlemen vs Players used to be one of the most significant annual fixtures. More importantly, only the amateurs were allowed to lead England. A cricketer of Wally Hammond’s stature had to seek an alternate source of income – because he wanted to lead England.

The system was abolished in the 1960s.

It was also the decade when interest in the County Championship had started to dwindle. Counties suffered financial losses. The organisers decided to give limited-overs cricket a go. Sixty-five overs, one innings a side, and… a sponsor, Gillette.

Limited-overs cricket took off. It was killing cricket, they said. But everyone soon figured out that apart from the one-day duration, it also produced more of what the fans wanted to see: fours, sixes, and wickets.

And as cricket picked up in popularity, especially after intensive television coverage, an argument over television rights was only a matter of time, as was the call for high pay scales for cricketers.

With his purse, coloured clothing, night cricket, and television coverage of unprecedented quality, Kerry Packer addressed both problems. As always, there was criticism, but majority of fans loved it.

It took a little over two decades for white balls and coloured clothing to completely take over ODIs, even the ones that got over before dark.

But even that excitement seemed to subside in the late 1990s, when teams seemed to play floodlit triangular ODI tournaments all the time. In 2003, ECB launched the first Twenty20 tournament, roping in live bands, DJs, and cheerleaders. The IPL made cricketers more financially than they ever have been – and others followed suit.

As expected, there was uproar.

ALSO READ: Reverse scoop: Save your superlatives for the Rashid Khans, cricket

Cricket has been reluctant to change at almost every step, perhaps more than any other sport.

Here we are again, at the crossroads of history. The cricketers, the fans, the establishment have all embraced the Hundred, a carnival as inclusive as it is entertaining without any compromise in the quality of cricket.

This is our chance to be on the right side of history.