Reverse Scoop: Let us talk about Basil D’Oliveira a bit 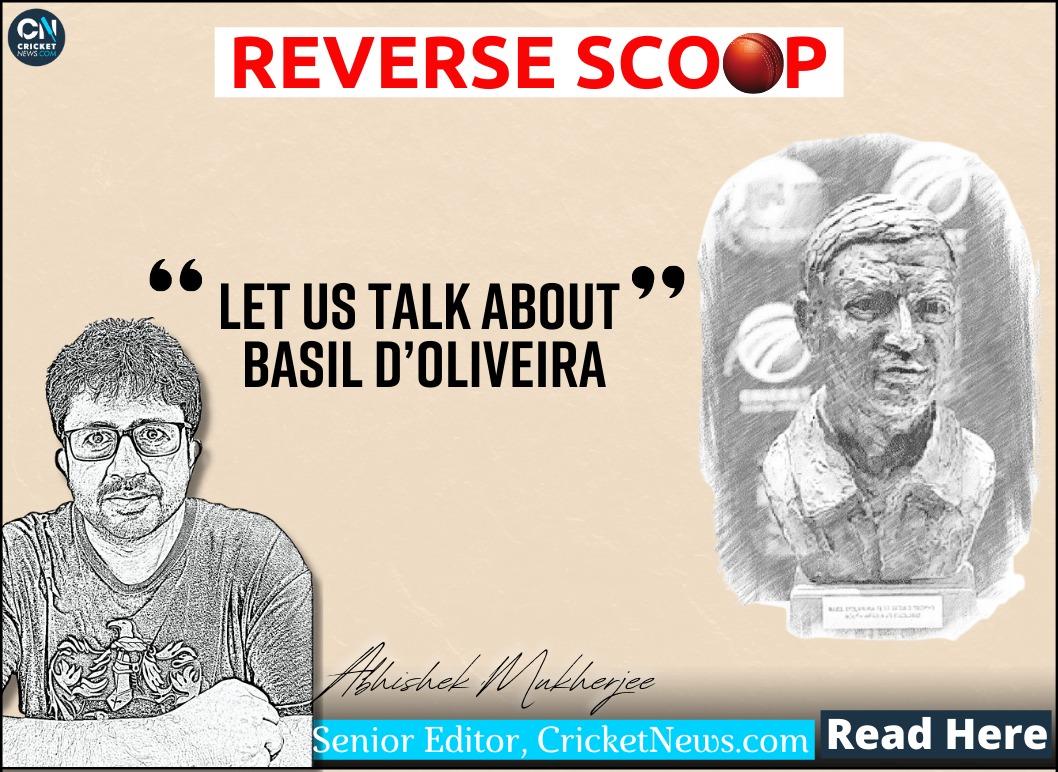 Last year’s Test series between England and West Indies was historic for at least two reasons. First, cricket fans around the world breathed a sigh of relief as Test cricket returned after the hiatus Covid-19 had pushed it into. And, just before the first Test match, at Southampton, when the cricketers from both sides took the knee to support the Black Lives Matter movement.

The impact of the gesture increased was amplified by the shared history of the two nations. It had barely been six decades since West Indies had taken the revolutionary decision of appointing Frank Worrell their first ever non-white captain. As the series progressed, during a rain break, Michael Holding asked hard-hitting, uncomfortable questions on air.

Over the next year, several allegations of racism arose in the cricket fraternity. In September 2020, Azeem Rafiq, a Yorkshire off-spinner, accused his former club of racism. Yorkshire launched a probe. Multiple allegations, some of them against former white cricketers, arose in the South African cricket community. Some issues have been addressed. Some remain unresolved.

But racism in cricket had been discussed – if not dealt with – like seldom before.

In a world that promises to be more and more inclusive, it is important to remember Basil D’Oliveira, who was born on 4 October 1931.

D’Oliveira was Cape Coloured, in other words, of mixed heritage. That, and only that, resulted in him being stripped of basic citizenship rights in South Africa. He was an incredibly talented cricketer, but ineligible to play for South Africa.

Of course, D’Oliveira was not the only coloured South African all-rounder who missed out on playing for the nation. Taliep Salie, Cec Abrahams, ‘Tiny’ Abed, Goolam Abed, Denis Foreman, Eric Majola, Khaya Majola… the list is long.

But D’Oliveira did something else. He was aware of the impact South Africa’s abnormal racist policies had on John Arlott. By 1959, Arlott was a household name. D’Oliveira, desperate to escape the abnormal society that prevented him from playing at the highest level (and, indeed, more), wrote that now-famous letter: ‘Dear Mr Arlott, I daresay mention this is only a minor detail compared, I presume, to your other escapades, but I am sure you would try your best and use your powerful assistance to help me…’

Arlott helped D’Oliveira move to England to play in the Lancashire League. He had to adjust to the green pitches and fickle weather, but that was nothing compared to what he awaited off the field. Forever used to disdain back home, he was surprised to be treated like a celebrity, just like any overseas professional in England. It came as a shock when he found out that passengers of colour were allowed to sit with the whites and not in a cordoned off area.

Back home, there used to be cordoned sections even in the stands of cricket grounds. The non-whites, who formed 80 per cent of the South African population, were restricted to these tiny stands.

D’Oliveira took the Central Lancashire League by storm. He would have been the most biggest superstar of the time, had Garry Sobers not been playing in the league as well. They went head to head. In 1960, D’Oliveira averaged 48.95, slightly more than Sobers’ 48.39, and took 71 wickets at 11.72. But while Sobers was already being hailed as among the best in the world, his rival was yet to play First-class cricket for no fault of his.

Days were running out for D’Oliveira. He was thirty-two by the time he played for Worcestershire. Worried about not being picked for being too old, he had registered himself as a 1934-born, taking three years off his age. In 1966 he played Test cricket. After 10 Test matches, his average stood at 50.33. What if he had played Test cricket in his prime?

The most significant moment, of course, was the Oval Test match of 1968, when D’Oliveira scored his famous 158. ‘Oh Christ, you’ve put the cat among the pigeons now,’ uttered umpire Charlie Elliott when he reached his hundred.

The most prophetic statement in cricketing history? Perhaps.

After a brief lean patch, D’Oliveira had been dropped from the Test side before that. Roger Prideaux had impressed on debut in the previous Test, and was set to play at The Oval. He missed out due to pleurisy, and D’Oliveira was recalled.

The hundred at The Oval put D’Oliveira into contention for the England’s Test squad to South Africa. But the MCC decided against it. Maintaining a diplomatic equation with South Africa had seemed more important.

There was nothing new in this. Like Australia and New Zealand, England had been comfortable playing South Africa despite the apartheid government. As per ICC rules, South Africa should have been stripped of Test status after they left the Commonwealth in 1961. But England, Australia, and New Zealand had voted for them. The matches retain their Test status even today.

Now, in 1968, like Prideaux, another injury surfaced. This time it was Tom Cartwright, who pulled out of the tour. And the MCC selectors replaced Cartwright with D’Oliveira.

The South African government refused to accept a touring English side with D’Oliveira in it. The butterfly effect led to a global boycott on South Africa for two decades.

D’Oliveira continued to play Test cricket. South Africa did not.

Years later, D’Oliveira, role model of thousands of coloured South Africans, met Nelson Mandela, an ardent cricket fan. There was acknowledgement: ‘Thanks for coming, Basil. You must go home now. You’ve done your bit. Tell your family to look after you. They must look after you now.’

And then, there was the other emotional moment, in 2000, when South Africa named their Cricketer of the Century. Graeme Pollock won the honours. The nominees included white Test cricketers Aubrey Faulkner, Dudley Nourse, Hugh Tayfield, Barry Richards, Mike Procter, and Allan Donald as well as the non-Whites Eric Petersen and Frank Roro, neither of whom was allowed to play for South Africa.

And then, there was the Basil D’Oliveira, who had played Test cricket, not for South Africa but for England. In his cricketing days, he was prohibited from stepping on to the Newlands turf. Now, when he walked out for the first time, he received a loud ovation.

As the barriers break down, albeit slowly, it is perhaps apt to celebrate D’Oliveira on his birthday.