Reverse Scoop: Looking back at 2021 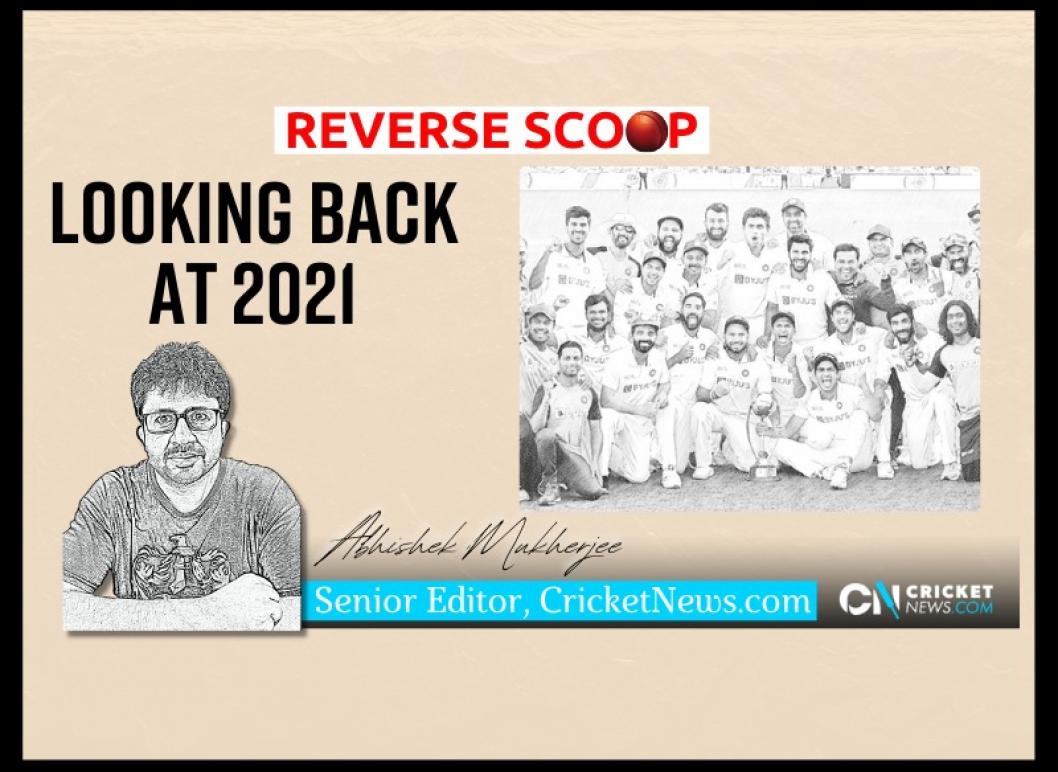 Miracle of the Year: India breach the Gabba

Let us just say that a team were bowled out for 36, lost their captain, replaced a batter with a bowler for the second Test, lost both frontline spinners (who were also all-rounders), another batter, had to slot an opener in the middle order, were without a fast bowler, lost four other fast bowlers, fielded a net bowler, had a wicketkeeper bat with an injured hand, battled quarantine, and – ended the home team's 32-year long streak at a venue to win the series. Yes, that is about it.

The target was only 49, but somehow Canada managed to take it to the last over. Even then, they needed just three with five wickets in hand. What followed was dot, run out, bowled, bowled, caught – and another run out, while attempting a second run. No bowler has lived up to her surname like Laura Boss that day.

Innings of the Year: Kyle Mayers

Until this year, the highest fourth-innings score by a debutant in a Test match used to be Abbas Ali Baig's 112. Against Taijul Islam and Mehidy Hasan Miraz on a difficult Chattogram pitch, Mayers nearly doubled that, with 210 not out. Chasing 395, West Indies were 59/3 when Mayers came out, but it did not matter.

Spells of the Year: Frederique Overdijk and Ajaz Patel

It is difficult cannot improve on figures of 4-2-3-7 – the best figures in Twenty20 cricket, across gender, domestic or international. Overdijk might not have been the most renowned Dutch bowler until then, but her show against France definitely made the world take notice.

But then, there is also the case of Ajaz, whose 10-119 at the Wankhede Stadium are the third 10-wicket haul in Test cricket, and the only one away from home (though he was born in Mumbai) as well as in the first innings. A tough call. A tie.

Duracell of the Year: Rashid Khan

Bowling a hundred overs – 600 balls, to be more specific, for overs used to be of varying lengths – in a Test match used to be a feat in the early days of Test cricket, when bowling changes used to be far less frequent. It has happened only thrice in the last fifty years, and never in the 21st century. However, with 36.3-3-138-4 and 62.5-17-137-7, Rashid fell just four balls short of being the first bowler.

Superstar of the Year: Maeve Douma

Against Cameroon, Kevin Awino, Rita Musamali, Immaculate Nakisuuyi and Janet Mbabazi of Uganda all committed the same error against Cameroon: they left the crease too early when Douma was bowling. She Mankaded all four. ‘It is a beautiful opportunity to use’, explained Douma, who, at 16, is clearly more mature than some eminent names in the game.

Innovation of the Year: The Hundred

With city-based franchises, equal matches for women, simplification of laws, the carnival atmosphere, significant presence of children in the crowd, and excellent viewership records, The Hundred delivered a much-needed blow to sections of English cricket that preferred to stick to traditions even at the cost of extinction. The pay disparity between genders, one of the few issues, will be addressed next year.

Heartbreak of the Year: Thailand Women

Thailand were at the top of the Group B points table when the African qualifiers had to be called off due to Covid-19. They did not qualify because of their pre-tournament ratings. Worse, they became ineligible for the ICC Women's Championship, and their matches were stripped of ODI status. One must remember that the only reason they, despite playing outstanding cricket, do not have Full Membership is because their Men's team is not good enough – and Full Membership has traditionally been defined by the performance of the Men's team.

Family of the Year: The Brindles

Arran Brindle led England in 2001, but at 39, she was restricted to playing for Owmby Trojans in Lincoln & District Division Three. Chasing 142 against Nettleham CC, Owmby won by 10 wickets, Arran scoring 94 of the runs. At the other end, with 32 not out, was her 12-year-old son Harry, who had taken 4-27 earlier in the day.

Redemption of the Year: Jhulan Goswami

Australia needed three off the last ball, and Goswami had Nicola Carey caught... only for the full toss to be called a no-ball for height. Carey pushed the next ball for two, and Australia extended their world record winning streak to 26 matches.

But that was where it ended. With three to score off four balls and two wickets in hand, Goswami lofted Sophie Molineux for a straight four to redeem herself and the team.

Quote of the Year: Rahul Dravid

‘We have eleven to choose from and all eleven are playing.’
– There is little a coach can do when your squad is down to 11 men, as India's was, before the third T20I in Sri Lanka. These are troubled times.