Reverse scoop: Something amiss in the Virat Kohli sacking 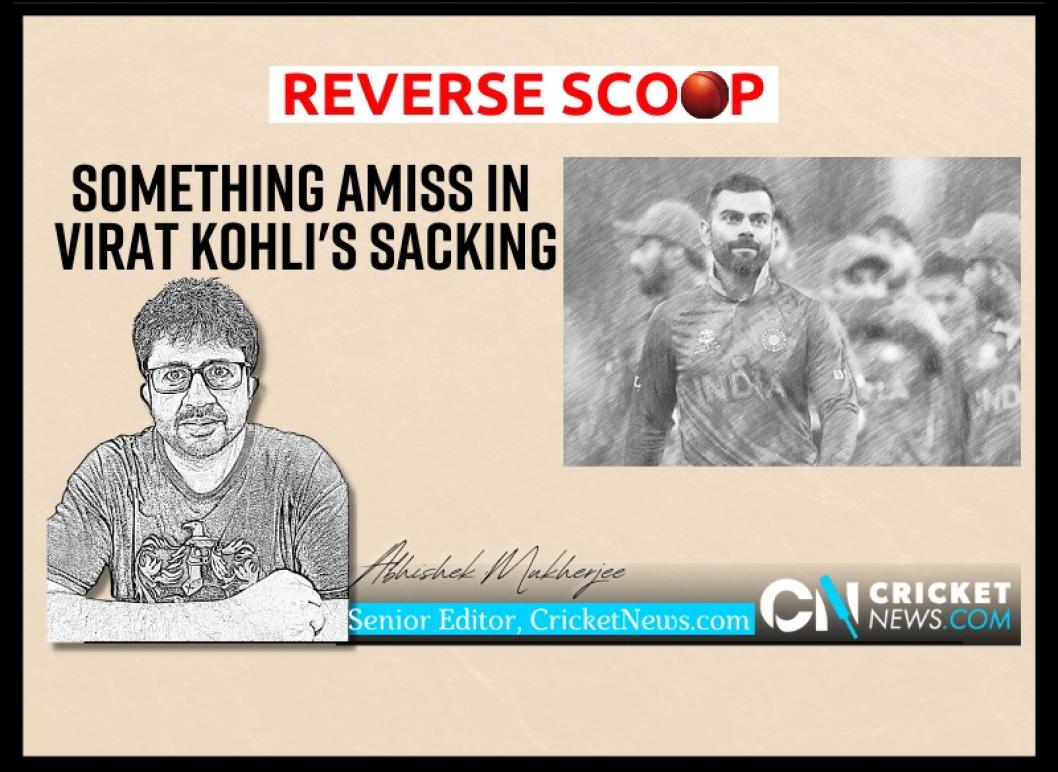 About sixteen years ago, the Indian cricket team witnessed arguably their worst rift of the 21st century, between captain Sourav Ganguly and coach Greg Chappell. Things turned murky, at times not befitting of their stature. The relationship between the two is unlikely to heal.

A cricketer, even a captain, getting dropped from the side is not unusual. Neither are comebacks. Coaches have resigned as well. Captains and coaches have clashed. Nothing earth-shattering happened during the Ganguly-Chappell saga – though sections of Indian media had tried to convince the readers otherwise.

The BCCI have handled the appointment of captains efficiently since then. At one level, they took a gamble by appointing M.S. Dhoni, who hails from outside the traditional powerhouses of Indian cricket and still relatively new to the highest level, as limited-overs captain. At the same time, they appointed Anil Kumble as Test captain less than a year before he eventually retired. They wanted to ease Dhoni into the role.

Dhoni retired from Test cricket in 2014/15 and resigned as limited-overs captain in 2016/17, and Virat Kohli took over. The transitions were seamless, since Dhoni resigned on his own, as did Kohli from T20Is, just ahead of the 2021 T20 World Cup.

Then things went downhill. Ahead of the South Africa tour, Rohit Sharma, who had already taken over as T20I captain, replaced Kohli as ODI captain as well. This is not a first – captains had been replaced in the past – but the BCCI’s lack of clarity over the matter raised many an eyebrow.

They mentioned Rohit’s appointment in a tweet, and in what can hardly be called a footnote in a press release. Kohli was not even mentioned. The BCCI rectified that by paying homage to Kohli in a subsequent tweet, but that came twenty-four hours later.

There was no obvious reason for sacking Kohli as the ODI captain. Under him, India have won 65 ODIs and lost 27. With a cut-off of 50 ODIs, this win-loss ratio of 2.407 has been exceeded by only Clive Lloyd, Ricky Ponting, and Hansie Cronje – who led arguably the three greatest sides in ODI history. In his last ODI series, Kohli had led India to a win against England, the top-ranked side in the format.

Ganguly, BCCI president by now, mentioned that the selectors had wanted the same captain for ODIs and T20Is, though he did not mention a specific reason for them wanting that. He also pointed out Rohit’s record as ODI captain (despite him leading India in only 10 ODIs).

Kohli’s sacking, thus, made little sense. And yet, more than the actual sacking, what stood out was BCCI’s curious lack of clarity regarding the announcement, and the initial absence of Kohli from their releases.

It was not the first time the BCCI had appointed captains under such dubious circumstances.

In 1984/85, there were calls for Sunil Gavaskar’s resignation after India had done poorly against England at home. The selectors discussed for three and a half hours before retaining him as captain. However, BCCI joint secretary Ranbir Singh Mahendra requested Gavaskar to scale the wall of the team hotel in Chandigarh en route to meet the selectors: the press had been waiting outside the gate.

On their 1979 tour of England, India did poorly in the World Cup and lost the Test series. On the flight back home, the entire Indian team heard the pilot’s announcement, of captain S. Venkataraghavan being replaced by Gavaskar. Venkat was not informed personally.

Indian captain Mansur Ali Khan, the erstwhile Nawab of Pataudi, missed the second Test of the 1974/75 home series, against the West Indies in Delhi, due to an injury. Until hours before the match, no one knew who would lead India. Eventually Venkat got the nod.

In the home series of 1959/60 against the West Indies, India appointed four captains – Polly Umrigar, Ghulam Ahmed, Vinoo Mankad, and Hemu Adhikari – for five Test matches. Mankad’s appointment was spectacular: the selectors dragged him to the toilet to convince him barely in time for the toss. Adhikari, a Lieutenant Colonel, was summoned from his post in Dharamsala.

BCCI had not always been transparent while appointing captains. Some acts could easily have been avoided. With the cricketers turning professional and the BCCI consolidating their supremacy in global cricket, that trend seemed to have stopped since the Ganguly-Chappell saga.

Whether they want to continue with that or return to the 1950s is entirely up to them.