Reverse Scoop: Thailand Women did not deserve this 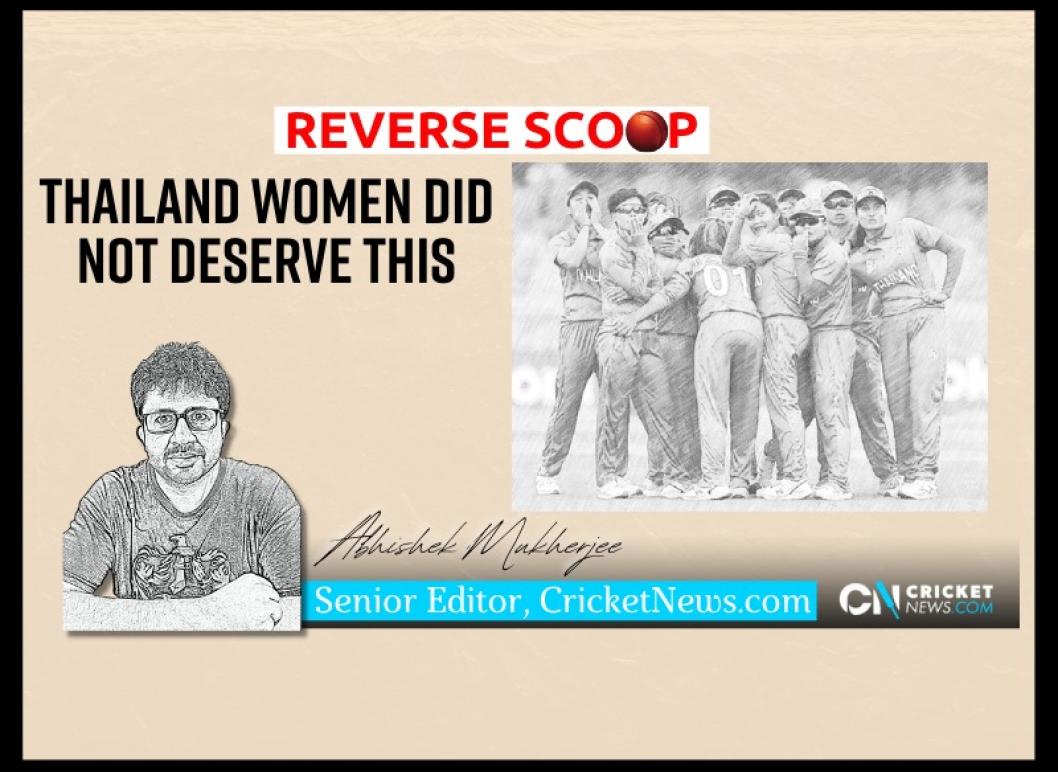 It all happened too quickly. As the new wave of Covid-19 spread in southern Africa, it was 2020, or even early 2021 all over again. And as they threatened to close down international borders – again – sports took a hit.

The 2021 ICC Women’s World Cup Qualifiers was being played in Zimbabwe. That had to be called off. Papua New Guinea had already withdrawn from the tournament after some cricketers had tested positive for Covid-19. Now, the tournament had to be cancelled after eleven matches.

West Indies, Pakistan, and Bangladesh – the three teams with the highest rankings – automatically qualified for the World Cup. While there are little doubts that they have earned their places, the points table at the time of cancellation threw some questions.

Group A featured four teams (ICC had not named a replacement for Papua New Guinea), who managed to play three matches. In these matches, the Netherlands lost to both Sri Lanka and Ireland, while the West Indies beat Ireland. There was no clear dominant side.

Group B, on the other hand, had five teams, who played eight of their ten matches. Zimbabwe versus Bangladesh and Pakistan versus the United States of America were the only matches that had to be called off.

After eight matches, Thailand topped the points table with three wins each, followed by Pakistan and Bangladesh, on two wins each from three matches. They were set to qualify for the Super Sixes. In fact, they could have even made it to the top two in the group (a top rank seemed unlikely).

Thailand’s wins had come against Zimbabwe, Bangladesh (both Full Members), and the USA. Even in their defeat, they had managed to bowl out Pakistan for 145. There was no doubt that they were as good as the others in the group.

While Sri Lanka and Ireland have reason to be upset as well, they may seek solace in the fact that they had qualified for the next edition of the ICC Women’s Championship. Thailand did not get a shot at that either, so they were stripped of guaranteed funding and ODI matches.

Could something be done? The 1992 Men’s World Cup featured eight teams. The matches were played in Round Robin League format. When South Africa returned from exile, they got automatic entry. No team was replaced. Every team played one more league match.

The 2021 Women’s World Cup will be played in exactly the same format, but ICC did not make an effort to replicate 1992. True, they were technically not organisers in 1992, but they could at least have used it as an example. There is no evidence that New Zealand Cricket (the hosts), the other teams, the broadcasters, or anyone else being likely to raise an objection.

Thailand would not play because ICC would prefer to remain inflexible.

But that was not all. In September 2018, ICC had announced that all matches in the Qualifiers would be given ODI status. Thailand and the USA, therefore, played the first ODIs in their history – until ICC decided to strip the matches of ODI status.

It was 1970 all over again, when England cancelled their home series against South Africa in the aftermath of the Stop the Seventy Tour protests. Instead, they hosted a five-match series against a Rest of the World XI. These matches were given Test status, only to be taken away later. Poor Alan Jones lost his Test cap. Only in 2020 was he granted a numberless England Test cap.

For Thailand and the USA, that was the fate of the entire teams.

Earlier this year, the ICC had also announced that matches between Full Members would get Test and ODI status. Thailand, not a full member, did not have such rights – despite being as good as two other teams in the same group.

The first seven ICC Full Members – England, Australia, South Africa, West Indies, New Zealand, India, and Pakistan – had been granted the status based on invitation. The next five – Sri Lanka, Zimbabwe, Bangladesh, Ireland, and Afghanistan – had to ‘earn’ their way over years of cricket various tournaments.

Teams have – inexplicably – been granted Full Member status based on how good their Men’s teams had been. It did not matter to the ICC that Afghanistan, despite getting there in 2017, did not field a women’s team until 2021 (and are unlikely to for some time). Afghanistan Men had continued to play Test cricket.

Thailand’s case is unique. Their Women’s team are the only one who play cricket at par with the Full Member sides, something their Men’s team does not. Thailand Women are currently ranked 11th in T20Is. The Men’s team is placed 67th.

With a 40-match cut-off, Thailand Women’s win-loss ratio (1.928) is next to only the ratios of England and Australia. And their delightful brand of cricket and incredible demeanour won many a heart during their maiden appearance at the T20 World Cup, in 2020.

There is little doubt that Thailand Women belong with the best, but they will not be allowed to play against them. And the only reason being the quality of their Men’s team.

Something is not right.