Reverse Scoop: A two-tier World Cup is unfair and ghastly 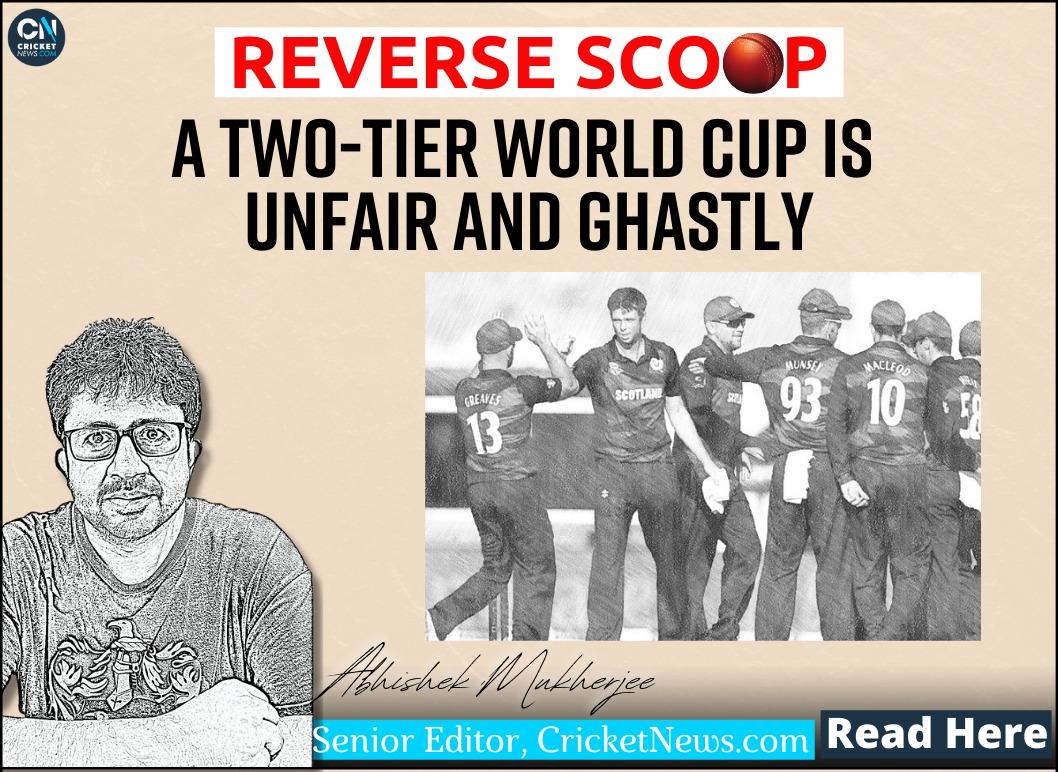 While previewing the 1983 World Cup for Wisden Cricket Monthly, the venerable David Frith questioned India’s automatic qualification for the World Cup. He insisted they be made to qualify if they did not improve their performance significantly in 1983.

One can see Frith’s reasoning. Until then, India had played six matches across two editions. They had won one – against East Africa. One of their five defeats, in 1979, came against Sri Lanka, then an Associate Nation.

India, as even the most basic cricket fan is aware of, went on to win the World Cup. Man Singh, a resident of New Jersey, suggested in a letter that Frith should literally eat his words. Frith, forever the sport, got his ‘meal’ photographed and shared.

They won the 1996 World Cup, undefeated.

Zimbabwe started their World Cup journey, in 1983, with a shock win against Australia. After four editions, their record stood at three wins (including one against Associates Kenya), 22 defeats. Then they reached the Super Sixes in 1999 and 2003.

Kenya stunned the West Indies in the 1996 World Cup, but it remained their only win from their first two editions, from 12 matches. In 2003, they beat three Test-playing nations – Bangladesh, Sri Lanka, and Zimbabwe – en route to the semi-finals.

Ireland debuted in 2007. They tied with Zimbabwe and beat Pakistan to reach the Super Eights, where they beat Bangladesh. In 2011, they beat England and the Netherlands; in 2015, West Indies, UAE, and Zimbabwe.

India, Sri Lanka, Zimbabwe, Kenya, and Ireland, along with other teams, did well because the organisers did not shun them at the first sign of failure. They had wanted to expand the tournament, or at least not go backwards.

Of these teams, only India and Sri Lanka featured in the 2019 World Cup. The others were denied qualifications, because the ICC had decided to shrink the tournament to ten teams, two fewer than the number of Full Members.

The argument is not backed by data.

Only four matches in the 2015 edition were decided by a margin of 30 runs or fewer (the fifth-lowest margin was 62 runs). One of these four involved both Ireland and Zimbabwe; a second, only Zimbabwe.

What about matches won by sides batting second? Ten matches were decided by a margin of less than three wickets or two overs (or fewer). Two of these were Afghanistan versus Scotland and Ireland versus the UAE, and five others involved at least one of Scotland, UAE, Afghanistan, and Zimbabwe.

In other words, nine of the 14 closest matches of the 2015 World Cup involved at least one team that was not allowed to feature in the 2019 World Cup.

In a time when cricket should be screaming out loud for more teams to establish itself as a global sport, it chose to go backwards.

The World Cup, of course, is not the only major tournament.

The ICC Champions Trophy was initiated in 1998 with nine teams, as a knockout tournament to raise funds for the development of cricket in Associate Nations. Bangladesh did not feature in the first edition, but did a marvellous job of hosting. In 2000, Kenya and Bangladesh both featured in an eleven-team edition in Kenya.

Since 2019, ICC even assigned T20 International status to any T20 match between two nations.

However, there is a catch. Despite having to go through a full-fledged qualification, not all 16 teams are ‘allowed to’ play the Full Members. Eight Full Members qualify directly, leaving four spaces for the ‘less privileged’ to battle out.

Papua New Guinea and the Netherlands were the two best teams of the Qualifiers, played in 2019. They played in the final. But that did not make them eligible to play the Indias and Australias and Englands and Pakistans: they had to go through another round of qualification.

The reason, presumably, is the same – too many one-sided matches.

Papua New Guinea lost to Oman by 10 wickets. The Netherlands were bowled out for 44 against Sri Lanka.

But then, India, too, lost to Pakistan by 10 wickets, and the West Indies got only 55 against England.

It is not right to call one set of matches one-sided and the others fiercely contested.

Just as it is not right to make some teams qualify twice and some others, not even once.