Reverse Scoop: Use DRS for height and line, maybe? 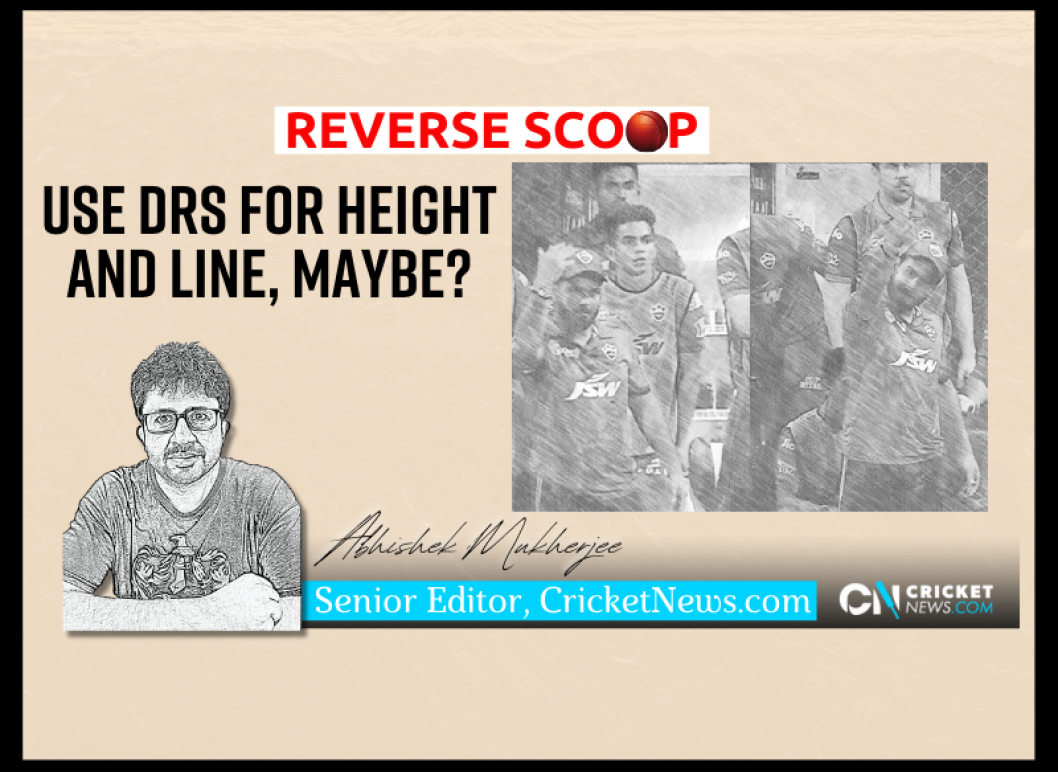 Delhi Capitals needed 36 off the last over to beat Rajasthan Royals that night at the Wankhede Stadium. Rovman Powell took them halfway there, by dispatching the first three balls, from Obed McCoy, for sixes.

At this point, the focus shifted from the ground to the Delhi dugout. Powell’s teammates were not celebrating, as one would expect them to. Instead, Delhi captain Rishabh Pant, along with at least one teammate, was signalling Powell and Kuldeep Yadav to come off.

The third ball had been a high full toss. Powell had stepped out to biff it over mid wicket. A six, but should it also have been called a no ball?The Delhi camp had certainly thought so.

But Nitin Menon and Nikhil Patwardhan, the on-field umpires, did not think so. So sure were they of their verdict that they did not even refer to Yeshwant Barde, the television umpire.

Had Powell and Kuldeep walked off, Rajasthan would have won the match on a concession.

Pant was later fined his entire match fee. Shardul Thakur, also part of the act, was fined half his match fee. Assistant coach Pravin Amre, who actually stepped on to the field to request Menon and Patwardhan to refer to Barde, was banned for a match (and fined his fees).

The matter was done and dusted. Discussions over avoidance of a repetition, however, continue.

The television umpire can, of course, check the height for every ball in the same way they do for the foot of the bowler. Since this will apply only to full-tosses (and very high bouncers, for wides), they need not check for every ball. However, there is a problem.

Powell had, as mentioned above, met the ball outside the crease. At that point, the ball was above his waist, but it was also dipping. Law 41.7.1 states: ‘Any delivery, which passes or would have passed, without pitching, above waist height of the striker standing upright at the popping crease, is unfair. Whenever such a delivery is bowled, the umpire shall call and signal No ball.’

The legality of the ball, thus, would have depended on guesswork by the umpires and nothing else. Based on the trajectory of the ball until the point of impact, they would have had to estimate – correctly – where the ball would have passed the batter had he been standing upright inside the crease.

Even with television replays that is a difficult task. Checking the foot is easier, for it involves observation, not prediction. To assess the possible height at the crease, one needs to use projections. Hawkeye does that, but it is too time-consuming a process to be used multiple times over the course of a match, more so given how frequently teams fail to keep up with the over rate during the IPL.

However, with technology at their disposal, the authorities can always club the calls with the DRS, a process still restricted to dismissals. DRS was introduced to minimise umpiring errors, to equip the sides to question – and attempt to overrule – an umpiring decision they thought were wrong.

Making close calls like height (for no-balls) and line (for wides) of the ball eligible for DRS will be another step towards reducing human errors. If time is an issue, the number of referrals can remain what they are – two or three per innings depending on the format. That will prevent the sides from hesitating to refer unless they are absolutely certain.