Reverse Scoop: Why 83 is important 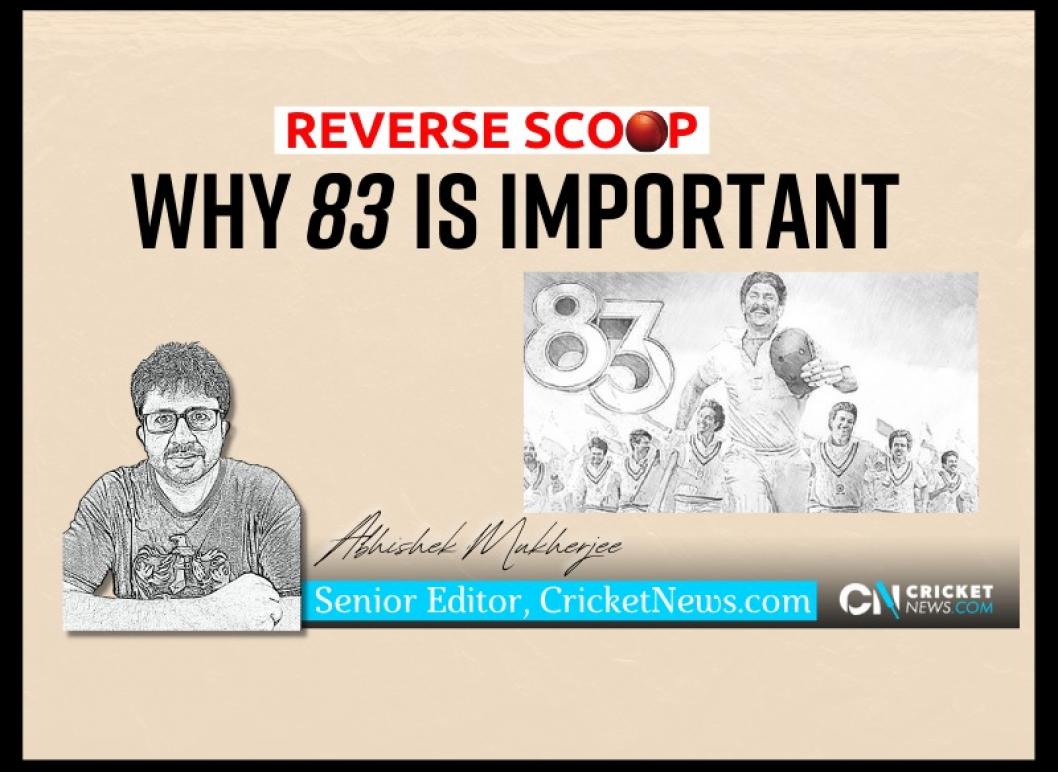 India does not make great movies on cricket. When they do, it is generally fiction, of which the finest examples are perhaps Lagaan, Iqbal, Kanaa, and Jersey. And then, there have been biopics, of Mohammad Azharuddin and M.S. Dhoni, and the upcoming ones on Mithali Raj and Jhulan Goswami.

What makes 83 unique is the premise, of arguably the greatest moment in the history of Indian cricket. India emerging out of nowhere, against all odds, to win a World Cup – after they had booked tickets for an early flight out of England – has to rank among the greatest stories of sporting history.

The movie makes honest efforts. The matches are played on the actual grounds, and the basic scorecards and events have been adhered to, albeit at times with unnecessary over-the-top exaggerations. The casting is reasonable. Despite the presence of a superstar in Ranveer Singh, efforts have been made to ensure every team member got reasonable roles.

There are factual errors (the mention of Tony Greig’s ‘grovel’ comment, for example, was erroneous, irrelevant, out of context, and perhaps even a tad insensitive), presumably in the garb of ‘creative liberty’. But then, there have been moments where makers have been honest in their efforts. They have retained delightful details like Jeff Dujon slapping the pitch in frustration immediately after getting out in the final.

The background score has been jarring, particularly during matches. And the sequences, often too overly dramatised. If that was to ensure commercial success, it has not worked – for the movie has failed at the box office.

It was, after all, extremely difficult to add to the saga of India’s 1983 win. The sequence of facts is fantastic enough to write itself without adding unnecessary drama. One does not – cannot, in fact – add to perfection, for the journey was truth beyond fiction to contemplate.

And yet, it was necessary to make the movie, for the current generation if not for old-timers.

India was a very different nation in 1983. Halfway through its fourth decade as an independent nation, India was still grappling with poverty, malnutrition, and illiteracy, among other problems. The economy did not open up until almost a decade later.

This was also an era when the BCCI had to pay Doordarshan to cover live cricket matches. It was far from being a rich board. Cricketers were paid little more than a pittance as daily allowance. They played domestic cricket, but the income from that was nowhere remotely close to guarantee post-retirement days.

Almost every leading cricketer – unless they came from a privileged family – had a day job. While in many cases that meant representing their organisation at cricket, that did not necessarily hold for everyone. And even then, the level of riches of the IPL era were unthinkable.

Tours were difficult. Cricketers often sought out expatriate Indian families, not only for a taste of food they missed, but also to save on the pittance they received. They often had to do their own laundry in the hotel bathtub after a gruelling day’s cricket to save up. Medical facilities were limited. Hospital treatment often had to be arranged by the touring parties. Accommodation was below par. Families were often not allowed on tours.

The average cricketer hailed from a middle-class family – but that was by Indian standards. Their lifestyle did not stack up against their contemporaries in England or Australia. And unlike the West Indians and Pakistanis, Indians did not feature regularly in the County Championship.

The Indian cricket team was accompanied by a one-man support staff, the manager. That one individual was often in charge of coach, health, treatment, logistics, hospitality, food, luggage, travel, tour finances, and more.

In other words, the Indian cricket team perhaps had to fight more intense battles off the field than on it.

That has changed so drastically that it is difficult to imagine the current Indian cricket team and BCCI as the same entities.

India’s 1983 win was unlike their wins in the 2007 World T20 or the 2011 World Cup, for the matches were only part of India’s fight. 83 does a reasonable job of portraying that, of telling later generations what it used to be like.

That one win triggered a process that changed everything for Indian cricket.

It is not a great movie. Despite its faults, however, it will remain an important movie, for to bask in the glory of the present, it is important to understand and acknowledge the past.