Reverse Scoop: Why not use venue-specific batters in Test cricket? 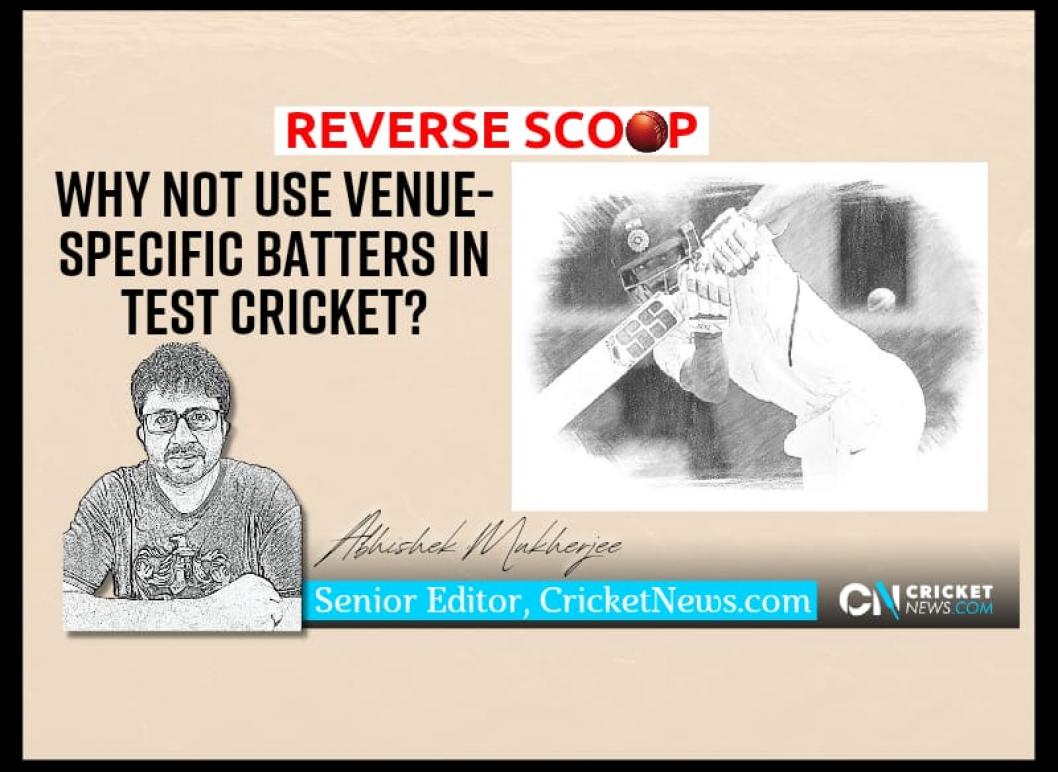 Between 1992/93 and 1997/98, Rajesh Chauhan played 21 Test matches, of which India won 12 and drew nine. The numbers may prompt someone to believe Chauhan was a ‘match-winner’ – despite its frequent usage, the tag means little in a team sport like cricket – until someone looks into his numbers.

But Chauhan, for all his talent, was not a great Test cricketer. From 21 matches, he picked up only 47 wickets, at 39.51 apiece. He was not outstanding with bat either, which makes one wonder why he got so many opportunities.

That happened because sixteen of Chauhan’s 21 Tests (37 wickets at 33.67) were on Indian soil. He was often one of three spinners India picked for pitches designed to assist spin. Away from home, he got 10 wickets at 61.10 from five Tests.

In other words, Chauhan was a ‘home-only’ option for India.

Fast forward to 2021. Just like Chauhan, debutant Axar Patel played three Test matches a home series against England. He demolished England with 27 wickets at 10.59. He has not played a Test match since then. If R. Ashwin and Ravindra Jadeja do not get injured, he is unlikely to get another call – unless it is as a third spinner.

And then, there are the fast bowlers.

Away numbers include the World Test Championship final on neutral venue.

Umesh has clearly been India’s fast bowler of choice while playing at home, because his numbers on Indian soil make excellent reading. Away from home, however, India prefer Ishant and Shami – and Bumrah, who has played only twice at home (one can ignore Siraj for the sample size). Their bowling averages indicate why.

In other words, India pick and choose bowlers – like most other teams – depending on the venue.

It is an accepted practice accepted without questions. But why not apply the same logic for batters?

In his three-year career, Hanuma Vihari has played 12 Test matches, but only one of them at home. That is largely due to the fact that India often play five specialist batters at home (overseas, too, at times), and the middle order invariably consists of Cheteshwar Pujara, Virat Kohli, and Ajinkya Rahane.

Vihari’s has been a case of being at the wrong place in the wrong time.

India had faced this problem even in the six-batter era, when Rahul Dravid, Sachin Tendulkar, Sourav Ganguly, and Mohammad Azharuddin occupied the middle-order slots. Most of V.V.S. Laxman’s early Test matches were spent as a makeshift opener. And soon after Laxman replaced Azhar in the middle order, India had to push Virender Sehwag to the top.

But there is no slot at the top for Vihari, either. Rohit Sharma, a makeshift opener himself, will open with K.L. Rahul, who got a break when Mayank Agarwal was concussed. Agarwal will be raring to break through, with Shubman Gill and Prithvi Shaw hot on his heels.

All of them can be used down the order as well.

The selectors, perhaps after taking stock of the situation, decided to send Vihari to South Africa with the India A squad. That tour, featuring three four-day matches, will start on 23 November, 24 days before India’s first Test match in the same country.

Vihari was left out of India’s home Test matches against New Zealand, to the surprise of many, but probably because he would not have featured anyway. However, if he does well, he may feature in the Test XI in South Africa, especially if India decide to play six batters.

Even then, once back home, he may not retain that spot as long as Pujara, Kohli, and Rahane all feature in the XI.

In other words, India may use Vihari only as an overseas batter.

Which makes one wonder, should sides with depth in their batting pool use specialist batters, not only for formats but also based on venues?

Pujara, for example, averages 47.28 in Australia and 58.81 in Asia, but below 32 in every other country. He can be considered an Australia-and-Asia-only option. Rahane, similarly, averages 42.09 in Australia but 26.03 in England, and so on…