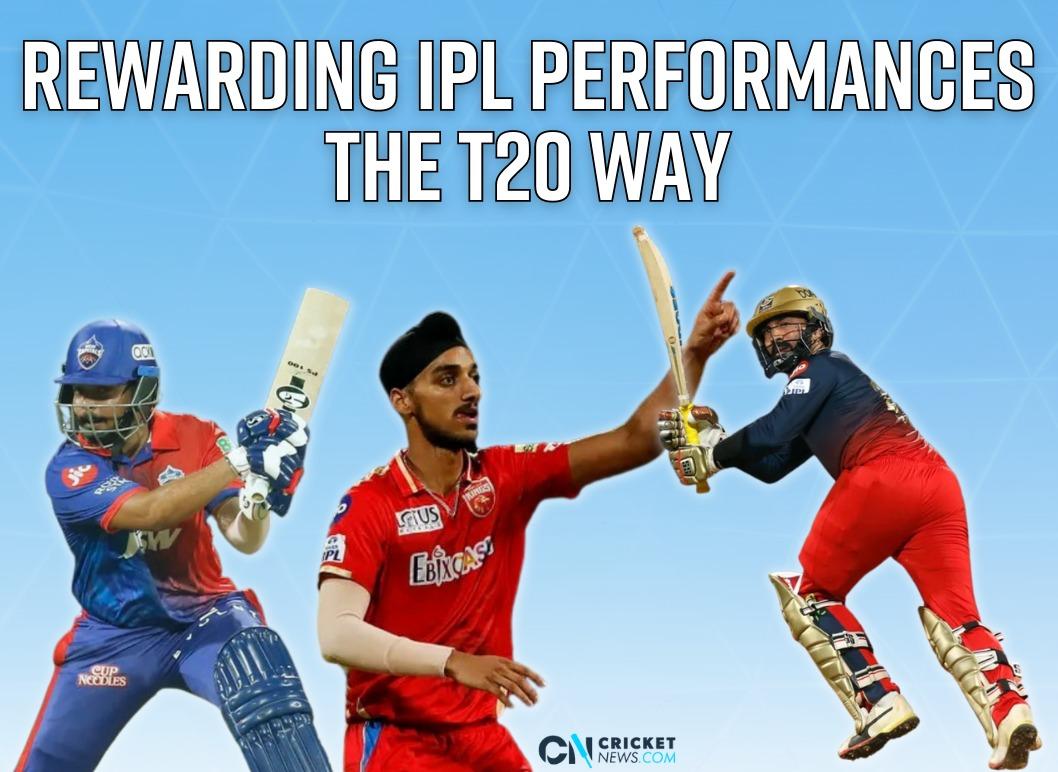 What's the best gift a set of good IPL performances can offer an Indian player? More IPL matches? Sensible. More individual awards? Fair. Heftier sums paid by their team, or another in the next auction? Until now, yes, but we don't know what direction the league is headed in terms of auctions. Even if it imitates a transfer market, one can assume their income will depend on their performance. And then there are brand endorsements, IP revenue, NFTs…

Given that cricket's annual calendar is still driven by the international game, it will not be an exaggeration to call the India cap the Holy Grail. And why not? The IPL has established itself as a shorter route for many players to that Indian dressing-room. T20 Internationals remain a constant presence.

All these factors only create space for more of the new talent to come in. Especially in the year of a *drum rolls* T20 World Cup. In the 1990s, Morgan Freeman might have advocated against hoping, but that does not seem to have had an impact on the aspiring Indian cricketer. One can take the India national cap as a realistic possibility, and perhaps, the biggest reward.

But what kind of performances can – or should – lead to the rewards? Most runs? Most wickets? The ten active Indian players to have won the Orange and Purple Caps have all represented India in the format after their rewards. The sole exception to this has been Sachin Tendulkar, who showed little interest in playing for India in the shortest format when he won the Orange Cap in the twilight of his career.

But should there be eyes on players who do not tick the two most usual boxes? Can a player not top the runs or wickets charts – parameters that are often determined by the number of matches their team played – and still be good at T20?

The principle of batting in T20 cricket is about squeezing the most runs out of every single ball. It is well documented in Freddie Wilde and Tim Wigmore's Cricket 2.0 that the first winner of the first professional T20 tournament, England's T20 Cup (Surrey), understood the crux of this back in 2003: ‘Lads, we're not going to worry much about ones and twos, we're just going to try and hit more sixes.’

The words of Surrey captain Adam Hollioake have aged well almost two decades later. The best batters in the format are the ones who clear the boundary more often than the others. But should the ones who do so most frequently be considered more effective than the others?

Take Dinesh Karthik. Until the game against Punjab Kings, he had scored 274 runs in 12 innings at a strike rate of exactly 200. This is a better rate than any batter who has scored more runs this year. Even after his 11-ball 11 last night, Karthik has the best strike rate (193) with a six-innings cut-off.

The hype around Kartik’s probable return to the India squad is not merely a social media fad. No other Indian cricketer has a scoring rate anywhere near him even in half the innings. The fact that he has batted the way he has at different positions (4, 6, and 7) makes his case even stronger.

In T20 cricket, a long innings may often indicate the lack of risks. In the modern game, with most teams boosting their batting line-ups, an opener's primary role should be to give their team a decisive Powerplay. This is what Shaw does better than any of his compatriots. It is only a matter of time Indian cricket starts embracing the Prithvi Shaw way of T20 opening.

Let us move to the bowling alley, where the job description is closer to the ODI. Save as many runs on every ball. A dot ball in most game situations is as good as a wicket.

International cricket showcases merely the cream of the products of India's fast-bowling revolution. For the other parts of the supply chain, one needs to look at the IPL. The list has been long; the applause, louder.

Let us start with the left-armers, a species hard to come by, at least for the Indian team. While T. Natarajan has impressed with 17 wickets in nine innings, he has hardly been at the centre of the spotlight. Mohsin Khan, a 23-year-old from Uttar Pradesh, has the best economy rate this season (5.19). Leading the Lucknow Super Giants attack, Mohsin has picked up 10 wickets in just six innings, including wickets of David Warner, Rishabh Pant, Rovman Powell, and Liam Livingstone.

Arshdeep Singh might have had only seven wickets in 12 innings, but was one of only two players Punjab retained ahead of this season. Over the season, he has demonstrated why Punjab had faith in him. With an economy of just over eight in the final five overs of the innings, he has the most miserly among those who have bowled two overs in that phase. He has also conceded boundaries less frequently than anyone in the phase. He seems to have aced the niche art of closing games with the ball. That India cap should not have to wait for long.

Arshdeep Singh has only gotten better and better with time 👏#IPL2022 #CricketTwitter pic.twitter.com/Nk3Xg22mOP

The most senior wolf in the Indian Test match pace pack has had quite the white-ball season. With a 40-over cut-off, Umesh Yadav (51.25%) is the only Indian fast bowler to have had a dot-ball percentage of over 50 per cent. Eight of his 15 wickets have come in the Powerplay, the third-most in the league. The Kolkata Knight Riders attack has seemed lost without him.

Economical spells are quintessential ingredients to a team's success in this format, even if they do not fetch wickets. It is about time the 'best T20 league in the world' rewards beyond the two caps. It is about time the Karthiks, the Shaws, the Arshdeeps, among others, are rewarded for what they offer. If they are not, they may alter their game to resemble those who are.