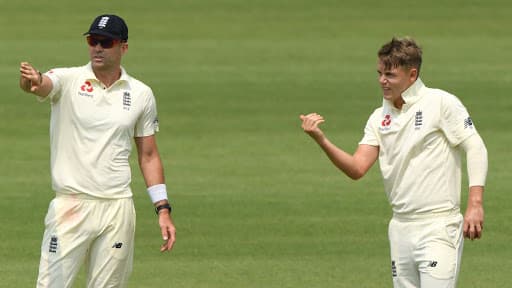 England’s young left-arm pacer Sam Curran stated that James Anderson proved he is still world class with his performance on day one of the second Test against Pakistan.

Anderson picked up two wickets in 15 overs on a rain-hit day and was nearly unplayable with the ball swinging around on a fresh pitch. Earlier in the week, the veteran England pacer had denied retirement rumours after a few ordinary outings against West Indies and Pakistan.

“I was pretty shocked with the stuff that was going on about him. He is a world-class bowler and anyone who doubts him I don’t think is very sensible,” Curran said.

“He proved how world-class he is and I am sure he will go on and get a five-for and creep up to 600, which is really exciting for all of us.

“I am enjoying having him around and learning from him. He helped me through my spells and picking his brains is great for me.”

Curran had a decent day himself dismissing Pakistan’s set opening batsman, Abid Ali by forcing an edge to the cordon.

“Anytime you put on an England shirt or a Surrey shirt you try and do your best. It is great to be back in the side and contributing again,” Curran said.

“It is is very strange times and a tricky situation when you don’t play – you don’t get to play for your county when you are not selected. If you don’t get selected, you’re back to your hotel room. Things like that are very difficult. Of

“It’s the new normal so we have to get on with it and keep training hard. I feel for the guys who aren’t playing. We have such a great squad and the boys are lifting the ones that aren’t playing and keeping them involved.”