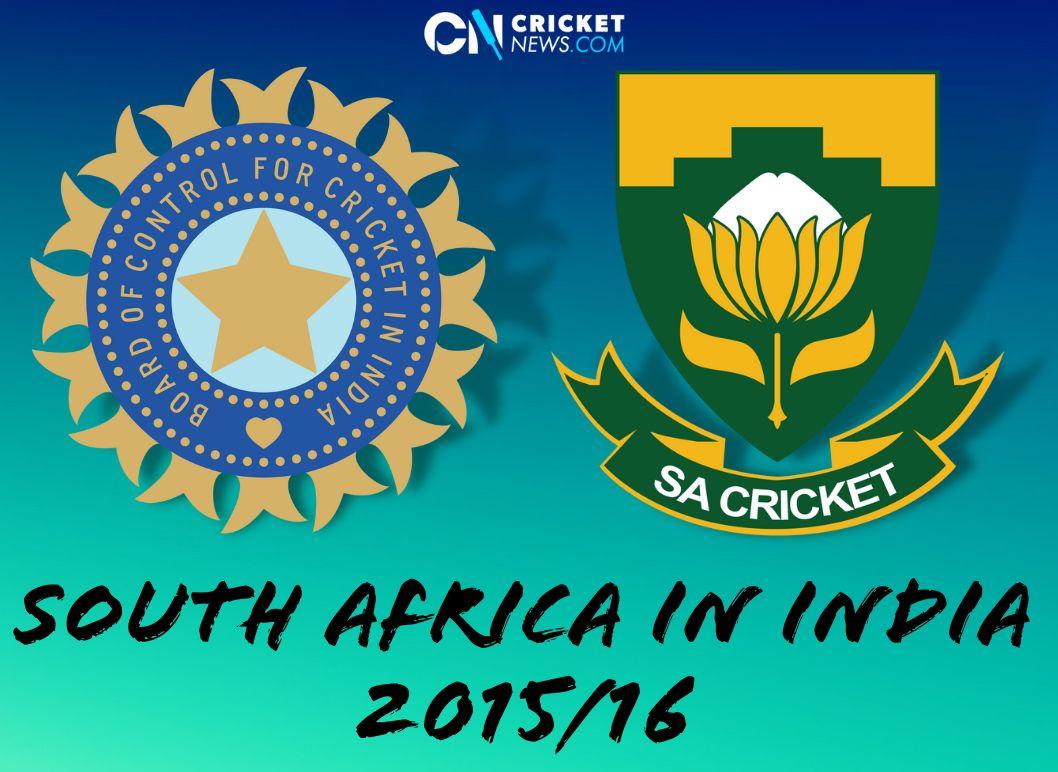 South Africa came to India in 2015 for three T20Is, five ODIs, and four Test matches, making it the longest Test series between the sides in India till date. Given their long, shared history, the boards decided to name the Test series after Mahatma Gandhi and Nelson Mandela, and announced the Freedom Trophy for the winning side.

South Africa named significantly different teams for the three formats, with Faf du Plessis leading in the T20Is, A.B. de Villiers in the ODIs and Hashim Amla in the Test matches. They won the T20Is 2-0 and the ODIs 3-2. De Villiers scored three hundreds in the ODIs, Quinton de Kock two and du Plessis one. The highlight came in the last ODI, where all three slammed hundreds – for only the second time in ODI history – to take South Africa to 438/4 and win by 214 runs.

But things changed in the Test series. South Africa’s highest total across seven innings was 214, which was the only time they reached 200 in the series. The Indian spinners were all over them. R. Ashwin and Ravindra Jadeja shared 54 of the 70 wickets to fall, with de Villiers being the only South African player to score a fifty-plus score in that series.

To be fair, the Indians were also not comfortable either. In the last Test, Ajinkya Rahane became only the fifth Indian to score two hundreds in the same Test match. But barring that, there were only four other fifties by the Indians.

South Africa began the series brightly in Mohali, bowling out India for just 201 in 68 overs on Day 1, of which M. Vijay alone got 75. Dean Elgar picked up four wickets with his occasional left-arm spin. South Africa ended were bowled out for 184 the next day, de Villiers top-scoring with 63. Ashwin picked up 5-51, Jadeja 3-55, and Amit Mishra 2-35.

Cheteshwar Pujara scored 77 and Vijay 47 in the second innings, but from 161/2, India collapsed to 200 as Imran Tahir and Simon Harmer picked up four wickets each. However, chasing 218 on a rapidly deteriorating pitch, South Africa were bowled out for 109 inside 40 overs, Ashwin taking five wickets and Jadeja three. The match got over inside three days.

The next Test match, in Bengaluru, was de Villiers’ 100th, and he got 85 to take South Africa to 214, their highest total in the series. Ashwin and Jadeja picked up four wickets each. Shikhar Dhawan and Vijay took India to 80/0 by stumps, but continuous rain and a wet pitch forced to abandon play for the remaining four days.

India won the toss in Nagpur and scored 215 in 78.2 overs. Vijay top-scored again, with 40, as Harmer picked up four wickets and Morne Morkel three. South Africa, 11/2 by stumps, crashed to 12/5 within half an hour on Day 2, and were eventually bowled out for 79, their lowest total against India. The innings lasted for just 33.1 overs with Ashwin and Jadeja picking up five and four wickets respectively.

Indian then got 173, with Tahir picking up five wickets and Morkel three. Chasing 310, the South Africans were all out for 185 against Ashwin (7-66), Amla and du Plessis contributing 39 each. Like the first Test match, this, too, ended inside three days.

The teams then travelled to Delhi, where India posted a total of note for the first time in the series. Rahane’s first ever Test century at home helped them to reach 334 as Kyle Abbott took five wickets and Dane Piedt four. South Africa again had a familiar collapse to be bowled out for 121 in 49.3 overs. De Villiers top-scored with 42 as Jadeja took five wickets.

Rahane then got his second century of the match, and Virat Kohli supported him with 88. They added 154, and the match went to the fourth day for the first time in the series. South Africa, up against a target of 481, opted to bat out over 160 overs. They lost Elgar early, but Temba Bavuma and Amla stayed put for 38.4 overs. Bavuma got 34 before becoming Ashwin’s second victim.

Amla and de Villiers then took it on themselves, and South Africa ended the day on 72/2 in 72 overs. They were even more watchful on Day 5, scoring just four runs in 12 overs before Amla's 244-ball innings came to an end, against Jadeja.

De Villiers was still there, but wickets fell at the other end. South Africa went to tea on 136/5. Then, immediately after tea, Umesh Yadav dismissed Dane Vilas. Ashwin then ended de Villiers' six-hour vigil, and ran through the tail. South Africa posted 143 in 143.1 overs, the second lowest run rate in completed innings in Test history.

With 31 wickets and a fifty, Ashwin won the Player of the Series award, while Jadeja took 23 wickets. For South Africa, Imran Tahir had 14 wickets and Harmer 10.