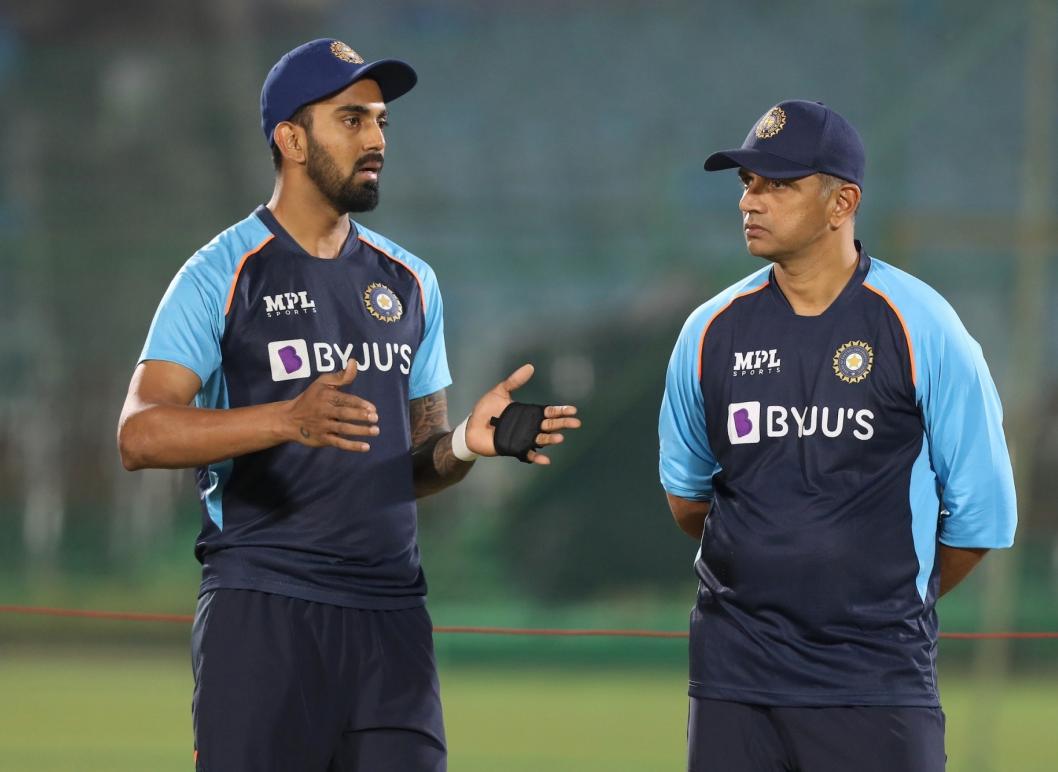 Whenever the future of ODIs is brought under the microscopic lens, it springs up with delight. Even the dead-rubber third ODI turned out to be a nail-biter in both dressing-rooms as well as for the fans.

Rahul Dravid and Mark Boucher are men not known for expressing enough. They maintained stoic looks, though the tension was apparent on their faces as the Newlands ODI came to its closure. As athletes, they had faced each other many a time, but here as coaches and managers of men, they had little to control.

Boucher's days as the South African head coach may be numbered due to the charges levelled against him. But as of now, he returned triumphant against his much-celebrated Indian counterpart.

The dying moments of the Cape Town ODI transported me to a spring day in 2000, when a 23-year-old Boucher defeated Sourav Ganguly's ploy with Dravid.

March 2000, Faridabad. After Ganguly took charge of the Indian captaincy, India's fortunes seemed to have changed. After being whitewashed by South Africa in the home Test matches under Sachin Tendulkar, they found themselves 2-0 up against Hansie Cronje's strong unit in the ODIs.

Ganguly and his deputy Dravid slammed contrasting fifties to help India to 248 in the third ODI. South Africa were penalised an over for slow over rate. Gary Kirsten and Cronje had set the platform for chase. South Africa required less than run a ball off the final two overs, and Ganguly had choices in Ajit Agarkar (8-0-36-0), T. Kumaran (5-0-31-0) and himself (3-0-16-0). But he trusted Dravid's off-spin in the penultimate over.

At best a part-time wicketkeeper, Dravid was far from being any sort of a bowling option. He did clean up Shaun Pollock and applied some pressure with dots. Boucher, who was batting at No. 9 (yes, the same position as Jasprit Bumrah, India's last penultimate wicket to fall on Sunday), pulled Dravid's last ball for a six to finish the match.

From Ganguly's immense trust in Dravid to Boucher having the last laugh to the days when India would snatch defeats from the jaws of wins to the tumultuous phase of Indian and South African cricket, the just-concluded India tour of South Africa did bring plenty of memories of the gone-by days, especially the Faridabad game.

It is apparent that not all is well in Indian cricket, which currently lies sandwiched between the egos of Ganguly, now BCCI President, and former captain Virat Kohli. Winning is often the surest way out from the controversies, but heading into the last week of the first month of 2022, India are yet to win a game this year. After losing the two Test matches, India lost the ODIs 0-3 against a rebuilding South African side that Indians were expected to beat.

At the helm are two Rahuls from Karnataka, who could have done things a lot differently to maximise India's chances.

The most subjective terms in cricket are 'good' or 'bad' captains. Results are one way to measure success, but to term a strategic off-field or on-field decision 'good' or 'bad' depends on other variables.

India would have been one up, had one of Kohli and Shikhar Dhawan carried on in the first ODI. Had Rishabh Pant not missed the stumping of Quinton de Kock off R. Ashwin in the Powerplay of the second match, Rahul's call to bowl Ashwin with the new ball would have been termed a stroke of genius. And then at Newlands, all Deepak Chahar needed to do was run singles after the fabulous knock from him got India near the finishing line.

Rahul, the captain, is work in progress. Yes, Temba Bavuma outshone him in managing resources and handling the off-field crisis. More importantly, the honesty with which he operates has impressed all.

'I hate to bring this up, but it's been a challenging period for the team, for the players, for particular members of management. There's been a lot of scrutiny surrounding the team and surrounding the organisation, so to manage the conversations happening around the change-room and to ensure our energy is 100% geared towards performing out there, for me, has been the biggest challenge. It has been a big responsibility but has also been a privilege. But it's not easy,' Bavuma said after the series.

But it is still too early to conclude on Rahul. It is not the easiest time in Indian cricket. Until a few weeks ago, Rahul did not even know that he would lead India in ODIs and Test cricket.

Then there are talks of the diminishing intensity and passion that Kohli brought as captain. But then, that held for M.S. Dhoni, who had his own ways to find success. Not too long ago, the same Kohli got often criticised for the in-your-face attitude and was labelled an uncouth Delhiite. Now another bunch finds it a problem when he does not use a cuss word when dismissed for a duck. 'Is Kohli disinterested?' that becomes the raging question.

Anyway, let us return to the Rahuls. What could have the captain and coach done differently?

For starters, they need to be honest about India's glaring errors in not distinguishing between the two white-ball formats. Dravid took the first step when he called South Africa defeats 'an eye-opener'.

The demands of ODIs and T20Is are vastly different. In 2019, the then head coach Ravi Shastri stated that they were treating the T20Is before the ODI World Cup as a preparatory ground. With Rahul opening the batting in the series, their focus seemed more on this year's T20 World Cup than next year's World Cup.

Over the past two years, Rahul has established himself in the middle order, averaging at almost 70 at a strike rate touching 110. In a setup that is spoilt for choices when it comes to openers, why will Rahul get back to opening, a role that he dons for the Test and T20I sides?

Once Rohit Sharma returns, he will unite with Dhawan at the top. India's woes were in the middle-order, and Rahul's move to the top weakened it. Returning to the opening slot in ODIs after 25 months, he finished with 76 runs at 25.3, striking at less than 72.

Rewind to March 2021, when India played a strong England unit at home. The roles played by Rahul, the Pandya brothers, and Pant in the middle-order played a significant role in the series win.

Suryakumar Yadav debuted in Sri Lanka and walked away with the Player of the Series award. Even with the spread field, he has the natural ability to improvise, and thus finds more boundary options than most, as he did in Cape Town. It made little sense to bench him in the first two matches. If Shreyas Iyer was not batting in the top four, there is a question mark over his place in the side.

The series also saw India trying Venkatesh Iyer as a backup for Hardik Pandya. To boost his selection chances in the top-heavy Indian unit, he moved to a middle-order spot for Madhya Pradesh in the Vijay Hazare Trophy and slammed two hundreds. He finished the tournament with an average of 63 and a strike rate of 134.

He did not bowl in the first ODI despite the long partnership between Bavuma and Rassie van der Dussen. If he was not going to bowl, why pick him ahead of Suryakumar?

Venkatesh is primarily an opener, and could have played at the familiar spot, maximising the Powerplay with his strike rate. Rahul moving down the order would have lent the much-needed strength lacking in the middle-order.

In the final ODI, India returned to the five-bowler ploy. Venkatesh bore the axe after failing in his first two ODIs. The policy still had the room to try out another new batter in Ruturaj Gaikwad, who has been in sublime form since the second leg of the IPL. After bagging the Orange Cap in the IPL, he topped the run charts in the Vijay Hazare Trophy, slamming four centuries in five matches and amassing 603 runs at almost 151.

One can only hope that Gaikwad will not face the fate of Prithvi Shaw, who broke all sorts of records in the 2020/21 Vijay Hazare Trophy and excelled in the ODIs in Sri Lanka, only to find himself dropped for the South Africa tour.

India's bowling plans were not up to the mark as well. Since 2020, Jasprit Bumrah averages 213 in Powerplay, getting a solitary wicket at a strike rate of 68.4. With Bumrah failing to penetrate line-ups in the Powerplay for a long time, he could have bowled shorter spells throughout the match, focusing mainly on the slog overs.

In the first two ODIs, India had three right-arm seamers – Bhuvneshwar Kumar, Shardul Thakur and Venkatesh – none of whom could be branded as fast. The lack of variety compounded woes. They had extra pace, and hence better wicket-taking options, in Prasidh Krishna and Mohammed Siraj, both of them strike every 26 balls in List A cricket. In the final ODI, the above theory was further proven when Krishna returned with three wickets.

The absence of Ravindra Jadeja and Hardik did play a role in terms of balance. Not having batters who can bowl is another looming issue since Kedar Jadhav. In the final game, Shreyas bowled off spin to left-handers and leg spin to right-handers, but with little control. However, he can work on his bowling to boost his selection chances.

Thakur and Chahar demonstrated their all-round abilities. While that is refreshing for a line-up lacking batting depth, the question lies in whether they can be relied on as the first-choice bowlers. While excellent in T20, they have not quite set the stage on fire with ball in their handful of ODI appearances.

That brings us to Bhuvneshwar, who is being written off by most critics. Less than a year ago, he played a significant role in India's ODI and T20I series wins over a strong England side. But here, his form compounded India's woes. Added to it was Yuzvendra Chahal and Ashwin's insipid show, which was in stark contrast to what the South African spinners did, especially on the slow Paarl tracks.

While India's new Test captain is yet to be announced, Dravid will undoubtedly remain the head coach across formats for a while. With three world championships (2022 T20 World Cup, 2023 World Test Championship and 2023 World Cup) to be played until the end of 2023, Dravid will have to prepare a distinctive blueprint for each format.

In South Africa, it was not about the lack of resources but about using them more appropriately. One poor tour does not undo fantastic achievements of recent past. But while there is no dearth of resources in Indian cricket, it is important to plan, allocate them to suitable buckets and use them optimally.

And that is the task lying ahead of Dravid & co.