South Africa vs India 2006/07: A disappointing tour for India with cherished memories at galore 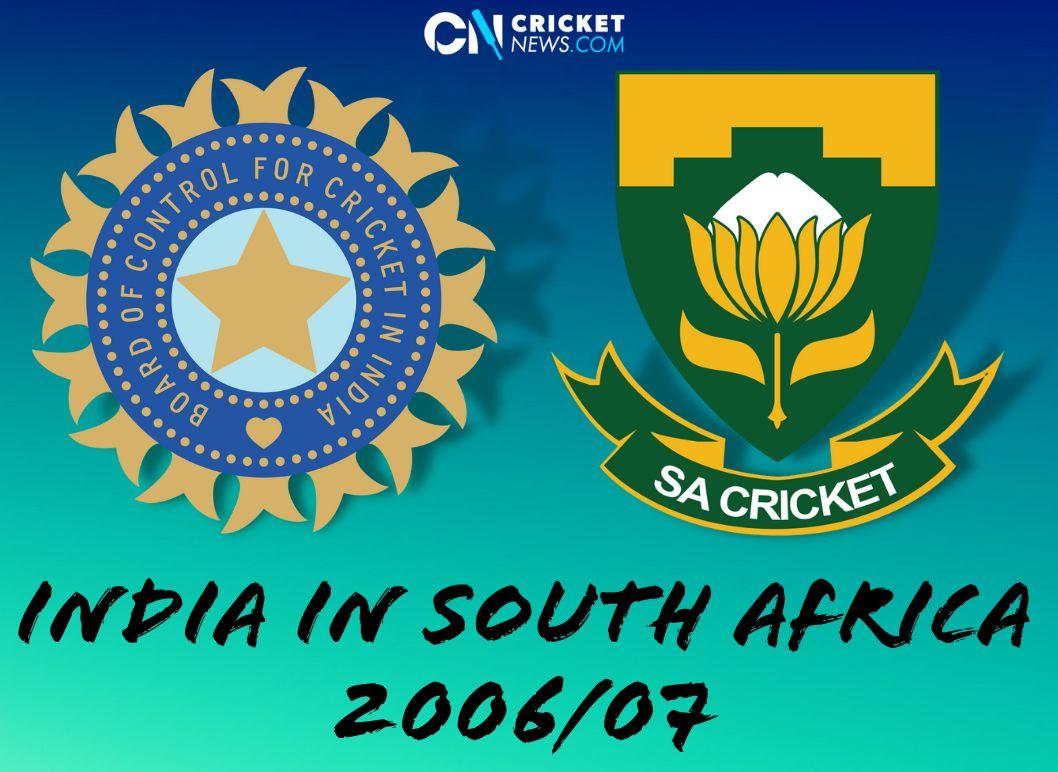 India's tour of South Africa 2006/07 went on to be memorable for several reasons. The teams contested in four ODIs, a T20I and a three-match Test series.

Those weren't the happiest of times for Indian cricket. Several players publicly expressed their displeasure about coach Greg Chappell, whose feedback played a role in the Sourav Ganguly's axing from captaincy and subsequently from the side, after 2005/06 tour of Pakistan.

In terms of results and achieving newer heights, Chappell's tenure began on a promising note, particularly in the ODIs and witnessed the rise of M.S. Dhoni as a force. India also started winning ODIs while chasing.

As 2006 progressed, the wins dwindled. With less than a year to go for the ODI World Cup, the West Indies tour was important. India lost to West Indies 1-4, failed to qualify for the final in the tri-series in Malaysia and did not progress beyond the group stage in the Champions Trophy at home.

South Africa was going to be a challenge. Citing the dearth of 'exceptional talent' in domestic cricket, the selection committee, led by Dilip Vengsarkar, opted for experience over experiments. Veteran Anil Kumble and Zaheer Khan (who had been exceptional for Worcestershire) were added to the ODI squad. But still, there was no place for Ganguly and V.V.S. Laxman.

Meanwhile, Wasim Jaffer, yet to play ODIs until then, made the cut ahead of the promising youngsters like Gautam Gambhir and Robin Uthappa. The selectors believed that Jaffer's technique would help him excel in bouncy conditions.

Even before the ODI series started, Indians were pushed to the back foot in the tour game at Benoni. Dale Steyn's five-for sealed it for the Rest of South Africa, which became India's order in the matches to follow.

The first ODI at Johannesburg was a washout. Jacques Kallis scored a hundred in the second match at Durban and also picked three wickets to power South Africa to a 157-run win. India were bowled out for 91 in a chase of 249.

By now, Zaheer had renewed his rivalry with South African captain Graeme Smith, troubling him almost at will. After dismissing him leg before in Durban, Zaheer cleaned up Smith in the third ODI at Cape Town for a second-ball duck. Two balls later, he got Kallis too.

India had the hosts on the mat at 76/6 in the 20th over before the South African all-rounders stood to their reputation.

In the fourth ODI, in Port Elizabeth, Smith fell to Zaheer again, while S. Sreesanth got Loots Bosman, both for ducks. But South Africa found an unlikely middle-order hero in Herschelle Gibbs (93*), who powered them to 243. India completed their hat-trick of failed chases and got bowled out for 163.

Two days later, India returned to Johannesburg to play their first-ever T20I, a format they did not care for much back then, but one that spins money for BCCI. India had no T20 domestic tournament, and most players had no experience in the format.

It made sense that India brought Dinesh Mongia, the first Indian to play T20 cricket and a man with some experience in the the format, from his stint in the English county circuit.

With Rahul Dravid being ruled out of the rest of the white-ball matches, Virender Sehwag became India's first T20I captain.

South Africa elected to bat again. Zaheer's 2-15 included the routine wicket of Smith. South Africa managed 126, and made India work hard in the chase. Sehwag (34 off 29) early blitz gave India the platform, Mongia (38) brought his experience to good effect to top score, while the fraternity witnessed a glimpse of Dinesh Karthik's finishing skills as he completed a penultimate-ball win.

They restricted South Africa to 126/9 and won with 1 ball to spare.

In less than a year they won the inaugural (to quote Ravi Shastri) World TT.

In less than another year they changed the geography and economics of cricket. pic.twitter.com/zBFntUJWEY

After three thrashings in the ODIs, India had their moment in an alien format. Dhoni, who got a two-ball duck in the game, would lead India to glory in the inaugural T20 World Cup at the same venue less than a year later.

The teams travelled to Centurion for the final ODI. India finally batted first and struggled to 200, but South Africa completed the 4-0 whitewash with a nine-wicket win. They found a new hero in A.B. de Villiers, who blasted an unbeaten 98-ball 92.

Yuvraj Singh's knee injury had ruled him out of the three-Test series. Ganguly had done little in First-Class cricket in the interim period to merit a national comeback, but with him, it was not about performance.

Ganguly's selection had been discussed in the Indian parliament as well. Sharad Pawar, then BCCI chief, had met Vengsarkar before the selection committee meeting commenced for the Test series.

Ganguly had just led Bengal to a win over Punjab, the opening game of their memorable 2006/07 Ranji Trophy campaign. He had scored 6 and 43 and claimed five wickets in the low-scoring thriller.

The selectors named him in the squad, citing the team's poor batting in white-ball cricket, and citing his experience in South African conditions. In another major development, Laxman replaced Sehwag as vice-captain.

India beat Rest of South Africa in the three-day tour match, Ganguly stroking a fluent 83. Questions were also raised on Irfan Pathan's place in the Test squad over his bowling form. He picked just one wicket, but got a hundred and forty not out in the match. Even a Player of the Match performance could not help him find a place in the XI for the first Test.

Dravid returned to lead in the first Test, in Johannesburg. With the start delayed by an hour and a half due to a damp wicket, Dravid made a very bold move to bat first, which almost backfired.

On a spicy surface, against an attack comprising of Pollock, Steyn, Kallis, Makhaya Ntini and Andre Nel, India lost half their side by 156 at the end of Day 1.

The 71-run stand between Dravid and Sachin Tendulkar on the first day was worth more than the many three-figure stands they had stitched against the red ball. The surface required skill, determination and grit, which Ganguly also exhibited on his Test return. He top-scored with an unbeaten 51. A late blitz by No. 11 V.R.V. Singh (29 off 19) helped India to 249, a score that mirrored 400 on that track.

Sreesanth then took over, bowling with a straight seam, moving the ball at will. The South African pacers focused on bounce, and in contrast, Sreesanth got it straight, full and relied on seam movement to claim 5/40, bundling out the star-studded South African line-up for 84.

That fantastic spell apart, Sreesanth provided another much-cherished moment. Fed up with Nel's verbal volleys, he smacked Nel for a six and broke into an impromptu dance/riding-horse gesture.

Sreesanth opens up on his verbal spat with Andre Nel and his iconic celebration after hitting him for a 6️⃣ in the first Test of India's Tour of 🇿🇦 in 2006 🏇#India #SouthAfrica #SAvIND pic.twitter.com/1pKV7rIx2R

Though the wicket did ease out in the second innings, it still needed skills to master it. Laxman's 73 helped India set a target of 402. Ashwell Prince (97) kept South Africa in the hunt, but Zaheer, Sreesanth and Kumble picked three wickets each to bowl out South Africa for 278.

India registered their first-ever Test victory in South Africa, and Chappell could not stop lauding Ganguly on his comeback, famously remarking that the southpaw was a different batter and had a lot to offer to Indian cricket.

Ganguly continued to star for the Indians in the tour game against KwaZulu-Natal Invitation XI, but the tables turned in the Boxing Day Test match. Prince bettered his Wanderers effort to score a hundred. South Africa got 328. India responded with 240, courtesy half-centuries from Laxman and Tendulkar.

South Africa had a fruitful second innings, with captain Smith and Pollock getting fifties. Chasing 354, India were bundled out for 179, Ntini picking five wickets.

India roared back on a batting-friendly surface at Cape Town in the New Year's Test. Jaffer (116) and Karthik (63) added 153 for the first wicket. Tendulkar got a patient 64, Sehwag an attacking 40 at No.7, and batting with the tail, Ganguly breezed to a 75-ball 66 to help India to 414.

Smith's 94 and fifties from Hashim Amla, Kallis and Mark Boucher got South Africa 373, before Steyn, playing his first Test of the series, got the hosts back in the contest with a four-wicket haul.

An unusual scenario took place in India's second innings. Since Tendulkar had spent 18 minutes off the field on Day 3, he was not allowed to bat at No. 4 when India lost two wickets in the first 12 minutes. The usual No. 5 Laxman was in the toilet, and Ganguly was not even dressed in whites. Umpire Daryl Harper explained the situation to Smith to prevent a timed out appeal. Ganguly rushed to bat after seven minutes and got 46.

The South Africans were partly allowed to crawl back into the contest through unnecessary dropping of shutters from Dravid (47 off 134) and Tendulkar (14 off 62). India's 169 was not enough, as South Africa chased down 211 in the final session of the fifth day, with five wickets in hand.

Zaheer bowled his heart out, claiming four of the five wickets to fall. He got Smith again, but not before he had scored his second fifty of the Test that sealed the fate of the series.

With two series lost, their first-ever T20I won and their first Test win in South Africa, India returned home with mixed memories, some of them quite cherished.