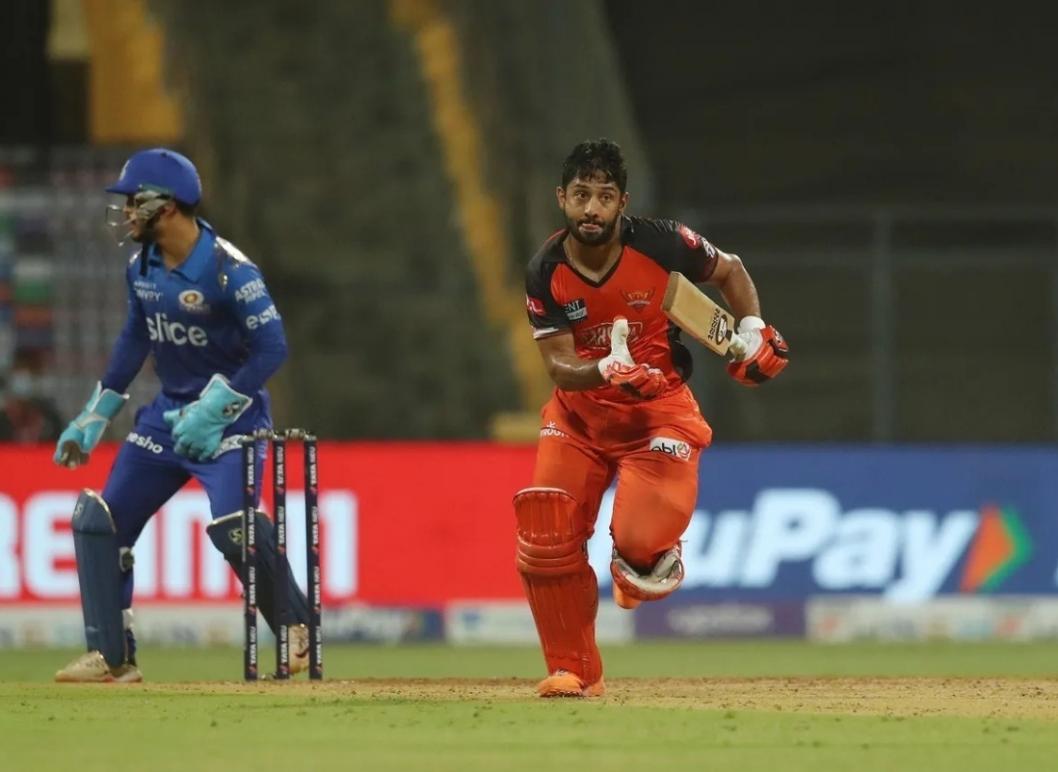 Sunrisers Hyderabad pulled off a heist to beat Mumbai Indians by three runs. This was Mumbai's 10th defeat of the season, and they will find it difficult to avoid a last-place finish. Hyderabad, on the other hand, broke their 5-match losing streak. Despite being in the eighth place, they still have a mathematical chance of qualifying for the playoffs thanks to their 3-run win.

Mumbai decided to experiment for this "dead rubber" contest. Rohit Sharma won the toss and decided to bowl as Mumbai brought in Sanjay Yadav and Mayank Markande for Kumar Kartikeya and Hrithik Shokeen, while Hyderabad got Priyam Garg and Fazalhaq Farooqi for Shashank Singh and Marco Jansen.

Garg opened with Abhishek Sharma as Williamson decided to move down the order. Hyderabad lost Abhishek for nine in the third over, when as he mistimed one off Daniel Sams. However, the in-form Rahul Tripathi smashed 23 off the first 12 balls he faced, including 6, 4, 4 off three consecutive balls from off Jasprit Bumrah. Garg, meanwhile, was dropped on 10 following a miscommunication between Sanjay and Bumrah.

Garg and Tripathi added 78 in seven overs before Ramandeep Singh broke through with his medium pace. Ramandeep picked up two more wickets. With 3-20, he was Mumbai's bowler of the night. Tripathi blazed away to a 44-ball 76, playing his shots all around the ground. With him at the crease, Sunrisers were scoring at more than 10 an over, and 200 seemed possible.

However, Ramandeep dismissed both Tripathi and Aiden Markram in the 18th over. Williamson eventually came out to bat at six, and he and Washington Sundar could take the score only to 193/6 as Bumrah bowled an excellent final over.

For Once, Mumbai Indians had a great start, with both Rohit and Ishan Kishan starting confidently. They played the first couple of overs cautiously, but once set, both played their shots at regular intervals. Rohit hit four sixes and a four during his 48-run stay whereas Kishan hit five fours and a six in his 43.

Mumbai lost their first wicket on 95 when Sundar got Rohit. Umran Malik then dismissed Kishan, Tilak Verma and Daniel Sams in his next two overs; he finished with 3-23 in his three overs.

Mumbai needed 67 in five overs, and their hopes rested on Tim David. At this point, David provided a breathtaking display of power hitting and raced to 46 with three fours and four sixes. One of his sixes went 114 metres, the second-longest in this tournament. He hit all four sixes off T. Natarajan, in the 18th over, but Natarajan had his revenge with the last ball, running out David when the latter tried to retains trike off the last ball.

Bhuvneshwar Kumar then bowled a wicket-maiden in the 19th over. Ramandeep Singh tried his best in the last over, but it was not enough to save Mumbai.