The sweet-toothed Indian Lara who joined Laker and Kumble 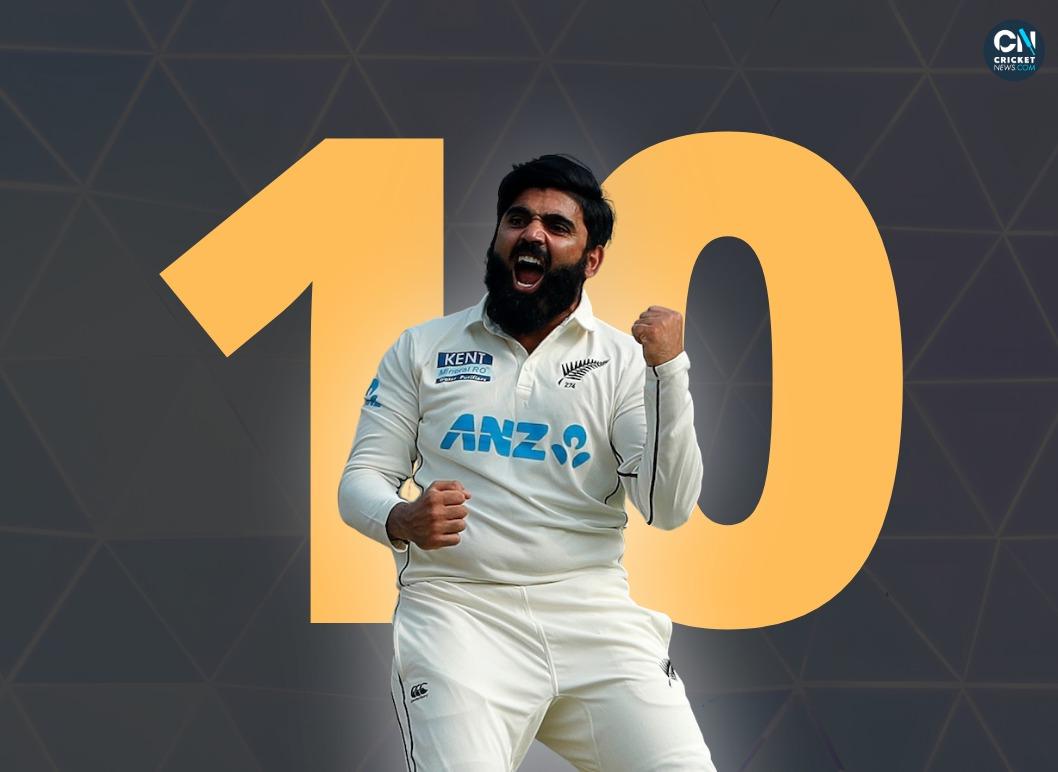 ‘He’s definitely got a sweet tooth, that young boy looking for chocolates certainly exists today,’ says Lance Hamilton as he chuckles while talking about Ajaz Patel.

You know Ajaz Patel, of course. The latest member of an elusive bowling club in Test cricket history.

Hamilton, now the High Performance Manager at Central Districts Cricket Association (CDCA), has spent the last 12 seasons working closely with Ajaz, watching him grow into the cricketer and the person that he is today.

Of all the things he tells Cricketnews about Ajaz, a penchant for chocolates is perhaps the only relatable thing.

‘He works incredibly hard on keeping in shape, and fielding side of the things.’

Lance has lost us here.

There are no second thoughts to this for anyone who saw the second India-New Zealand Test match. Over the course of three days, Ajaz bowled 443 balls, the most by anyone in the Test. And yet, you would notice the same intensity when it came to chasing the ball and saving runs on the field.

What about his batting?

‘He's officially known to the boys with regards to his batting as the Indian Lara, and he does refer to himself in that way as well,’ Lance smiles. He adds that it might embarrass Ajaz if he were to find out that he has told us the same.

‘He loves every opportunity to bat in the nets. The batters are like, “Can you get out now, so that we can have our turn?”'

There is also a mention of how Ajaz will fight the fight to get up the order, and always be around the coach, wanting to get to bat as higher up the order as he can.

Will Somerville was sent in to bat as nightwatch on Day 4 in Kanpur, but one cannot bet against Ajaz not having volunteered for the same. That would allow him to bat higher up the order. He loves that.

But the story of Ajaz is not just about him. He would not want it to be.

Being a humble practitioner of his religion, he is a teetotaler. But when it comes to his Central Stags teammates going out for a drink, he is the first to put his hands up and drive them to the van or the bus, the first to sign for rental cars when the team is outside, the first to drive.

He loves to drive.

‘It’s been great to see him become a father,’ Lance shares. ‘I know he absolutely dotes on his baby daughter. Parenthood has almost taken some pressure off of him. Cricket becomes more of a game again that you play for fun. It doesn’t matter whether you go for a duck or pick a 10-fer, your kids are always happy to see you.’

Though Lance has worked at different management roles at CDCA, he vividly remembers his first impression of Ajaz when the latter arrived from Auckland.

‘Man, he had so many questions.’

This is not too different from what Heinrich Malan, the former Central District Stags coach who has worked with the New Zealand side in multiple stints, thinks: ‘He was always so inquisitive. Always asking questions on how to bowl to different batters under different conditions, during different times in the game, and then working really hard in the preparation for it.’

Hard work is a phrase that features heavily in the Ajaz Patel story. He had played in a few First-class games before Heinrich arrived in 2013, but was not yet a regular.

After 1st #INDvsNZ Test:@HeinrichMalan: "(Ajaz Patel and William Sommerville) have barely played any cricket this summer. They were both in Auckland lockdown." @ovshake42: "He is a better bowler than what we saw."

On New Zealand's player of the day and their bowling luxury: pic.twitter.com/HO9tQBRWaQ

The transition from being a pacer during his Under-19 days to then a spinner did not happen overnight. Ajaz got in touch with former New Zealand right-arm off-spinner Dipak Patel, someone who knew a thing or two about turning the ball.

In his early days with the Stags, Ajaz would often be in the company of Tarun Nethula, another spin featurette in the squad. Together, the two would strategise for hours, even challenging each other.

‘There have been times when I was in Auckland and he was in Napier, and he’d get in touch with me over video call,’ recalls Heinrich with the glow of a proud teacher.

The Stags squad boasted of several international pacers, in Adam Milne, Doug Bracewell, and Ben Wheeler. As a spinner, Ajaz had to ensure that he performed at every opportunity.

Four seasons in, he picked the most wickets in the 2015/16 Plunket Shield, New Zealand's First-class domestic competition. He would go on to do that three years in a row before making his Test debut for New Zealand in 2018.

‘One of the things that I respect about him the most is how hard he’s had to work to earn chances, nothing has been handed to him,’ says Lance.

As the conversation drifts – no pun intended – Lance talks about Ajaz’s bowling during those three seasons in New Zealand as a prime reason for the same: ‘I think he developed that skill of his where the ball drifts in towards the right-hander and then grips and turns away, during those seasons, bowling through long periods for us in the Plunket Shield.’

In conditions suited to pacers, Ajaz Patel mastered his craft by bowling, and bowling more. He does not tire. We saw that on display during the Mumbai Test.

Ajaz's Central Stags colleagues were in Wellington on Friday ahead of their T20 Super Smash game on Sunday, 5 December.

‘Everyone in the team was watching the Test from their rooms, cheering Jazzy (Ajaz's nickname) in the WhatsApp group that he’s a part of,’ says Lance, explaining a surreal moment he had witnessed with the team.

‘I shed a tear the other day,’ Lance adds with a smile. ‘I’ve seen how hard he’s worked over the last 12 seasons that I've been involved here. I’ve seen him go from this shy boy to then, growing into the father that he is now. I'm extremely proud of him, and happy for how all his hard work has paid off.’

Why not? Ajaz’s feat, after all, is so humongous that they will discuss it for weeks, years, decades, and perhaps even in the next century (are we not discussing Laker today?).

In his career terms, this throws a nice, big question fray for New Zealand Cricket. How to manage Ajaz Patel at home?

Playing at home, every team goes for a surface that complements their strength. New Zealand's once-in-a-generation pace attack has shown how that works. But with Ajaz, and a group of quality spinners available, has the time come for New Zealand Cricket to prepare pitches that will assist spin?

‘There are a lot of discussions going around the same in the New Zealand Cricket circles,’ says Malan, head coach at the Auckland Cricket Association (ACES). ‘We’ve rooted the suggestion that the last two rounds of our domestic competition, around the end of March or start of April, be played on used surfaces. This helps spinners get a feel of bowling in assisting conditions. It also allows batters to figure out what it means to play on a surface that’s not just about throwing your hands through the line of the ball and it's an easy couple of runs.’

Throwback to February 2020, when @im_sandipan spoke to @AjazP in Wellington, ahead of the NZ-IND Test series.

"I know international cricket is a different beast. For me it's about keeping the game simple."

Ajaz’s achievement is also a testament to how efficiently New Zealand Cricket has been working on individuals from diverse backgrounds. In the bigger picture, an idol for kids from immigrant families all around the world.

Lance shares how there are talks in New Zealand that in 10 years, 60% of players potentially representing the Blackcaps could be born out of the country.

One has to wonder how many of them will be sweet-toothed, nicknamed after the only player to score 400 runs in a Test innings, and take ten wickets in a Test innings. They will certainly have an idol to follow.